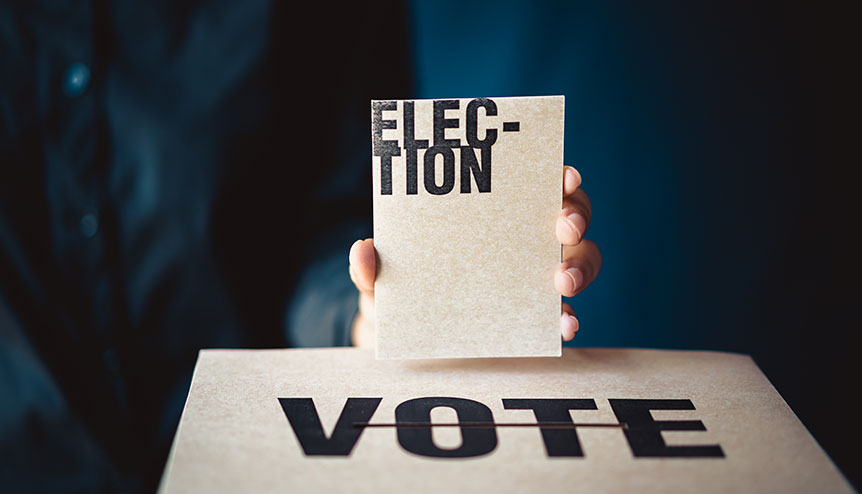 The UK General Election on December 12 will determine the course of the country’s history in many ways, not least in the context of its relationship with Europe and the wider world. One group that holds many of the cards, voters with their roots in the Indian sub-continent, can no longer be expected to vote predictably – either for Labour or Conservatives.

The most crucial outcome of the first-ever survey of British Indian voter intentions ahead of the December 12 General Election is to provide a factual basis on which to make some assessments about this important electorate. The Indian diaspora in the UK is estimated at around 1.5 million and with the India Inc. 0ptimus Poll reaching out to a cross-section of those of voting age, the scenario that emerged confirmed some traditionally held notions but also helped bust many myths.

The biggest myth to be bust by the poll was that British Indians tend to vote as some sort of homogenous group, largely influenced by their background or roots. This could not be further from reality as it became clear that this electorate is just as influenced by hardcore bread and butter issues and the biggest question of our generation–Brexit.

“Brexit will be the central election issue – so the third of the British Asian vote who voted Leave and the two-thirds who voted Remain will see the choice of leaders and parties rather differently,” notes Sunder Katwala, Director of integration think tank British Future.

“The undecided voters don’t look that different from other polls. It tends to be among ex-Labour voters who are sceptical about the government and about the Opposition. On this poll, the Conservatives would need to pitch more to Remain 2016 voters to move up above,” he says, in reference to a solid 18 per cent chunk of undecided British Indian voters flagged by the survey, who can still be wooed by any of the parties.

And, it is a definitive focus on Brexit and its many uncertainties that also revealed a major jump in favour of the Liberal Democrats – campaigning to revoke Article 50 and reverse Brexit. 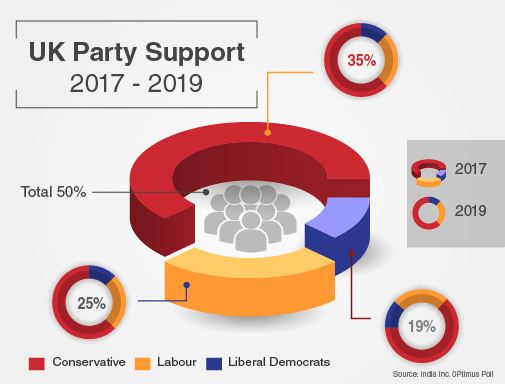 It was the only party to see a statistically significant hike of support from 2017 to 2019, jumping 10 points in two years from 8 per cent to 18 per cent. This contrasts sharply with the fortunes of the two main parties, with Labour down a massive 12 points since 2017 and the Tories down a mildly respectable 4 points.

The hundreds of Indian as well as diaspora-owned businesses based in the UK have all been understandably on a wait and watch approach, like the wider economy. However, as one business leader indicated, it is a matter of perception more than immediate impact because voters tend to vote from their hearts as much as their minds.

“Our customers and suppliers are located in various countries across the globe. We do not have manufacturing facilities or physical inventories in the United Kingdom which could get impacted by current Brexit uncertainties,” said Dhaval Shah, President of TMT Metal Holdings Ltd, which topped the annual ‘India Meets Britain Tracker 2019’ of the fastest growing Indian companies in the UK.

“Our business model renders us immune to the current political climate and negotiations of the UK,” he noted. 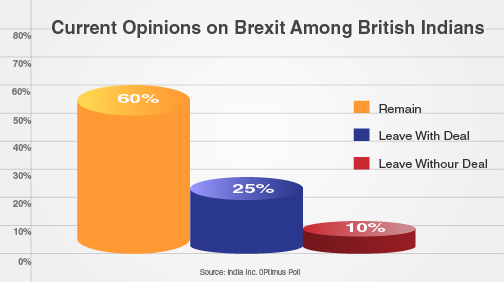 Nearly half of party switchers (47 per cent) in the poll conducted by YouGov in mid-November reported changing support due to Brexit policy, and an additional 9 per cent say that it is due to the respective parties’ attitudes towards British Indians.

A prominent figure in the British Indian community, who did not wish to be identified, told ‘India Global Business’ that the Labour Party re-stating its interventionist stance on Kashmir in its manifesto launch last week may well cost them some crucial undecided swing votes.

“Comparing India’s equalisation of citizens rights in Kashmir to humanitarian crises in failed or repressive states is an insult to the world’s largest democracy. British politicians would be well advised to spend time on resolving their own problems and not trying to interfere in the internal matters of other countries,” he said.

These factors may not be the only deciding factor for voters with their roots in the Indian subcontinent but would certainly play a contributory role in determining the final swing for or against a party, especially among the undecided.

How each party pitches its bilateral relationship with India would also most certainly be an important contributory factor, as the poll indicated.

“We will also forge stronger links with the Commonwealth, which boasts some of the world’s most dynamic economies such as India, with which we already share deep historical and cultural connections,” notes the Conservative Party manifesto, a more definitive statement on the issue in contrast with the Labour manifesto which chose to hark back more to the past with a pledge for a formal apology for the Jallianwala Bagh massacre.

“If a Jeremy Corbyn led Labour government comes into power, bilateral relations could see turbulent times over Kashmir; and if it were a LibDem-led government New Delhi will have to develop a fresh set of engagements with the new party leadership. Only the return of a Boris-led Conservative government focused on bilateral trade, diaspora and security relationships could possibly ensure a true strategic partnership,” he said.

Therefore, the only aspect that has been reaffirmed in this timely poll of British Indian voting intentions is that this electorate can no longer be viewed through a historic lens of simply choosing one party over the other in a sort of herd mentality. They are clearly just as nuanced and divided as the country as a whole, which means each of the parties have the chance to reach out to them in time to convince them of their respective credentials – not just on Brexit but also on how they pitch their relationship with India.

There is a lot riding on the results that are thrown up on December 13, which would equally determine the course of UK-India relations as well as the other big questions of our time.