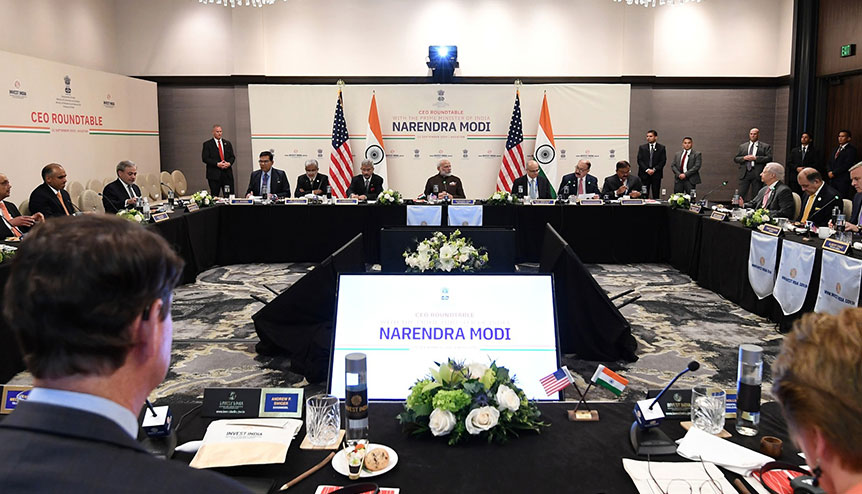 The Indian Prime Minister’s meeting with the heads of major US oil companies and his government’s tango with the Middle East and Russia will ensure that the country gets adequate hydrocarbon supplies to power its growth aspirations.

The recent attack on Saudi Aramco’s plants, which resulted in the suspension of 5 per cent of the world’s crude oil supplies, led to violent swings in global oil prices. In the two days following the attack, Brent futures went up by almost 20 per cent to $71.95 per barrel and WTI futures by 15.5 per cent to $63.34.

This brought home the importance of ensuring India’s energy security and highlighted the criticality of Indian Prime Minister Narendra Modi’s meeting with leaders of the US oil and gas industry in Houston on 21 September, which had been fixed months in advance.

Why the Houston meeting with oil CEOs is important

Modi met the virtual who’s who of the US and European energy sector. His round table included the CEOs of ExxonMobil, BP, Total, Tellurian, Schlumberger, Baker Hughes, Cheniere Energy and Dominion Energy, among others.

India already imports about $4 billion worth of oil and gas from the United States and there are reports that this could double in the near future. Also, US Secretary of State Michael Pompeo has promised India adequate crude oil supplies in the wake of US sanctions on Iran.

Engaging US energy majors is important not only for India’s energy security but also for other collateral benefits. It is well known that energy companies are among the top campaign contributors to the Republican Party. Thus, having a long-term relationship with these companies and their influential CEOs, who enjoy tremendous clout in Washington, makes political and strategic sense for India.

The deals in the pipeline

Modi, who drove to the meeting with the head honchos of oil companies straight from the Houston airport, tweeted: “It is impossible to come to Houston and not talk energy! Had a wonderful interaction with leading energy sector CEOs. We discussed methods to harness opportunities in the energy sector. Also witnessed the signing of MoU between Tellurian and Perronet LNG.”

He was referring to the agreement to negotiate the import of five million tonnes per annum of LNG by the public sector Indian company from the US energy behemoth’s Driftwood project in Louisiana in which the Perronet may also invest $2.5 billion.

Subject to further due diligence and necessary approvals, Tellurian and Perronet are expected to finalise the agreement by 31 March 2020.

Earlier reports said the world’s most valuable energy company, ExxonMobil Corporation, is likely to enter a partnership with the public sector GAIL India Ltd to set up a green energy platform in India. India may also pick up a stake in ExxonMobil’s offshore Stabroek block in Guyana, which has estimated reserves of more than five billion oil-equivalent barrels.

And as has been widely reported in the Indian media, Indian oil majors have invested about $4 billion in US shale gas assets.

Why energy security is important

India imports 82 per cent of its oil and gas requirements, mostly from the Middle East but also from the US, Russia, Africa and South America.

In 2018-19, the country’s oil import bill was about $112 billion, a jump of about 30 per cent from $88 billion the previous year. Local production has been stagnant, and this is unlikely to change in the foreseeable future. Even the production of oil from overseas fields owned by Indian companies hasn’t been rising fast enough to compensate for stagnating local output.

This will have to change quite drastically if India is to achieve the target set by Modi of reducing oil and gas imports to half the current figure by 2030. As an interim goal, the Indian government is targeting a 10 per cent reduction in oil and gas imports by 2022.

But energy is vital for India to achieve its goal of becoming a $5 trillion economy by 2025 and provide 24×7 power for every Indian by 2022.

Coal is still the largest source of energy in India. It accounts for 72 per cent of India’s electricity generation and is also the main fuel used by sectors such as cement and steel.

BP Energy Outlook 2019 estimates that coal’s share in India’s primary energy consumption will fall from 56 per cent in 2017 to 48 per cent in 2040. This is more or less in line with the estimate of NITI Aayog, the government’s official think tank, which put the figure at 44 per cent. The share of oil will fall from 29 per cent to 23 per cent while that of renewables will rise five-fold over this period to 16 per cent.

This is expected to change quite dramatically as India’s per capita energy consumption of 521 kgoe in 2014, which is one-third of the world average, first catches up and then overtakes its share of the world’s population.

Pushing this surge in energy consumption is the Modi government’s aggressive and ambitious target of setting up 175 GW of renewable energy (RE) – solar, wind and biomass – capacity by 2022. According to data available on the website of the Government of India’s Ministry of Power, the country had an installed capacity of slightly more than 80 GW of RE, or a little less than half the target, as on August 31, 2019.

Beyond that, India has an even more ambitious goal of setting up 450 GW of RE capacity by 2030 but this will come with its own set of problems.

Solar power generation stops in the evening, leaving the grid with a sudden and massive withdrawal of supply between 5 pm and 6 pm every day. The grid faces a similar “shock” from wind power withdrawal when winds stop. This can result in grid instability and huge outages if alternative sources of power are not available to substitute for the power that is withdrawn.

But India lacks sufficient capacity in these. The alternative is battery storage systems.

In India, power demand peaks in the evenings when solar power plants can no longer generate electricity. But battery storage technology is not yet sufficiently advanced to store the quantum of power needed to compensate for the shortfall.

This makes it imperative for India to secure adequate and reliable supplies of gas as a fuel for power plants that can ramp up or ramp down on demand since hydro and nuclear power plants have long gestations periods and entail huge environmental costs.

The problem with coal

India is the world’s second-largest coal producer after China with a share of 10 per cent of the global output and has the fifth-largest coal reserves in the world, according to IEA. India’s share of world coal consumption is 13 per cent. 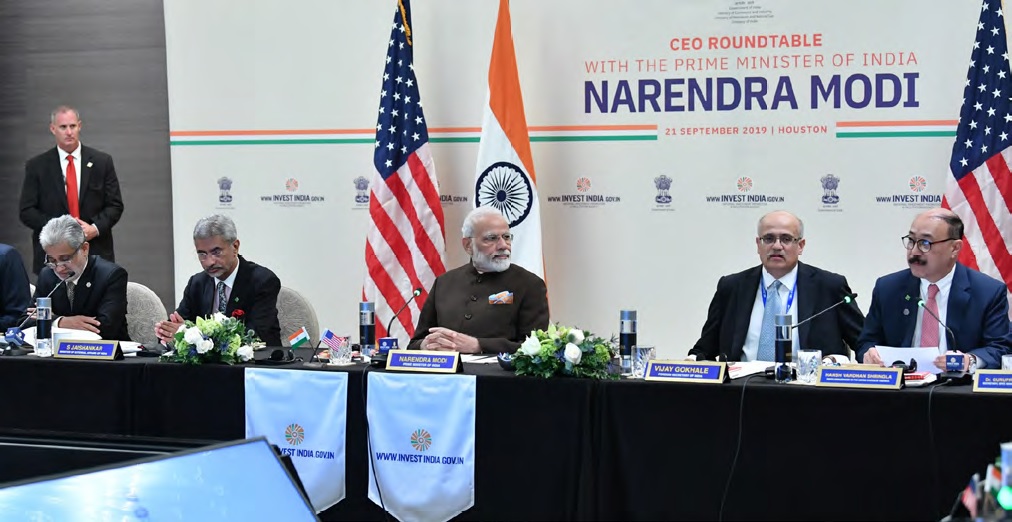 However, 87 per cent of Indian reserves of this mineral fuel is non-coking coal, forcing the country to import 80 per cent of its coking coal needs. Then, India’s coking coal reserves are of a poorer quality than those available elsewhere. This means that India will have to continue importing this fuel whose use is expected to triple to 180 million tonnes by 2030.

India also has to import about 20 per cent of its thermal coal requirements as Coal India Ltd (CIL), till recently the monopoly merchant producer of this commodity, which accounts for 84 per cent of the country’s coal production, is unable to increase its output at the required rate.

According to rating agency Crisil, CIL’s production will touch one billion tonnes in five years against its target of doing so this year. Since the government has not moved on facilitating private participation in merchant coal production despite passing a law to do so last year, India’s coal demand continues to outstrip domestic supplies.

The country will have to move fast on easing land acquisition and environmental and forest clearance norms to facilitate rapid expansion of coal production in the country.

The Middle East, the main source of hydrocarbon supplies to India, is a volatile region. US sanctions on Iran, which supplied up to 10 per cent of India’s crude requirements until recently, has adversely impacted India’s energy security.

India has turned increasingly to Russia to diversify its crude supply sources. But this, too, has fallen foul of US sanctions on Moscow. Despite this, ONGC Videsh, the foreign investment arm of India’s national oil explorer, has a $6-billion investment in the Sakhalin oil fields in the region.

Last year, India and Russia agreed to a sea link between Vladivostok and Chennai that will cut down the transport time from 40 days at present to 24 days, making it easier less costly to import Russian crude.

Thus, the Modi government will have to carefully finesse its hand to manoeuvre between these competing global geopolitical conflicts to diversify crude sources and ensure India’s energy security.

To guard against any major disruption in energy supplies, the Indian government is building a strategic reserve of 5.33 million tonnes of crude in Mangalore (Karnataka), Vishakhapatnam (Andhra Pradesh) and Pudur (Karnataka) to provide for 10 days of supplies. 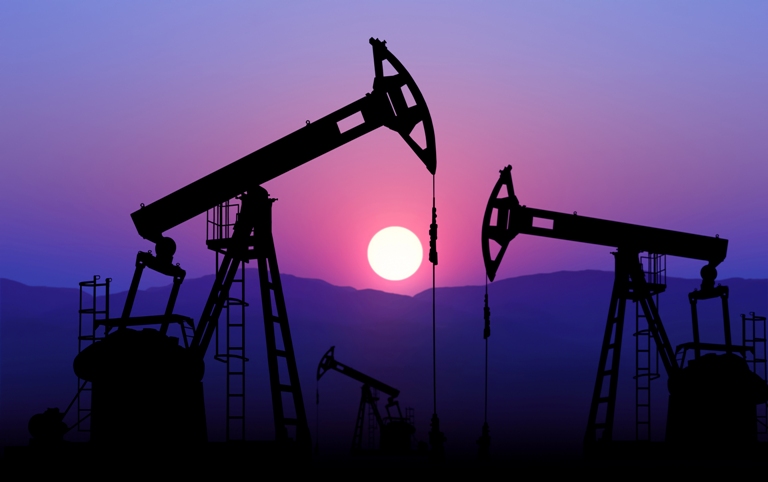 The Abu Dhabi National Oil Company (Adnoc), has provided half the crude oil that is stored at the 1.5 million tonne Mangalore rock cavern and is also providing oil for the 2.5 million tonne storage facility at Pudur in Karnataka.

Then, Saudi Aramco will invest $15 billion to buy a 20 per cent stake in the oil refining and petrochemicals business of Reliance Industries, India’s largest private sector company.  This will ensure reliable supplies of crude, the main raw material for Reliance’s refining and petrochemicals businesses, at a reasonable cost. A large Saudi stake will provide its Jamnagar refinery, the largest in the world, a secure insurance against Pakistani air and missile attacks in case of hostilities.

In a mutually beneficial deal, the Saudis will gain a secure market for 500,000 barrels of oil every day, a strong partner in the Indian market and an entry into this market of 1.3 billion consumers.

This will give the world’s largest oil producer a stake in India’s energy security.

India will also need to address some major internal challenges to ensure its energy security.

According to an EY report: “…While the country has surplus refining capacity and is an exporter of petroleum products, major investments will have to be made in the domestic upstream industry and to acquire hydrocarbon reserves abroad. Additionally, key areas of action are:

A more conducive policy environment coupled with an effective regulatory regime is, without doubt, the basis for accelerated growth of domestic energy resources. Energy security needs integrated action by all stakeholders.”