The Indian Prime Minister’s hard-nosed strategy of building bridges with the West is paying rich dividends; the US and Germany highlighted Beijing’s growing diplomatic isolation by blocking an insidious Chinese proposal to blame India for the June 29 terror attack on the Karachi Stock Exchange. 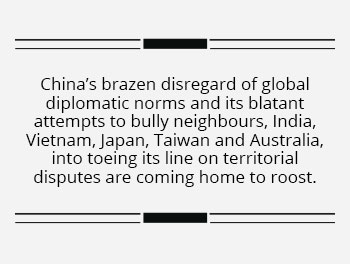 China’s brazen disregard of global diplomatic norms and its blatant attempts to bully neighbours, India, Vietnam, Japan, Taiwan and Australia, into toeing its line on territorial disputes are coming home to roost.

Beijing had to swallow its pride and take a diplomatic slap in the face when the US and Germany, two major Indian allies, stalled its efforts to lay the blame for the recent terror attack on the Karachi Stock Exchange at India’s door. 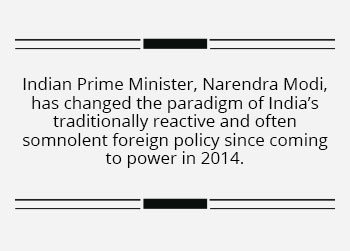 The attack on 19 June by members of the Baloch Liberation Army (BLA), which is fighting for independence of the mineral rich Baluchistan province from Pakistan, resulted in the death of 19 people, including four BLA militants. Pakistan Prime Minister Imran Khan blamed India for the attack, without a shred of evidence, and even before his investigating agencies had had a chance to begin the probe into the assault.

This was picked up by Pakistan’s so-called all-weather friend, China, which proposed a statement to the United Nations Security Council (UNSC), condemning the attack. Nothing wrong with that; but the insidious wording could be interpreted to blame India for being behind the attack, given that Khan and his hawkish Foreign Minister Shah Mehmood Qureshi had vitiated the atmosphere by openly blaming New Delhi.

Incidentally, India had condemned the terror attack along with the rest of the world.

Federal Chancellor Angela Merkel (r, CDU) and Donald Trump, President of the United States of America (USA), at the G20 summit in 2019. In a rare occurrence the US and Germany blocked China’s resolution based on a bogus claim by Pakistan that blamed India, a newly elected non-permanent member of the Council, for a terror attack in Baluchistan.

Why the statement was blocked

The UNSC routinely issues statements condemning terror attacks anywhere in the world, but with distrust of China running high in various global capitals, the free world thought it fit to give Beijing a sharp tap on the wrist.

China had placed its draft statement on a four-hour silence period. Under this protocol, if no country objects to the statement, it is deemed as acceptable to all and is then passed by the UNSC. However, the US and Germany both raised objections to the resolution that blamed a newly elected non-permanent member of the Council and blocked it. 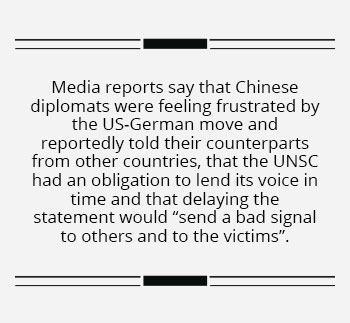 Media reports say that Chinese diplomats were feeling frustrated by the US-German move and reportedly told their counterparts from other countries, obviously quite oblivious to the rich irony of the situation, that the UNSC had an obligation to lend its voice in time and that delaying the statement would “send a bad signal to others and to the victims”.

It is not known if anyone there had the presence of mind to remind the Chinese diplomats that it was Beijing that had, for years, blocked the designation of Pakistan-based terror mastermind and Jaish-e-Mohammad chief, Masood Azhar, as a global terrorist.

In another slap in the face to both China and Pakistan, the UN finally designated Azhar as a global terrorist in May 2019, after Beijing was forced by pressure from the US and the EU to lift its technical hold on the proposal to blacklist him, a decade after the Indian government approached it on the issue.

Activists protest against the terror attack in Pulwama, India by Pakistan-based terror mastermind and Jaish-e-Mohammad chief Masood Azhar. China had for years blocked the designation of Azhar as a global terrorist.

Indian Prime Minister, Narendra Modi, has changed the paradigm of India’s traditionally reactive and often somnolent foreign policy since coming to power in 2014. He has built bridges with the US, the UK, the EU, Japan, Australia, ASEAN and South Korea among several other countries and ensured that all of them develop a vested interest in India’s strategic and diplomatic wellbeing. It is this hard-nosed diplomacy that is now paying India rich dividends.