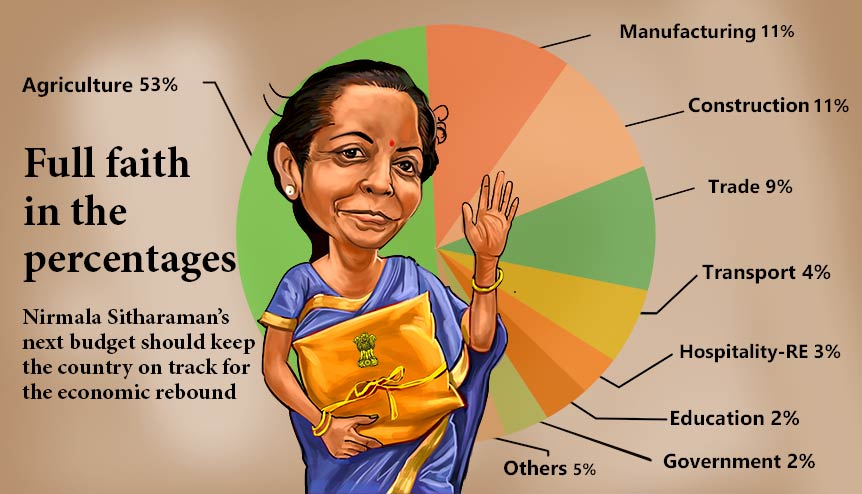 Most major global agencies expect India to record steroid charged growth in 2021, albeit from a reduced base. The much-criticised measures by the government and the RBI to ensure that the country’s macro-economic indicators remain in good shape are now expected to pay rich dividends.

Like the mythical phoenix rising from the ashes, the Indian economy could put its recessions blues behind it and emerge as Asia’s fastest growing economy this year, overtaking even China in its growth trajectory.

Several highly respected global research houses, such as Nomura, Goldman Sachs, Barclay’s and DBS Bank, among others, have projected growth rates of between 7.7 per cent and more than 10 per cent for both the current calendar year as well as the next financial year.

With the Covid pandemic slowly coming under control and with the vaccine rollout barely a fortnight away, economists are cautiously optimistic that the path to economic recovery is becoming clearer with every passing week, 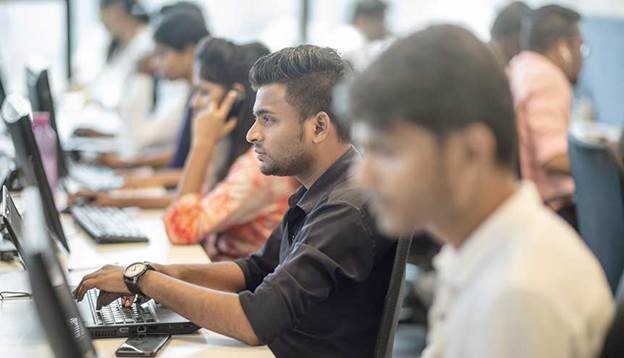 Top financial institutions have predicted India’s growth in 2021, the highest rate forecast for any economy.

Goldman Sachs has gone a step further and projected India to grow in double digits this year, helped by the low base of 2020 – the highest rate forecast for any major economy.

Barclays, on the other hand, has projected a growth rate of 9.2 per cent in calendar year 2021. “After a sharp fall in GDP in 2020, we expect a reasonably sharp bounce back in 2021 as India will likely go back to pre-Covid GDP levels in H2, 2021,” Rahul Bajoria, Chief India Economist at the global bank told the Indian media.

Indian economy maintains its growth momentum as Non-petroleum exports increase by 5.3% in Dec over last year. Driven by double-digit growth in core areas like pharma, chemicals and electronics, Make in India is graduating to Make for the World. 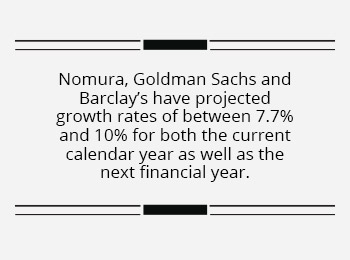 To put these figures in context, Nomura expects the next fastest growing economies, China and Singapore, to expand at 9 per cent and 7.5 per cent, respectively, this year.

India’s comeback has taken many seasoned economy watchers by surprise. Noted economist and Consulting Editor of The Economic Times, India’s largest and most respected financial daily, said in an interview to the newspaper: “…Unless there is some huge resurgence of a new kind of coronavirus, a new variant, I would expect that in 2021 this upsurge (in growth) will continue and because of that I would not be surprised if we record GDP growth of 11-12 per cent. This would be a good thing. A nice bounce back from a really low thing. To add to the economic trend, because the vaccines have now come, vaccinations will begin and I hope they will expand very fast from January onwards because in the service economy, people are still afraid to go out for shopping, for travel and tourism and for entertainment.”

He admitted that he had erred in criticising the government for keeping its powder dry by doling out a fiscal stimulus of just 2 per cent of GDP when countries like the US, Japan and other had announced much higher spending plans to boost consumption.

“A very large number of countries in the world went for a massive fiscal deficit. Japan did 21% straight away. The USA did 10% straight away and with the latest thing we will also go to 20%. India has kept its fiscal stimulus at no more than 2% of GDP. I have been a critic of this. I have been a critic saying we are not doing enough for the poor. We are not doing enough to push out purchasing power. If you do not have a large enough fiscal stimulus, you will not revive the economy fast enough either. I will only say that I have turned out to be wrong to the extent that I did not believe the economy could revive to this extent without a stronger fiscal stimulus,” he said.

The path of fiscal prudence adopted by Indian Finance Minister Nirmala Sitharaman, in the face of strong advice to the contrary by seasoned economists, has ensured that India’s macro-economic indicators such as the debt-to-GDP ratio, fiscal deficit and money supply have remained or are likely to remain within a manageable band, leaving the government with more headroom to provide fiscal space for the economy to grow in the coming years. 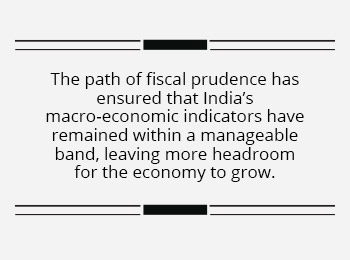 Here, the example of India’s reaction to the 2008 global financial crisis offers a stark contrast. The then Congress-led UPA government had opened its purse strings to tide over the panic caused by the worldwide economic crash. This led to a skyrocketing fiscal deficit, high inflation rates, which forced the Reserve Bank of India (RBI) to increase interest rates, which, in turn, squeezed money supply in the economy and derailed the country’s growth trajectory for more than a decade.

The aftershocks continued long after the immediate crisis had passed. Between 2013 and 2016, the rupee depreciated about 20 per cent against the dollar to about Rs 66/dollar levels. It has been much more stable since then, falling about 10 per cent over the next five years.

This time, the economy seems to have weathered the Covid-induced shock without the government resorting to any extreme measures – leaving the country much better placed for an economic rebound.

All eyes on the Union Budget 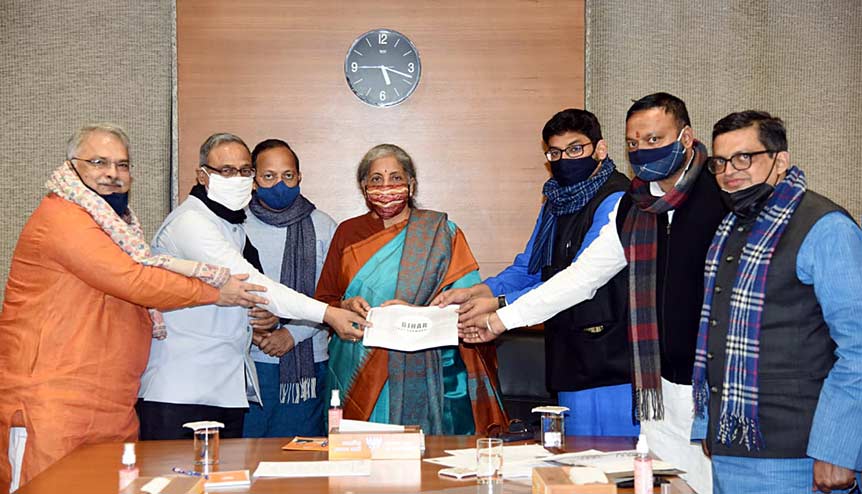 Minister of Finance and Corporate Affairs Nirmala Sitharaman with officials and members of various civil society organisations, as a part of the pre-budget discussions. Economists will be looking out for measures to boost consumption.

The next big event to watch out is the Union Budget that Sitharaman will place before Parliament on February 1. Various stakeholders have come out with their wish lists for the same.

Economists will be looking out, in particular, for any measures she will announce to boost consumption. The government has already announced that it will focus on increasing spending on infrastructure, which has a massive multiplier effect on economic activities across hundreds of sectors. 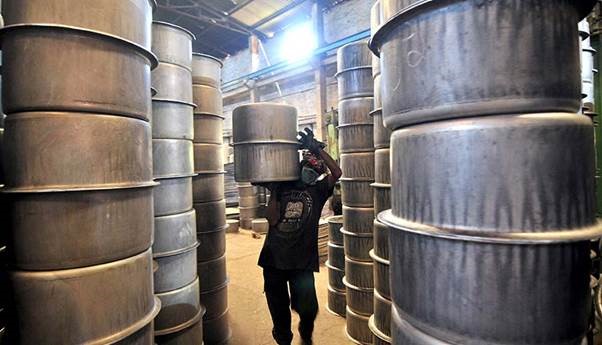 Reforms spearheaded by Indian prime minister Narendra Modi has seen the country attracting FDI in various sectors via numerous schemes. The RBI is also trying to chip in with its contributions.

But these are usually long gestation projects that take time to deliver the desired results. More important this time will be the short-term measures that provide more disposable incomes to more people in the immediate term.

In this context, the recent reforms announced by the Narendra Modi government – on attracting FDI in 10 sectors via the production-linked incentive (PLI) scheme, the new farm laws and labour codes as well as the entry of the private sector into hitherto prohibited or restricted sectors such as defence, space and atomic energy, among others, will help propel the economy on to a higher growth trajectory. 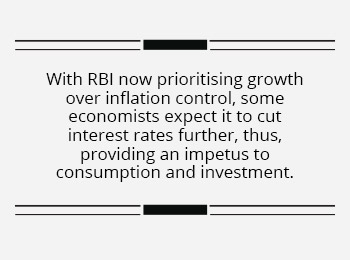 RBI must chip in

The RBI will also have to play its part and continue with its accommodative stance. With the central bank making it clear that it now prioritises growth over inflation control, there are some economists who expect it to cut interest rates further if the price situation shows signs of coming under control. This will bring down the cost of money for Indian businesses and help improve consumer sentiment – a key prerequisite for people to once again start spending on discretionary goods.

An account of how ⁦@PMOIndia⁩ is leading us from the front during the pandemic.
“Responding swiftly to each trial thrown up by the war against Covid, Modi displayed a firm belief in optimising social capital and in the power of the collective.” https://t.co/16CpCobfcy

The early tidings look propitious. Car sales, house purchases, the shipments of consumer durables and many other items are showing a marked uptick after months of depressed sentiment.

If these can be sustained – and the forthcoming Budget will give us a better pointer towards that – there is every reason to be optimistic that 2021 could be the year in which the Indian economy shakes off its lethargy and gets back on the high growth trajectory.