Skip to content
Modi-Xi offsite holds lessons for other powers 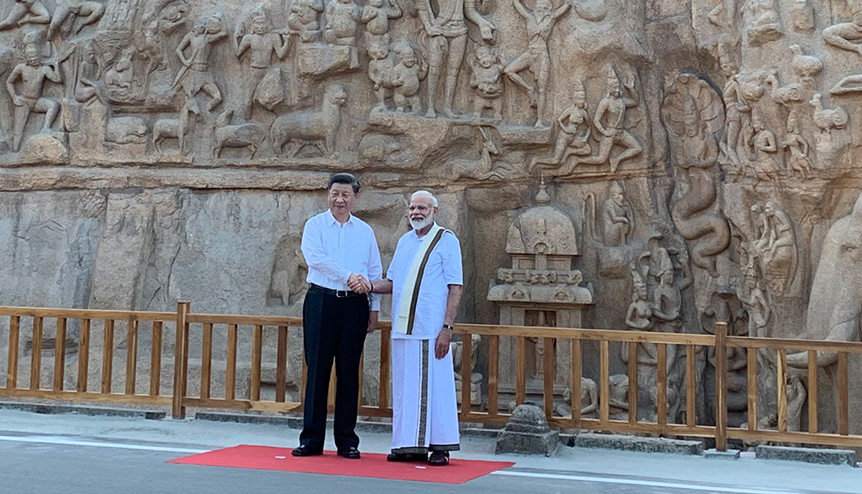 The two neighbouring powers – not inimical to each other but not quite on the same page on most issues either – have thankfully found a way of discussing their bilateral issues, warts and all.  This is a lesson that other powers could also learn from, writes India Inc. Founder & CEO Manoj Ladwa.

You’ve heard of corporate offsites, where company bigwigs travel to exotic destinations to discuss strategies and iron out issues in an informal setting. Well, Indian Prime Minister Narendra Modi’s “informal summit” with Chinese President Xi Jinping at the historical Mamallapuram in the southern Indian state of Tamil Nadu is the closest you’ll get to a diplomatic or geo-strategic offsite, where the leaders of the two most populous nations in the world will discuss bilateral and multilateral issues that, in one way or the other, will have some impact on the lives of 40 per cent of the world’s population.

It’s a new way to conduct diplomacy. Not very often do you get summit meetings, even informal ones, that are almost completely unstructured.

From the tour of the historical 1,700-year-old port and temple town, which traded with China in antiquity using the sea route, to dinner to discussions at a local resort, Modi and Xi will spend at least seven hours together during which, according to media reports in India, they will discuss “all issues”, including controversial ones such as removing Kashmir’s special status, to Indian reservations about allowing Chinese telecom equipment maker Huawei supply 5G equipment to India, to China’s reluctance to balance the gaping trade deficit by importing basmati rice and pharmaceutical products from India.

China, on its part, is wary of India’s embrace of the US and the recent meeting of the Quad – US, India, Australia and Japan – foreign ministers in the US, which it considers a democratic alliance aimed at stymying its rise.

But India and China also share considerable areas of convergence. The two countries have often found themselves on the same side at the World Trade Organization (WTO) when they have combined to see off challenges from the West. Then, climate change and the fight against global warming is another area where New Delhi and Beijing are on the same side combating a phalanx of western nations trying to pass off a part of their obligations to poorer countries. These are also likely to be on the table.

Trade and strategic relations are expected to make up the major part of the discussions. China is very keen that India signs up for the Regional Comprehensive Economic Partnership (RCEP) but India is wary that this will make India’s $53-billion trade deficit with China balloon further.

Analysts and foreign policy analysts in India expect the shadow of Pakistan to loom large in the room. Pakistani Prime Minister Imran Khan has recently been assured by Xi that the Chinese side is “paying close attention” to the situation in Jammu & Kashmir.

Only last month, China had pulled out all stops, somewhat unsuccessfully, to bat for Pakistan at the United Nations General Assembly.

But China has its own fishes to fry as well and the Indian side will be keen to find out how far Xi will go for his country’s so-called “all weather friend”.

We will know more about the Mamallapuram “summit” when (and if) the two sides issue statements at the end of the one-on-one as well as delegation-level meetings.

But that, for me, is a topic for another day. What is most important is that two neighbouring powers – not inimical to each other but not quite on the same page on most issues either – have found a way of discussing their bilateral issues, warts and all, in a manner that holds a lesson for other powers around the world.