Skip to content
Keys to ensuring more crop per drop 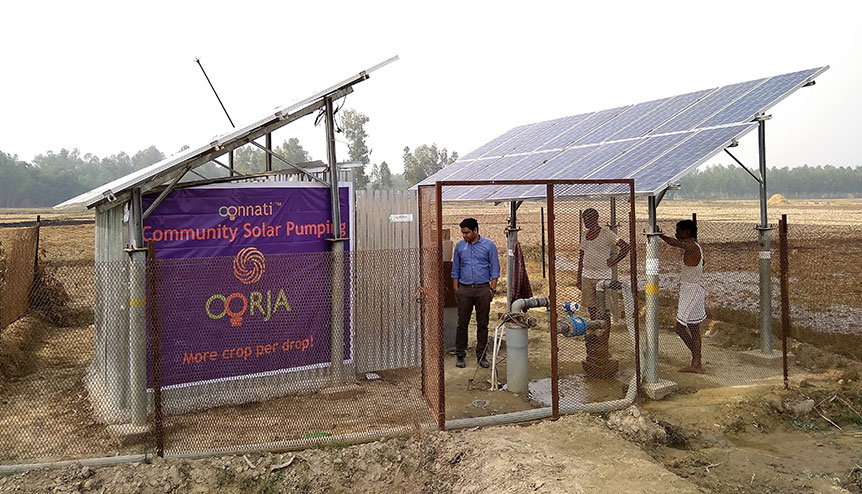 Walk across a farm in northern India, and the chances are, you’ll hear the stutter and purr of one of 10 million diesel-powered pumps used across the country for irrigation. These pumps are very expensive to run, easily consuming one litre of diesel fuel per hour. As they have many moving parts, the engines frequently break down and require servicing, an added burden for the farmer. And as the clouds of smoke they emit attest, they are also heavily polluting. Diesel used for irrigation accounts for a staggering 5 per cent of India’s annual CO2 emissions. This makes use of diesel engines a major contributor to manmade climate change – the effects of which are ironically already felt by the same farmers who have no choice but to use them to extract groundwater when rainfall is scarce.

Not only is diesel-based pumping pricy and polluting, it’s also painful. During the dry zayed season from March until June, groundwater in underwater aquifers drops to its lowest levels, before being replenished by the monsoon. Diesel pumps, which sit on the surface of the farmland, often cannot extract water during this period. This leads to a common phenomenon where farmers are forced to dig a pit 7 to 8 metres deep around the tube well in their fields into which they lower the diesel engine, hoping to extract water for a few more days. Mostly, this effort is in vain, and so farmers lose out on the fertile zayed season when they could grow a third crop, in addition to the rabi winter crop (mostly wheat) and kharif monsoon crop (paddy). This contributes to restricting farmers’ meagre opportunities to earn income. 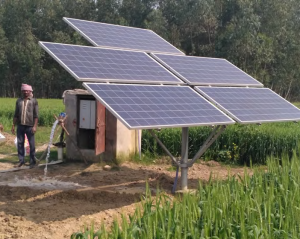 Solar-powered irrigation is a cheaper alternative when we consider the total cost over the entire lifecycle of 20 years since solar photovoltaic systems are virtually free to run. Upfront, however, the investment required for a solar pump is around £1,000 (Rs 85,000) per kW – far too costly for most farmers. 80 per cent of farmers in India own very small land parcels of less than 2 acres, and many are subsistence farmers living hand to mouth. Around 60 per cent of farmers share diesel pumps by renting them from other farmers, which is the most costly method of irrigation, as they pay for engine rental as well as fuel. It is these smallholder farmers who stand to gain the most from having access to yield-enhancing solar pumping technologies.

Oorja Development Solutions, a social enterprise I co-founded with Amit Saraogi, has developed a disruptive solution to the irrigation crisis in India. We design, install and operate PAYG Community Solar Pumps targeted at smallholder farmers in northern and eastern India. Oorja installs large solar pumps of 3 to 5 kW, which can pump enough water for groups of 15-20 smallholder farmers with adjacent land. Oorja sells water to farmers as a service: water consumption is metered and sold on a pay-per-use basis at a tariff that is 20 per cent cheaper than diesel-powered irrigation. Any farmer with land near the pump can access solar pumping services – without any upfront cost. What’s more, the submersible pumps that Oorja installs can extract water year-round, freeing farmers from the hassles of lowering their diesel pumps.

By reducing the cost of irrigation and enabling year-round water access, farmers can boost their crop yields by up to 30 per cent. They can also grow water-intensive crops, such as vegetables, herbs and spices, which have high market value and which they can sell to earn a large profit – potentially doubling their income! Community Solar Pumping is, therefore, a low-carbon and cost-effective solution to the irrigation and wider agrarian crisis in India. 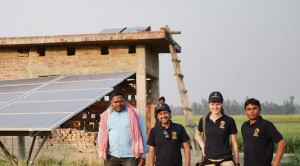 We did not hit upon this model by accident. Oorja’s mission as a company is to alleviate energy poverty, boost income and productivity, and combat climate change in rural areas of India. While we were conducting household energy demand surveys in villages of Uttar Pradesh and Bihar, we heard from villagers that they would rather reduce their expenses on diesel pumping on their farms than pay for solar lights in their homes. We also found out that there is a solar pumping subsidy scheme that has been active in India since 2014. In its current form, known as KUSUM, the scheme offers up to 60 per cent subsidy from the state governments for individual farmers to purchase a solar pump. However, there are several barriers for the uptake of the scheme – most farmers have never heard of KUSUM, and when they have, they are generally wealthier and well connected. Though a further 30 per cent loan is also available from national banks, farmers still need to cough up at least 10 per cent of the upfront cost from their savings. Because of financial constraints, bureaucratic hurdles, and the social capital needed, the KUSUM scheme and its forerunners have largely excluded poor and smallholder farmers – around 90 per cent of the farming population.

Oorja set about looking for ways to make solar pumping technology affordable to smallholder and low-income farmers as a replacement for diesel pumping. Oorja’s Community Solar Pumping service – which is branded as Oonnati, meaning “progress” in Hindi – solves this problem as any farmer can access cheaper water for irrigation year-round without any capital investment.

In late 2018, Oorja launched the Oonnati service in Eastern Uttar Pradesh, where it installed three pilot Community Solar Pumps in Bahraich district. One Oorja customer, Shankar Lal, expressed the benefit he had seen from switching to solar pumping on his farmland in Bahraich, Uttar Pradesh. “Oorja has enhanced my self-respect”, he claimed. “Earlier, the process of pumping water for irrigation required a lot of effort. Oorja’s solar water pumping service is reliable and economical and the process of pumping water for irrigation has been simplified a lot.”

Aside from cheaper irrigation, year-round availability of water has encouraged farmers to start growing high-value crops. Many of Oorja’s 60 or so customers have planted peppermint, maize, sugarcane, and other water-intensive or cash crops during this zayed, that they will be able to sell at a higher profit than grain crops.

Having witnessed the early signs of success from the Oonnati model, Oorja now plans to replicate the Community Solar Pumping scheme in other under-electrified and groundwater-rich areas of India. Our next target state is Assam, where we have partnered with a local NGO called Seven Sisters Development Assistance (SeSTA) that already works with smallholder farmers in tribal and other marginalised groups.

To support the launch of the Oonnati solar pumping service in Assam, Oorja has just launched a crowdfunding campaign. The donations received will support the installation of six community solar pumps forming a “cluster” within a radius of five kilometres, enabling them to be serviced by a small local field team. This project is a critical milestone in Oorja’s goal to build inclusive economies by keeping the poor, underserved and marginalised at the forefront.

Clementine Chambon is the CTO of Oorja Development Solutions and Faculty of Engineering, Department of Chemical Engineering, at Imperial College London.

About the Author: Dr Clementine Chambon