Billions of dollars in FDI are gushing into the country and the government along with its valued partners must ease out all limitations to ensure that this process is not hampered.

Indian Prime Minster Narendra Modi’s orchestration of reforms across the country and his statement of intent that India is open for business is beginning to pay dividends if the signs of activity during the past few weeks were to act as a marker in the economy.

Foreign Direct Investment (FDI) into India has crossed $40billion so far this year from the US and it is a case in point that with the rapid loss of trust in China coupled with the fact that India is resilient and dependable the dollars are flowing in. In recent weeks at least $20billion has gushed into the markets with blue chip companies like Google, Facebook and Walmart leading the way.

These are just a few of the marquee names but they add credence to the theory that investor confidence in India is soaring and faith is being reposed not just by the West, but also by the Middle East and the Far East as well. Coupled to this is the fact that at least seven Indian pharma companies are in the race, partnering different global entities, towards developing the vaccine tipped to combat and defeat the coronavirus that has struck millions across the world. When this is project is successful it will once again leverage India’s equity within the global community.

It is also not lost on anyone that India currently ranks third in the list of most-suitable locations for global manufacturing among 48 countries and this report card emphasises on cost competitiveness and operating conditions and this is largely thanks to the slew of reforms introduced by the government. 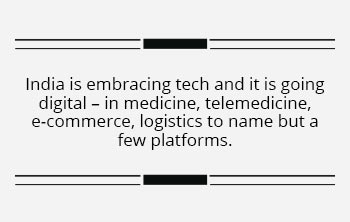 This could be the ‘shining moment’ that the government has been waiting for given that while most businesses and economies across the world are folding up investors are directing their dollars towards India in a unique show of faith.

India is embracing tech and it is going digital – in medicine, telemedicine, e-commerce, logistics to name but a few platforms.

But, in order to be the global disruptor and game changer that it seeks to be, perhaps it would also be prudent for the authorities to reflect inwards and assess what more needs to be done in order to ensure that the investment tap is constantly on.

What better moment then for the government, ministers, senior bureaucrats and leaders of industry to come together and ensure that India’s sum is greater than its parts? Easing of rules, regulations and painful limitations need to be carried out on a war footing. Any hurdle that acts as an impediment to business needs to be removed after due-diligence is applied. But speed is of the essence.

The intent is clear, but the challenges lie in the speedy execution of processes. Towards this, the concept of Atma Nirbhar Bharat, or the concept of protectionism, must co-exist perfectly with the ambitious intent of foreign investors who believe that amidst all the unrest and uncertainty that the world has been gripped by, it is India that can show the way.