The Indian External Affairs Minister’s recent visit to Tunisia highlights India’s commitment to engaging with both larger and smaller economies of Africa alike.

India’s External Affairs Minister S. Jaishankar made his maiden visit as a minister to Tunisia last month as part of a broader outreach to the African continent.

The choice of Tunisia as the first country of visit and not South Africa or Kenya, that are more prominent economies, is significant. As a non-permanent member of the UN Security Council, India has found ready support from many of the smaller African nations on global issues like terrorism. At the same time, China’s involvement tends to be transactional in nature and concentrated on the bigger economies with more resources leaving the smaller states in the background. Jaishankar’s visit was a bid to not only show that India does not treat Tunisia in the same manner but also to recognise the latter’s repeated support.

During the visit, the two nations signed a memorandum of understanding for the creation of a Tunisian-Indian centre for innovation in information and technologies in the African nations. Talks with various government officials including Tunisian Minister for Foreign Affairs Sabri Bachtobji also revolved around the different aspects of bilateral and multilateral cooperation as well as several issues of regional and international issues of common interest. The focus is clearly on information and communication technology, scientific research and agriculture.

A tiny country at the northernmost tip of Africa, Tunisia is strategically placed and well connected with the rest of the world. It is considered to be the only fully democratic sovereign state in the Arab world. With a GDP of $36 billion, it is the 15th largest economy of the 54 countries in the African continent. Bilateral trade between the two countries stood at around $360 million with India enjoying a trade surplus.

Both the sides also discussed the next edition – fourth, of the India-Africa Summit 2020 (IAFS-IV), which is scheduled to be held in India in September 2020. The third edition of the Summit was also held in New Delhi in October 2015. That was the beginning of the NDA government resetting India’s relationship towards Africa from transactional to a more deep-rooted one.

The meet also discussed preparations for an upcoming 13th session of the Indo-Tunisian Joint Committee and different aspects of bilateral cooperation while taking stock of regional and international issues of common interest. 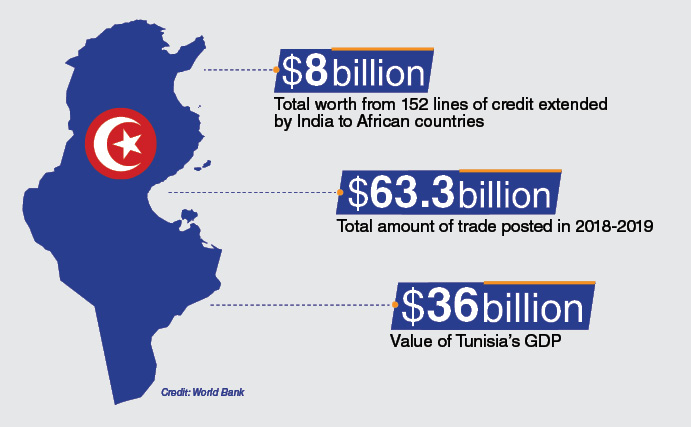 Viewed in isolation, the visit to Tunisia may have little significance. Yet, in the larger context of India’s outreach to Africa, it assumes importance. The world economy at large continues to be fragile and the historic narrative that Africa will ultimately be the next continent to see rapid development and growth once the other emerging economies start slowing down has only gained ground. The African economy at large grew by 2.4 per cent in 2019 and is expected to grow by 3.9 per cent this year and over 4 per cent next year. That is well off the historic peaks, but it does show that the economy at large has bottomed out. Something that cannot be said for any of the other continents. 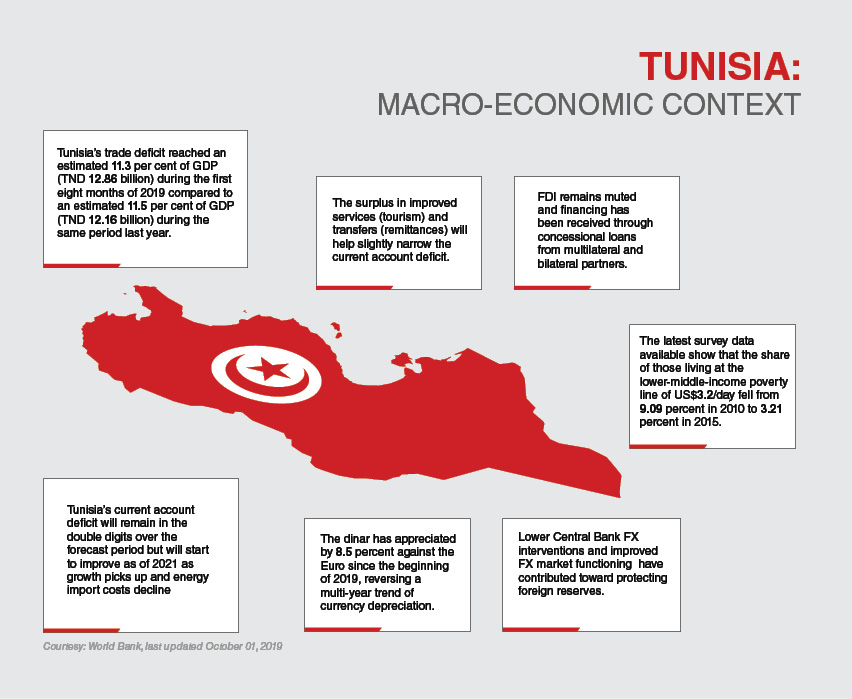 *To know more on investment opportunities in Tunisia, read the segment ‘Hotspot.’
**Read more on Minister Jaishankar’s announcement on the possibility of air corridors for trade with Central Asia in the ‘Region Focus’ section.

Not for the first time, India finds itself in the crosshairs with arch-rival China, which has a longer and deeper association in the continent, especially for commodities and minerals. While it has tried to increase its involvement with the continent, it has been outmuscled and dwarfed by China.

India has not given up though and Jaishankar’s visit to Tunisia was not a one-off. In the last five years, Indian leaders have paid 29 visits to African countries. Forty-one African leaders participated in the last India-Africa Forum Summit in 2015, where India agreed to provide concessional credit worth $10 billion for the next five years. By the end of 2017, India had cumulatively extended 152 Lines of Credit worth $8 billion to 44 African countries while also unilaterally providing free access to its market for the exports from 33 least developed African countries.

India economic engagement with Africa is also substantive. Its trade with Africa totalled $63.3 billion in 2018-19 making it the third-largest trading partner of Africa, edging past the US during the process.

It comes at a time when China’s own involvement is in a bit of a lull given the downturn in its economy and the sluggishness of the global commodity market. It only reiterates China’s image as that of an economic coloniser, something that is well documented in the Indian Ocean countries of Sri Lanka and Maldives.

India wants to present itself as a more empathetic soft power and an ally on whom the whole of Africa can rely. Armed without a caravan of goodies but just a box of chocolates, Jaishankar’s trip highlights the aspect that Tunisia and Africa can count on India even when the world looks the other way.