Skip to content
Investing in toilets not such a waste

Investing in toilets not such a waste 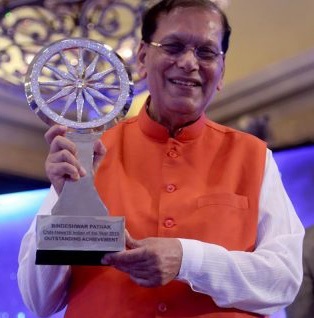 The founder of a leading social movement in India believes Global Indians can offer the perfect solution to India’s shortage of toilets.

The founder of Sulabh International, Bindeshwar Pathak, has called on Global Indians to invest in the Swachh Bharat mission to make India open defecation free by 2019.

Dr Pathak, who was recently in London to attend a conference on Smart Cities, said non-resident Indians (NRIs) in the UK and around the world can play a vital role to help India build nearly 12 crore toilets by 2019 to realise Prime Minister Narendra Modi’s Clean India vision.

He said: “This is a big task, but together we can do it and non-resident Indians can play a pivotal role in this. This is a unique opportunity for the NRIs to show their love for the country.”

Breaking down the figures, he said the 2019 target could be met with ease if the nearly 2 million NRIs each contributed to building six toilets over a span of three years. An individual toilet costs approximately $500, which means six toilets would cost a total of $3,000 (Rs 2 lakhs), a cost that could be spread over a period of three years.

“​If all the NRIs come forward and contribute to make India clean and a better place, this beautiful dream will become a reality,” he said.

Apart from the construction of toilets, Dr Pathak has been leading a movement since 1970 with Sulabh to provide sanitation solutions to the poor. Under corporate social responsibility, Sulabh is collaborating with a number of public sector undertakings (PSUs) in the country and corporate houses to build public and individual toilets across the country.

Sulabh claims to engage over 50,000 people and has so far constructed nearly 1.3 million household toilets and 8,500 public toilets.

In India, an estimated 600 million people, or 120 million households, lack access to a clean toilet, with the government on a major drive to build more under the Swachh Bharat Abhiyan.

Getting sanitation to billions of under-served is particularly challenging because it is not just a question of building these toilets. According to local research, people often need to be encouraged to use new facilities and cultural factors can prove a deterrent.

India’s struggle with public sanitation is different from the experience of urbanisation in Europe and North America in the 19th and 20th centuries as there is the sheer volume of waste and scarcity of space to contend with it.

However, Swachh Bharat has the benefit of prime ministerial backing in a way that no Indian clean-up campaign has had before.