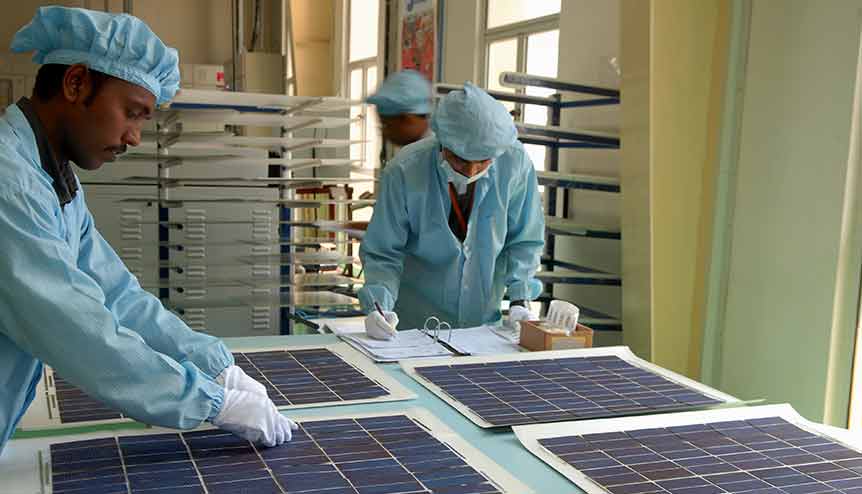 In this second instalment of our series on India’s solar sector, we analyse the switchover from fossil fuels to renewables at play in India.

As of 31st March 2020, India’s solar installed capacity reached 37.627 GW, with the lowest capital cost per MW globally to install solar power plants. The Modi government’s initial target of 20 GW capacity for 2022 was achieved four years ahead of schedule, while in 2015 the target was raised to 100 GW of solar capacity (including 40 GW from rooftop solar) by 2022, targeting an investment of $100 billion. It also needs $330 billion in investments over the next decade to power its renewable energy dream.

Related Stories: Why India is the new hotspot for renewable energy investors

One of the ways in which India is facilitating investments in the solar sector is by setting up nearly 42 solar parks to make land available to the promoters of solar plants.

The sheer scale of India’s solar power journey so far becomes clear when you consider that in the decade ending on 31st March 2020, India expanded its installed solar power capacity by 233 times from 161 MW to 37,627 MW. Rooftop solar power accounts for 2.1 GW across India, of which 70% is industrial or commercial. In addition to its large-scale grid-connected solar photovoltaic (PV) initiative, India is also busy developing off-grid solar power for local energy needs. And the projects are making a huge difference to those areas of the Indian society that need them the most: solar products have increasingly helped to meet rural needs, with millions of solar lanterns and solar cookers sold in the country reducing the need for more-expensive kerosene and cooking gas.

However, India’s solar goals remain among the most ambitious renewable energy targets in the world, far more than those set by developed countries. Analysts concur that to achieve its lofty targets, India will need major reforms in the transmission, distribution and grid storage while promoting overall stability of the sector with consistent policies. 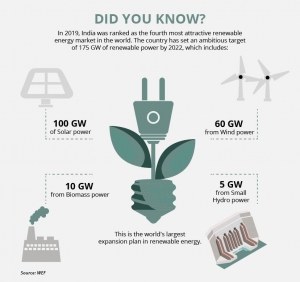 India is poised to become the fourth largest renewable energy market worldwide by 2030, accounting for 9% of all global renewable energy use after China, USA and the European Union. India could have 23 million electric four-wheeled vehicles and 300 million electric two-and-three wheelers on the road by 2030, according to a study by IRENA. It found that structural changes – including highly improved and sustainable options for both urban and longer-distance travel – could shift 7% of India’s passenger activity from individual vehicles to electrified mass transit.

The technology and policy choices for the future thus need to significantly increase the share of renewables in the energy mix by 2030, and that’s one reason why Modi has set the ambitious target of generating 450 GW of renewable energy by that year.

Challenges and opportunities in the sector following the Covid-19 disruption

The Indian renewable sector’s dependence on China for sourcing some key raw material and components (for example in solar installations) has undoubtedly created a disruption in the sector due to the coronavirus pandemic. In the past couple of months, the industry has struggled to procure module glasses and wafers required for solar installation systems, with Chinese companies supplying about 80% of solar cells and modules. A lockdown in eight affected provinces of China crippled the supply chain, since most of those provinces are the hubs of solar module manufacturers.

However, India also sees that disruption as a great opportunity to promote self-reliance, as highlighted by Modi in his speech. 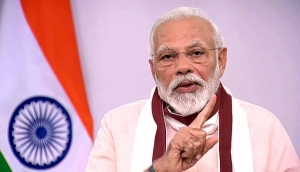 According to the Confederation of Indian Industry (CII), the solar energy sector is expected to see a rise in the component prices due to the production bottlenecks and supply chain and logistics constraints, as container companies have halted load pick-ups from Chinese ports and transporting it to other countries. But the confederation has also urged Indian PV manufacturers to consider it as a great opportunity for “Make in India” in the solar sector and build a strong and competitive domestic solar manufacturing industry.

Building indigenous capability during an uncertain global economic outlook would also help the industry emerge competitive post-Covid. The All India Solar Industries Association has urged the government to consider ramping up domestic manufacturer production and exempting solar module producers in special economic zones from 25% safeguard duty on imports of cells and modules for domestic facilities.

The Vocal-for-Local call in manufacturing

The call by PM Modi to promote self-reliance in manufacturing and be vocal-for-local finds perfect resonance in this industry. If solar engineering, production and construction companies can drastically reduce their dependence on China, the Indian solar industry will vastly improve its cost stability and quality control, according to research firm GlobalData. The lockdowns in India and China have forced manufacturers to stockpile their modules, with a resulting decline in Chinese solar PV modules.

“Indian engineering, production and construction companies are using this lockdown time to form post-COVID strategies. Indian module manufacturers might strategize to reduce prices since they have a chance to take a larger market share until the Chinese market recovers,” says Somik Das, a power analyst at GlobalData. “In essence, it would also be an excellent time to implement domestically manufactured solar PV cells and wafers, which otherwise are imported from China.”

Indian manufacturers in the solar should utilise the lockdown to improve internal processes and increase the technical skillset of employees, he says.

To begin with, India’s efforts to boost economic growth by rapidly transforming itself into a manufacturing hub are set to drastically increase the demand for energy in a country that is home to about one sixth of the world’s population. Increasing prosperity may offer more Indian households to buy appliances like refrigerators and washing machines – thereby increasing the demand for electricity.

While it’s true that India still relies heavily on coal for its power, accounting for around 60% of its total electricity generation, several analysts say fossil fuels will not be able to meet India’s rising energy needs in the long-term. 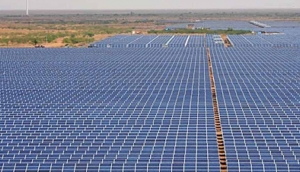 In addition, travel restrictions to halt the spread of coronavirus have speeded up the switch from coal to renewables in the country. The world’s second largest coal consumer has seen its energy demand collapse by nearly 30% during the lockdown which started on March 25, with coal generators bearing the brunt. “I think we will see the peak in coal use for power generation this decade. There is potential for India to really surprise the global community and contribute to the decarbonisation story while doing it in a very cost-effective way,” Tim Buckley, director of energy finance studies for the Australia and South Asia region at the Institute for Energy Economics and Financial Analysis (IEEFA), was quoted as saying by Climate Home News. 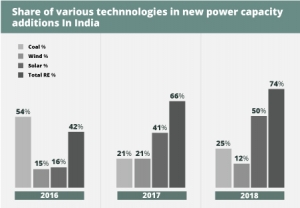 Pursuit of the right policy frameworks have already lowered the cost of producing and storing solar energy substantially, compared to coal. The cost of adding solar electricity today stands at about Rs 2.5 per unit generated, compared with around Rs 4.50 for new coal capacity. Even coupled with more expensive batteries to store electricity for after dark, solar energy was auctioned at a cheaper price than new coal earlier this year. An analysis by IEEFA found that renewables delivered more than two-thirds of India’s new generating capacity additions in the 2019-20 fiscal year. Therefore, the switchover from fossil fuels to renewables is already at play in India at a faster pace than anyone anticipated.