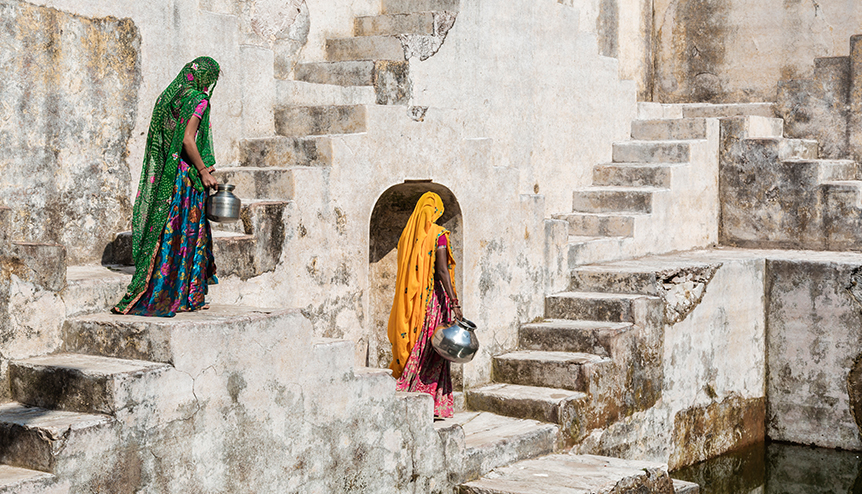 Against the backdrop of the devastating floods in Kerala, an expert weighs up the manifold threats faced by the country in the field of water management – from water scarcity to flooding.

Water management will be one of the greatest threats to India meeting its economic potential. The threats are manifold. Both quality and quantity are challenges. Pollution is widespread, providing significant threats to health and in turn economics.

Around 70 per cent of India’s water is thought to be contaminated; only one-third of wastewater is treated while the presence of arsenic and other chemicals exacerbates the threat to health. Around 200,000 deaths a year are attributed to lack of access to safe water while 500 children per day die from water-borne diseases.

Quantity is equally a problem – India experiences both water scarcity and annual flooding. This year, Kerala was worst affected, though rivers flowing from the Himalayas frequently flood large parts of North and North East India.

Many in India feel that the country is already experiencing the effect of climate change – essentially more intense weather, more often. Fundamentally, the challenge for India is that around 90 per cent of its rainfall occurs in the relatively short monsoon season. Thus, for part of the year there is a risk from flooding; for the rest of the year the challenge of storing water. Just over half of India’s agricultural land remains rain-fed, hence vulnerable to the vagaries of the Monsoon. The more intense the rainfall, the greater the challenge of water storage.

The government’s think tank, NITI Aayog, recently published a report comparing flood management between India’s states. Generally, those states already facing water scarcity scored higher than those where water is more abundant. Kerala performed worst out of India’s southern states. But India’s northern states, home to half the country’s population, performed worst. The report included some concerning forecasts. It predicted that 21 cities, including New Delhi and Bengaluru, would run out of groundwater by 2020; it argued that India is already experiencing its worst water crisis, and that by 2030 demand will out-strip supply, potentially costing 6 per cent of GDP.

The challenges are not confined to India, but are regional, with the same rivers flowing between countries and acting as a source of wealth but providing the threat of disaster. Bangladesh split from Pakistan in 1971 in part as a response to poor government response to extreme flooding the previous year. Now, Pakistan too faces challenges of water scarcity combined with occasionally severe flooding.

Given the shared challenge, regional flood management or flood forecasting could be seen as an opportunity for regional engagement. Instead, more often, the shared rivers are seen as a source of contention. Each downstream riparian has blamed flooding on the upstream country opening dams. Lack of data sharing allows this belief to circulate unchallenged, and at times there appears to be an element of truth to the claims. Water management in India is the responsibility of its states. There are disputes between states over the allocation of water and some blamed the Kerala floods on dams being opened upstream as reservoirs came close to over-flowing.

Putting safety and environmental concerns to one side, dam-building in upstream countries is seen through a securitised prism in those downstream. India fears Chinese activities on the upper reaches of the Brahmaputra; Pakistan is critical of India’s dam-building. In this context, India’s offer to help Afghanistan construct a dam on the Kabul river, which flows into Pakistan, does little to augur regional harmony. Power asymmetries coupled with a lack of trust lead countries to assume the worst rather than work together to use hydraulic infrastructure to limit the impact of heavy rainfall.

What are the solutions to the challenge? Cape Town recently averted a severe crisis as it approached “Day Zero” – the day it would run out of water. There a range of carrots and sticks were introduced to encourage reduced water usage. The starting point in India is different. Many consumers still see water as a fundamental human right, or a gift from God. Farmers are an important electoral constituency. Many states feel they will only be elected by promising farmers free power, with which they can over-pump groundwater, exacerbating the water crisis and undermining the finances of state electricity companies.

Something between 70 per cent and 90 per cent of water is consumed by farmers and some innovative schemes have been introduced to encourage lower consumption, using drip irrigation for instance. Western advice has long been to introduce charging for water usage. But consumers are reluctant to pay for water (or electricity) unless they receive a guaranteed supply. And where charging schemes have been introduced in India, the outcomes have been mixed. When faced with charges, some farmers use less water. In other cases, however, the guaranteed supply allows a shift to more water intensive cash crops, so farmers use more water. Thus, as a means of saving water, the impact of charging varies contingent on the local geographies.

Alternatively, there is a growing emphasis on assessing the costs of the water crisis, and exploring how averting these costs could create a revenue stream. One study suggested that the provision of sanitation in rural India could provide a market of $25bn. Some were surprised at India’s Prime Minister, Narendra Modi, when he stressed that providing sanitation would be a priority. But it is a policy that works on two levels. Politically, it is popular with women. Economically, averting sickness from poor sanitation means that people can work; ill-health can rapidly push poor people towards poverty.

As water usage shifts towards industry and urban India from agriculture, a range of measures will need to be taken to avert a water crisis, focussing on limiting consumption, both through carrots and sticks, and micro-level actions to maintain existing infrastructure. Leaking pipes cause significant waste at present. Limiting agricultural consumption will require successful initiatives to be up-scaled, rapidly. Lessons from water scarce states need to be learnt by those that currently have a greater abundance of water. Some in India still look at water through a technical, engineering mind-set, whereby large-scale engineering projects will provide the solution.

The NITI Aayog report suggests that this approach is evolving, and that the realisation that the solution requires a multi-layered set of responses is becoming more widely accepted.