Under the project, 139 cities across the country are being trained to integrate climate risk into civic planning as part of broader plan to modernise Indian cities with everything from high-speed internet to better air quality and water management systems.

India is expected to be home to seven megacities with a population of more than 10 million by 2030, and projected to add 416 million urban dwellers by 2050.

With such ambitious growth of India’s urban landscape comes intertwined pressure on the environment, services, infrastructure provisions and public health. As the tangible effects of climate change take their toll on India’s major cities, they have only worked to expose the outdated infrastructure of several of them. 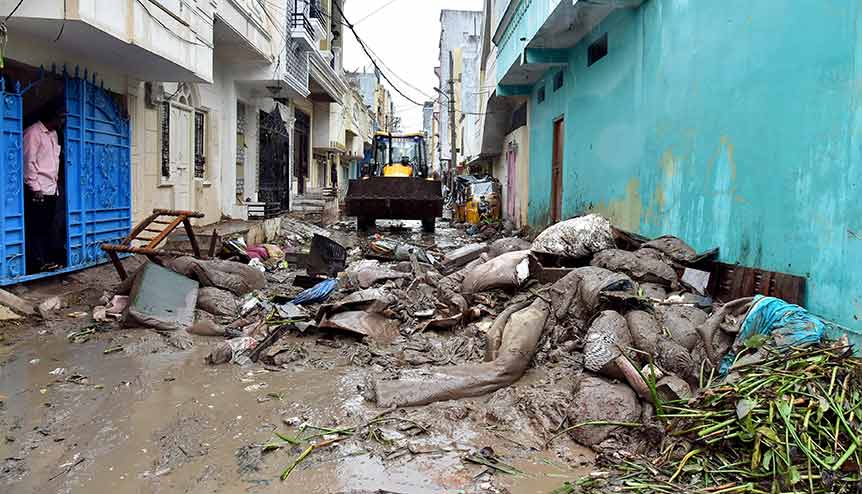 A view of household articles damaged in the heavy rain lying outside several homes following inundation of Low-lying areas at Baba Nagar in Hyderabad. India’s IT and digital city has seen severe loss of infrastructure.

The southern Indian tech hub of Hyderabad is a classic example.

Once dubbed Cyberabad and at the forefront of India’s warm embrace of IT and digital technology, the city – home to India offices of Microsoft and Google – this month saw its heaviest rainfall in a century, which left 70 dead and about $77 million in severe damages to roads and rain-water drainage infrastructure.

“Cities are experiencing huge variability in climate… one year there is flood, another year water scarcity,” said U Rajasekar, who heads the Climate Centre for Cities at India’s National Institute of Urban Affairs (NIUA). “It is not about looking at the past but looking at the future… how we can enable future development through informed action,” Rajasekar told Reuters.

In ClimateSmart cities Alliance meeting, Sh. Kunal Kumar, JS & MD @SmartCities_HUA mentioned that as the Secretariat of the Alliance, @C3_NIUA will act as a market place to help you connect with #cities & other #stakeholders to jointly take forward initiatives.#ClimateChange pic.twitter.com/pKIn5QX4i0

With climate change rapidly emerging as the deciding factor in adversely affecting urban development, India has launched a project last month to train cities to become climate smart – and the NIUA is engaged in helping India’s housing and urban affairs ministry to implement the project.

It’s a time-critical mission, considering that many Indian cities find themselves increasingly caught between worsening droughts, deluges and unseasonal floods.

Is India ready to get smart about its Cities?

Combined with the fact that urban planners have rarely considered growing climate risks in the past when designing major infrastructure projects, the Global Commission on the Economy and Climate estimates that such lack of preparation around the world will cost the global economy about $90 trillion – which is likely to be spent worldwide building and updating infrastructure by 2030.

Indian cities are preparing to counter the effects of increasing frequency of cyclones, floods, heatwaves, water scarcity and drought-like conditions.

That huge challenge is part of the reason why India is moving proactively to rapidly overhaul its urban infrastructure.

The “Climate Smart Cities Assessment Framework” will tackle the “increasing frequency of cyclones, floods, heatwaves, water scarcity and drought-like conditions”, according to a statement by the government. The effort is part of an ambitious broader plan to modernise Indian cities with everything from high-speed internet to better transport systems, in close synergy with the Smart Cities project launched by Indian Prime Minister Narendra Modi. Under the climate project, 139 cities will be trained to integrate climate risk in the planning stage of any major programme.

Hear out Mr. Piotr Lorens, @ISOCARP on urban planners’ role in creating an infrastructure for developing the best cities for the best outcomes.

View the entire discussion on ‘Refurbish and Reimagine the Future of Indian Cities’, here: https://t.co/urTsPRsCD6#SmartCitiesIndia pic.twitter.com/37gJ7tgdPh

The fast-evolving nature of climate change has also brought about other unintended results – such as a sudden rush of migration from affected areas to more urban habitats considered a safe haven by millions of Indians.

Future infrastructure being planned for all Indian cities will take into account rising populations, growing demand for roads and water, and the impact of climate change over the next 100 years.

According to Dr Binod Khadria, visiting professor at Jawaharlal Nehru University, and co-editor of the UN’s 2020 World Migration Report, “Extreme and sudden climate shocks, such as the 2013 flash floods in the Himalayan state of Uttarakhand, lead to temporary, and often reversible migration”.

A smart solution to socio-economic development

Gujarat gears up for growth amid pandemic

The Indian property sector is rumbling for a push forward

The challenges of urbanization in India have always followed similar patterns in other parts of the world, but now it faces the additional brunt of climate change. A 2019 analysis by political scientist Marc Helbling of the University of Bamberg in Germany examined urbanization trends in 133 countries between 1960 and 2016. After controlling for urbanization-influencing variables like per-capita income, trade openness, and population density, his model found that rising temperatures lead to higher levels of rural-to-urban migration over the span of decades.

On #WorldCleanAirDay, 38 South Asian cities have signed a pledge to use their authority towards reducing #AirPollution, in an initiative driven by #ICLEISouthAsia. Read full article here: https://t.co/AHcYwQ1rQS #CleanAirForAll pic.twitter.com/VuPBMIh4cI

Bedoshruti Sadhukhan, senior programme coordinator at ICLEI South Asia – part of the Local Governments for Sustainability network – said that this is a critical factor that the future infrastructure being planned for all Indian cities will take into account, including rising populations, growing demand for roads and water, and the impact of climate change over the next 100 years.

City planners are aligning towards UN agencies’s sustainability goals. They will consider projects like climate considerations in their management of water, waste and mobility, and in projects designed to make cities walkable and air breathable.

“Right now, the thinking which we want cities to take up is not happening strongly… but this (new project) is a chance to do things differently and do them well,” she said.

Under the project, cities will incorporate climate considerations in their management of water, waste and mobility, and in projects designed to make cities walkable and air breathable.

With several Indian cities having already collaborated on a long-term basis with UN agencies on global sustainability goals, the road ahead is thus smoother than what many thought. Virtual training has already begun with city planners and municipal authorities, officials said.

“These actions were happening in parts but we want to make climate part of their ongoing activity,” Rajasekar said. “Cities should be informed of future climatic and demographic changes.”