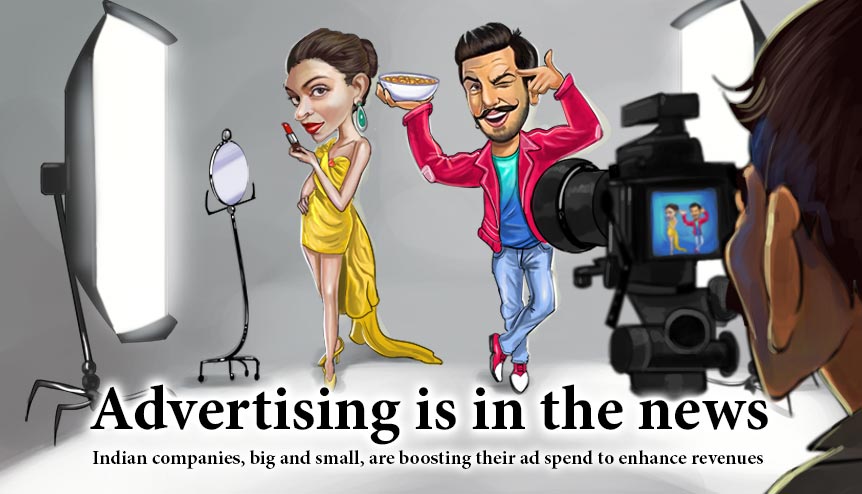 The coronavirus pandemic has failed to dent the excitement and exuberance of brand advertisement in India – with companies big and small rushing to muscle up their marketing spend and translate them into revenue critical to compensate for the Covid-19 slump.

From the above list of Indian celebrities and their brand endorsements this season, it seems clear that the coronavirus pandemic has failed to dent the excitement and exuberance of brand advertisement in India – with companies big and small rushing to muscle up their ad and marketing spend and translate them into revenue critical to compensate for the Covid-19 slump. 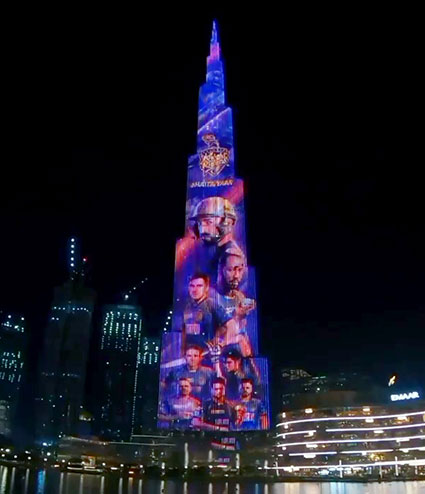 An illuminated view of Burj Khalifa in Dubai with players of Kolkata Knight Riders on it during IPL 2020. Advertising for this event has soared – thanks to digital platforms – even though there are hardly any fans in the stadium for the games.

Why India is ready for the global leap in innovation

Dhoni’s Chennai Super Kings might be struggling to win their matches at the Indian Premier League this season, but India’s former Captain Cool tops the list of celebrities in terms of recall value, according to a survey conducted by the Indian Institute of Human Brands (IIHB).

IPL itself is a story of supreme marketing success this season – although it’s being played in the United Arab Emirates this year. The sports arm of Reliance Industries Ltd, IMG-Reliance, has closed 36 deals worth a staggering $45 million across multiple brands and franchises for the 13th edition of IPL – raising a record revenue estimated to be double of the agency’s last year’s earnings.

The marquee deal for IMG-Reliance’s growth trajectory for this year has been Dream11’s title sponsorship of $30 million with the IPL. The Mumbai-based company has exclusively represented Dream11 on its BCCI & IPL related partnerships and also assisted them in securing cricketers as part of their activation plans. This is in addition to facilitating six team deals with Mumbai Indians, Chennai Super Kings, Delhi Capitals, Kings XI Punjab, Rajasthan Royals & SunRisers Hyderabad.

“The brand partners have consistently appreciated our strategic insights, our knowledge around the assets and most importantly, our ability to find a fine balance between rights holders & brands, to make the partnerships impactful for all parties,” said Nikhil Bardia, head of sponsorship sales and talents at IMG-Reliance.

But even as the pandemic rages and caseloads increase every day in India, what is triggering this rush of aggressive marketing and brand positioning despite talks of an economic contraction? 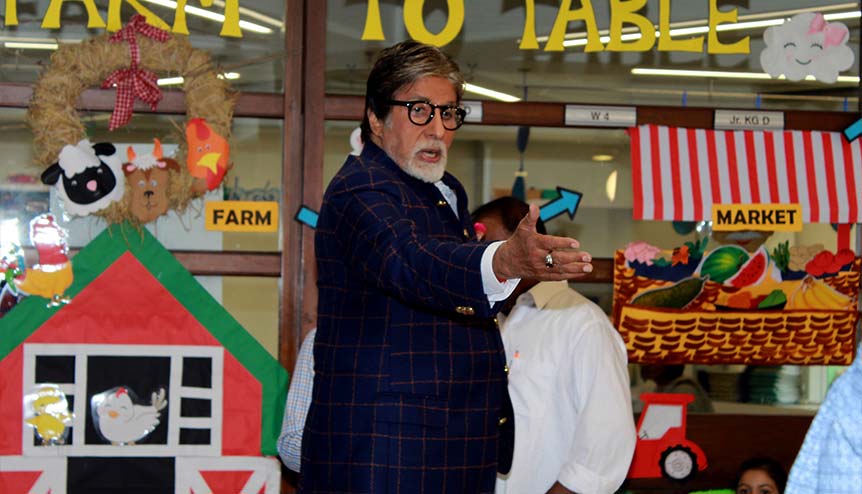 Bollywood actor Amitabh Bachchan as a brand ambassador for the ‘Banega Swachh India’ campaign. The marketing push by a few brands is expected to boost the confidence of entrepreneurs, especially the SMEs.

GoDaddy’s 2020 Global Entrepreneurship Survey sheds some light on the possible reasons in India.

According to the survey, micro-businesses were found to remain positive despite the coronavirus setbacks – so much so that 60 per cent of the very small business owners in India said that despite the slowdown and negative impact brought on by the pandemic, they were confident their businesses will continue to grow. The latest marketing push by a wide cohort of brands must therefore be seen in the framework of their efforts to boost the confidence of entrepreneurs, especially the SMEs, and encourage them to have a strong digital presence and identity.

…in significant measure by respondents. #PhonePe and #Swiggy were rated as the #best #ads of the ones on the IPL. But, the feedback on qualitative #goodness was inadequate and is mentioned here only as part of data received by default.”

It’s for this reason that GoDaddy has launched a mega ad campaign featuring its current brand ambassador Dhoni, deploying the power of his brand to go deeper into smaller markets where there is rapid digital acceleration. “Our aim is to help small business owners to build integrated online solutions. While one commercial talks about the need to get a website to take business online, the other focuses on the need of a domain name. Both are narrated quirkily,” Nikhil Arora, managing director of GoDaddy India, told Brand Equity.

Mobile ad-spend to rise by 38% next year 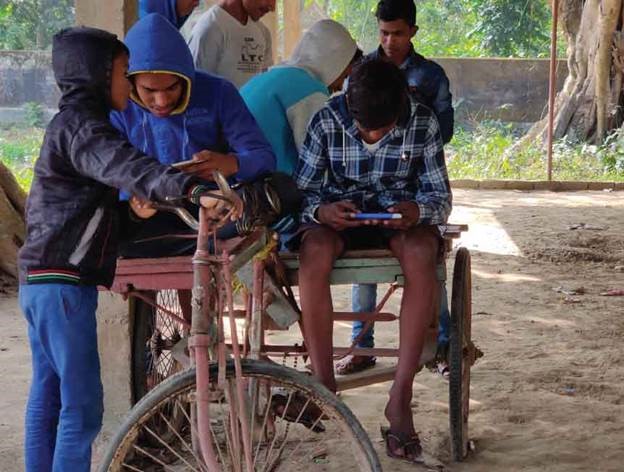 Thanks to the mobile penetration in India at least 66% of companies said they were looking to bolster their digital ad budgets as consumer behaviours have moved measurably during this time.

The positive outlook comes amid forecasts that mobile ad spending will rise by 38% in India over the next year, according to the latest New Normal – India and Southeast Asia: 2020 Report by InMobi.

Although the report found that marketers are looking to spend their budgets with 60% planning to focus on performance-based campaigns with ROI linkage due to the pandemic, more than 66% of them said they were looking to bolster their digital ad budgets as consumer behaviours have moved measurably during this time.

Digital ad spending is estimated to rise 33% over the next 12 months, while 87% of marketers surveyed were looking to increase their spending by up to 40% on in-app advertising. The tangible shift to outcome-based advertising is evident in the majority of marketers (60%) spending less than 40% of budgets on brand initiatives, although 12% said they would spend up to 100% of budgets on performance campaigns.

Our VP Omni Channel & Customer Success, GM, @_gurubhat_ will take the stage at #RESOLVE2020 hosted by #WixAnswers tonight at 8:15pm where he will talk about enabling quality customer experiences during COVID-19 and beyond. Register here to join in: https://t.co/Zm8DW693en pic.twitter.com/bXzg1r97L0

Despite the digital focus, many marketers conceded that omni-channel approaches remained a powerful tool to address customers in real-time.

“The dominant growth factor of digital comes from the proliferation of smartphones, backed by cheap data plans, that has shifted a significant amount of digital ad spends to mobile advertising,” said Nawal Ahuja, co-founder and director of Exchange4Media Group.

“The mantra for most brands and digital agencies this year is ‘mobile first’ and this sentiment is reflected in the growth projections for mobile ad spends. By the end of 2020, advertising spends on mobile devices is expected to grow by 41% to reach a share of 52% of the overall digital advertising market, overtaking spends on desktop.

Consumer glued to their mobiles 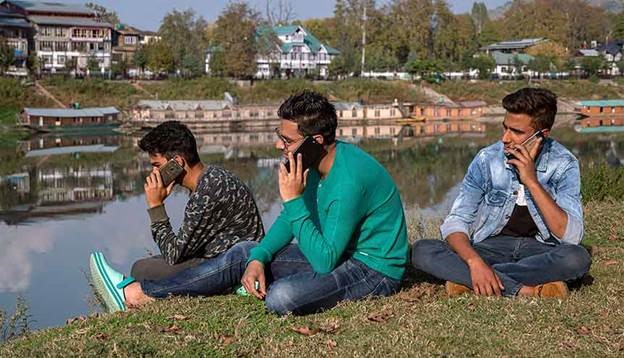 Mobile ad-spend is set to increase exponentially. The Indian media consumer has evolved to include ‘on the move’, ‘rural’ & ‘regional’ counterparts.

Spends on mobile devices are projected to reach a share of 64% of digital ad spends by 2022, as marketers target consumers glued to their mobile device. While growth of the digital medium has lived up to expectations, the challenges for the industry still remain the same – the lack of a common digital measurement system, data privacy, ad frauds and viewability concerns,” Ahuja remarked in the Digital Advertising in India 2020 report prepared by the Dentsu Aegis Network.

Here are your Dream11 GameChangers of Week 3

“India being a diverse country, digital will keep growing, especially with the rise of content platforms and its availability in multiple languages powered by the growth of 3Vs. From a predominantly ‘at home’, ‘urban’, ‘English print’ & ‘TV’ consuming market, the Indian media consumer evolved to include ‘on the move’, ‘rural’ & ‘regional’ counterparts, experimented with digital media in the early 2010s’, adopted social media in middle of the decade and started consuming digital videos voraciously after 2016,” said Tushar Vyas, president, growth and transformation – GroupM South Asia.

Indeed, with all the tech advancements transforming digital advertising and India’s resilient economy driven by a spirit of dynamic and frugal innovation, the ad and marketing industry remains in an extremely positive mindset about future prospects and that’s ultimately what reflects in the campaigns headlined by Dhoni, Shah Rukh, Virat Kohli or Akshay Kumar.