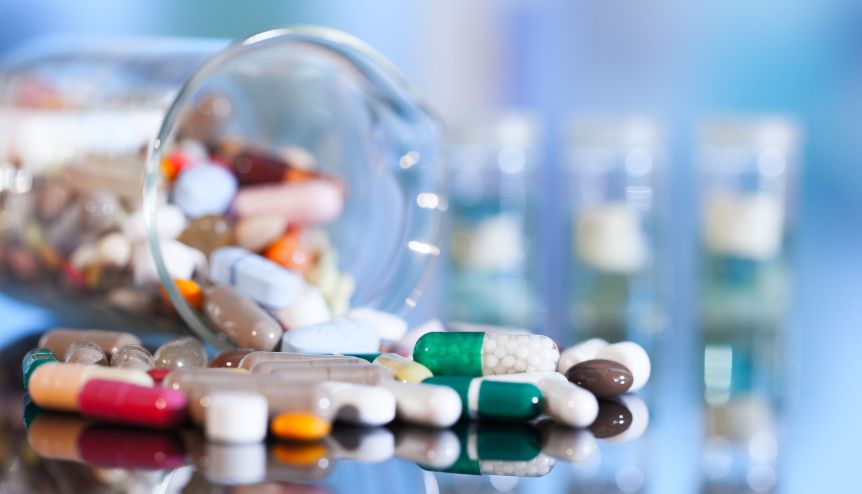 The Indian healthcare sector is riding the growth curve and emerging as a lucrative site for foreign investments, writes a healthcare analyst.

The Indian healthcare sector is one of the fastest growing sectors with high contribution not only in terms of revenue, but also employment. The Indian healthcare market is expected to rank amongst the top-three healthcare markets in terms of incremental growth by 2020.[1] The sector stood at approximately $113.9 billion in 2016 and is likely to grow at a compound annual growth rate (CAGR) of 11.6 per cent in the next five years to reach $195.6 billion.[2] This growth is driven by the rising income levels, ageing population, increasing healthcare awareness, growing health insurance penetration, increasing government’s focus on providing universal healthcare and the growing burden of the non-communicable diseases (NCDs). Along with these drivers, India’s unique value proposition in the form of low costs, availability of advanced technologies and skilled workforce are further driving the medical value travel in the country.

These factors combined with recent government conducive policies are responsible for alluring domestic as well as foreign investments from the private equity (PE), venture firms and healthcare players. In the last five years, the sector has attracted approximately $63.9 billion from VC and PE firms.[3] Further, foreign direct investment (FDI) in the sector witnessed an overall investments of $4.75 billion during 2012–16.[4]

India is gradually becoming a favourable investment destination owing to the high economic growth, low cost labour and the availability of opportunities in several untapped sectors. Additionally, the recent government initiatives to promote the ease of doing business, such as the relaxation of FDI norms, strengthening of research and development (R&D) in the sector and strengthening of intellectual property rights (IPR) regime, along with policies promoting the start-up culture, have fuelled investments.

The overall FDI in India has increased to reach approximately $46.40 billion in 2016, an increase of 17.9 per cent y-o-y, which can be attributed to the relaxation of FDI norms, as for most of the sectors under the automatic route, 100 per cent FDI is permitted.4 In 2016, under the healthcare sector, a majority of FDI came for the ‘Drug and Pharmaceuticals’ category ($1.08           billion), while in the ‘Hospital and Diagnostic’ segment, the investments were found to be flat in 2016 compared with that of the previous year.

The dominance of pharma in FDI can be attributed to the interest of foreign investors in the established pharma companies, which are expected to perform in the growing Indian pharma market estimated at $39.5 billion in 2015–16 (including exports) and set to grow at a CAGR of 12 per cent over the next three years.

The total PE investments in India has also reached the mark of $15 billion in 2016, with approximately 1,430 deals.6 The overall investments were significantly contributed by the IT; banking, financial services and insurance (BFSI); consumer discretionary; and, the healthcare and life sciences sector, in the specified order.

The healthcare and life sciences sector in India has been particularly witnessing substantial investments from PE firms, venture capital firms and angel investors. In 2016, the sector experienced an investment of about $1.1 billion, with nearly 88 deals.7 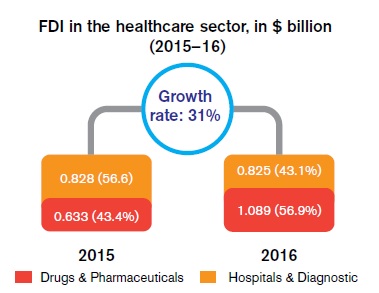 With an aim to promote the investments in the sector, the government has taken certain steps to attract investors, such as:

Even though the Indian healthcare system is witnessing significant growth in terms of investments, there is a need to further strengthen the ecosystem by mitigating certain challenges such as absence of unified regulatory framework, low tax incentives, thin spread of healthcare insurance, yet to be implemented medical device regulations and lack of cluster-based developments for active pharmaceutical ingredients (APIs). Some of the Asian countries such as China, Singapore and Malaysia have taken steps to attract healthcare investments. A few lessons that can be taken from these countries:

Along with the relaxations in regulations for investments provided by the government, there are several other factors, such as establishment of healthcare institutes for better human resource development, infrastructure development (building more hospitals, pharma and biotech research parks) and willingness of patients to pay for healthcare services in tier-I cities, would make the marketplace viable for foreign investments.

Nilaya Varma is Partner and Head of Healthcare at KPMG in India.

About the Author: Nilaya Varma