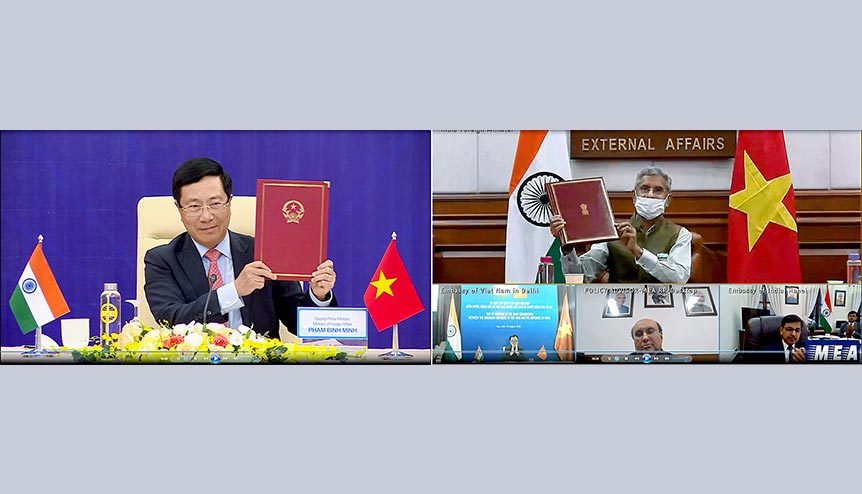 The 17th Meeting of the India-Vietnam Joint Commission on Trade, Economic, Scientific and Technological Cooperation saw several new spheres of collaboration being explored and earmarked for development.

Ramping up their already strong bilateral ties to higher levels of constant collaboration India and Vietnam have shortlisted cooperation in the emerging areas of civil nuclear energy, space, marine sciences and new technologies.

In a way this new vertical in their alliance will also impact on the Indo-Pacific partnership which could emerge as a crucial component in the overall stability of the south east Asian region.

The takeaways between the two allies were made during the 17th Meeting of the India-Vietnam Joint Commission on Trade, Economic, Scientific and Technological Cooperation. The proceedings were given due importance with the presence of Indian minister of external affairs Dr. S. Jaishankar and Pham Binh Minh, deputy prime minister and foreign minister of Vietnam.

India and Vietnam: Pushing back the dragon

Keeping a check on China 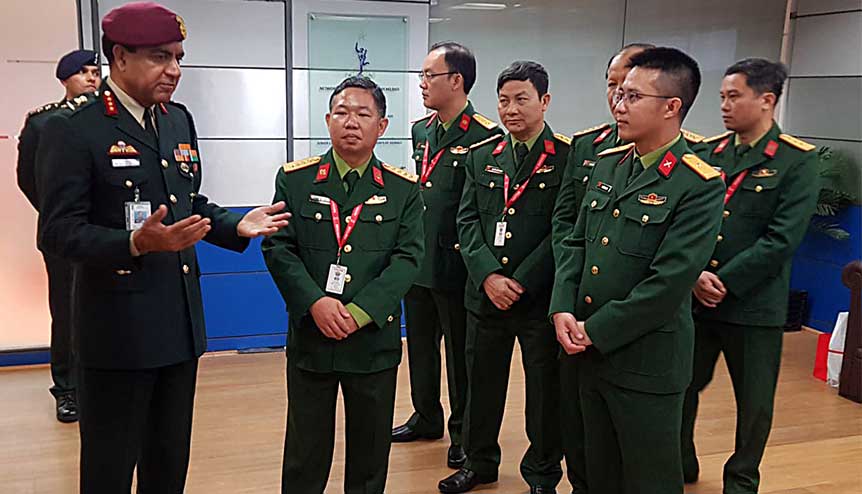 Lt General Rajeev Sabherwal with a delegation of Vietnamese army officers. Common interests between the two countries extends to military and security issues with an emphasis on curbing China’s ambitions in south east Asia and the Indo-Pacific.

Bilateral cooperation between the two countries has become the watchword and it is along the perimeters of India’s Indo-Pacific Oceans Initiative (IPOI) and the ASEAN’s Outlook on Indo-Pacific which focuses on shared security, prosperity and growth for all in the region. These issues become significant in the light of the recent aggressions by China in the Indo-Pacific region including the South China Sea region.

Both ministers reviewed the developments in the region and these were recorded in the India-Vietnam Comprehensive Strategic Partnership. The future arc of their engagements was also deliberated upon and it was agreed that more emphasis would be put on economic and defence engagements as well as collaboration in emerging areas such as civil nuclear energy, space, marine sciences and new technologies. 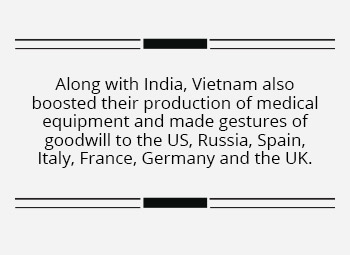 Recognising Vietnam’s global status as a manufacturing hub Jaishankar invited them to take advantage of India’s new economic capacities and demands. Even while countries are in the race to reduce their dependence on China in a post COVID world, India and Vietnam have emerged as strong contenders. Vietnam, in particular, have done their due diligence by wooing foreign companies and gifting manufacturers with access to the ASEAN free trade area and preferential trade pacts with countries through Asia, EU and the US. Along with India, Vietnam also boosted their production of medical equipment and made gestures of goodwill to the US, Russia, Spain, Italy, France, Germany and the UK. 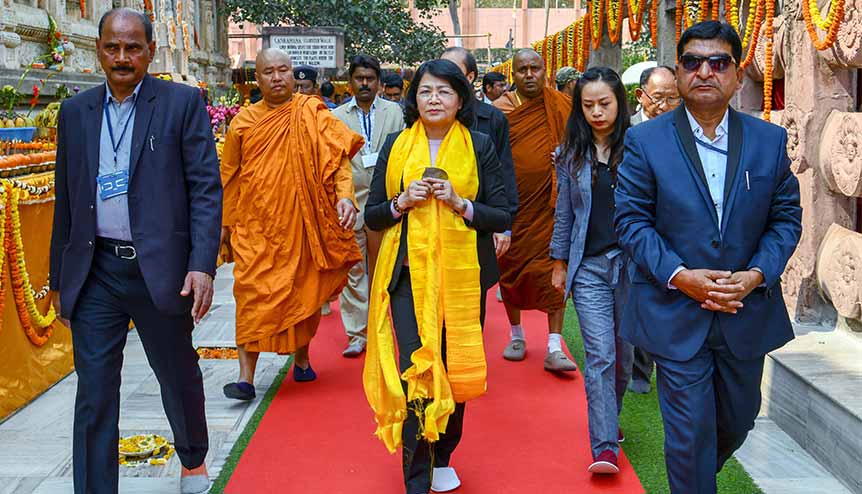 The Indian embassy in Vietnam has it on recorded fact that India was the Chairman of the International Commission for Supervision and Control (ICSC), which was formed pursuant to the Geneva Accord of 1954 to facilitate the peace process in Vietnam.

Consular level relations were maintained with the North and South Vietnams and this was later upgraded to full diplomatic interactions with a unified Vietnam on January 7, 1972. The ties between the two countries have not remained dormant, graduating to the level of ‘Strategic Partnership’ during Vietnam’s prime minister Nguyen Tan Dung visit to India in July 2007 and thereafter to a “Comprehensive Strategic Partnership” during the 2016 visit by Indian prime minister Narendra Modi. 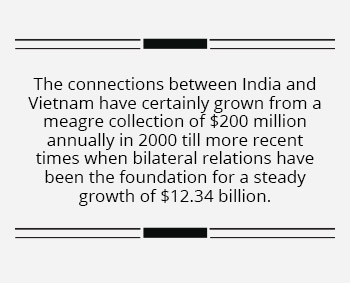 Today both countries serve concurrently as non-permanent members of the United States Security Council till 2021.

Relationship grows along with trade

The connections between India and Vietnam have certainly grown from a meagre collection of $200 million annually in 2000 till more recent times when bilateral relations have been the foundation for a steady growth of $12.34 billion (2019-2020). Vietnam is India’s 18th largest trade partner globally and within ASEAN, the fourth largest after Singapore, Indonesia and Malaysia. Conversely for Vietnam is the seventh largest trading partner, seventh largest source of import and ninth largest export market in the world. 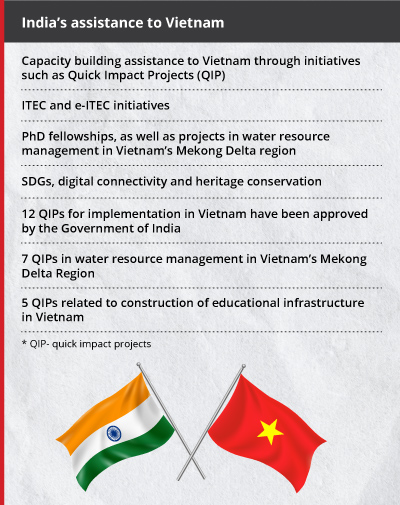 Vietnam has six investment projects in India, till 2019, with total estimated investment of US$ 28.55 million, primarily in the areas of pharmaceuticals, information technology, chemicals and building materials. 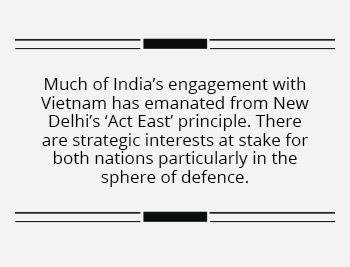 Much of India’s engagement with Vietnam has emanated from New Delhi’s ‘Act East’ principle. There are strategic interests at stake for both nations particularly in the sphere of defence. This has been illustrated in the form of a Defence Protocol signed in 2000 which ensures engagement on joint military exercises, joint campaigns on anti-piracy in the South China Sea and anti-insurgency training. 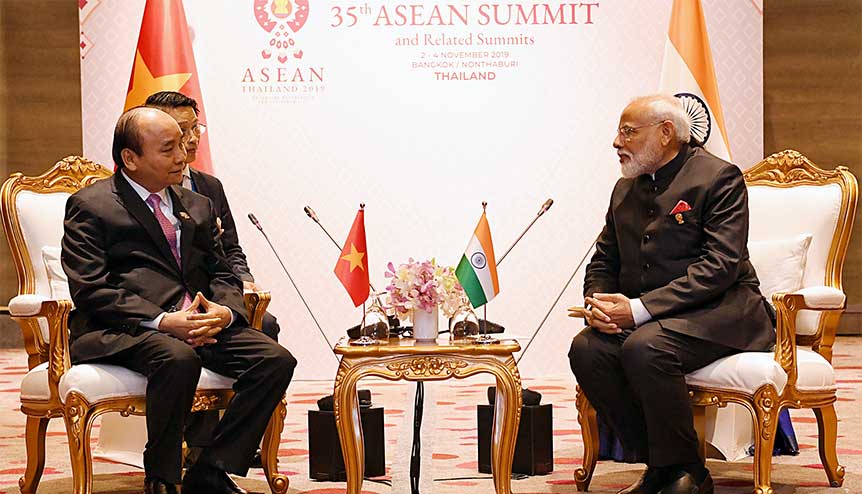 In 2003 this arrangement was bumped up to include high-ranking visits including the expansion of cooperation in defence and security domains. The signing of the MoU on Defence Cooperation by the two Defence Ministers in November 2009 has brought about vigorous interaction through regular defence dialogue, training, exercises, navy and coast guard ship visits, along with the capacity building.

With Modi’s visit in 2016, the two states drew up a broad outline for a Comprehensive Strategic Partnership [CSP]. This only serves to highlight the unbreakable bonds between these two countries given that defence is a critical area where these two countries must ensure complete convergence on diverse issues.