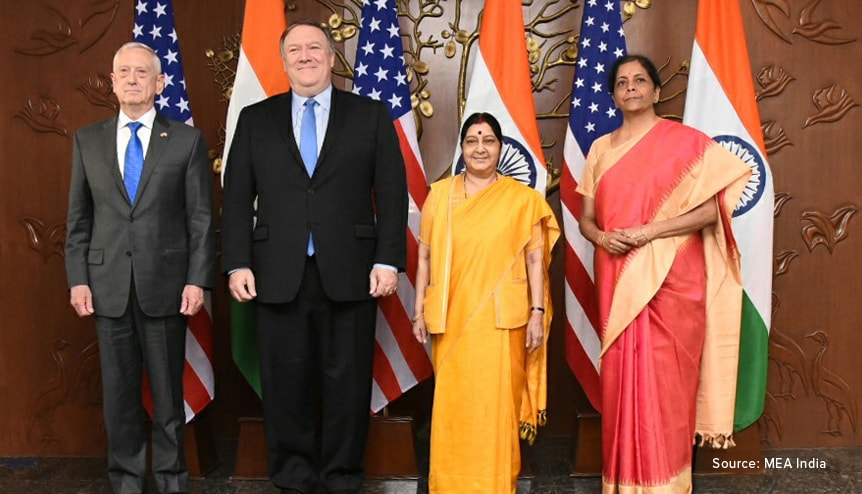 The first 2+2 Strategic Dialogue held in Delhi between the foreign and defence ministers of India and the US this week should pave the way for wider negotiations on trade and commerce, writes India Inc. Founder & CEO Manoj Ladwa.

The much-delayed 2+2 dialogue between the external affairs and defence ministers of India and the US Secretary of State and US Secretary of Defence in Delhi has reasserted what many were beginning to doubt – that the India-US relationship was getting progressively closer.

But it was equally important for many of the issues that remain beyond the pale of the talks. And here, I am talking about the economy.

It was also notable for the invisible presence of the Dragon in the room. Yes, though neither side mentioned it, most analysts agree that the looming presence of China across the strategic landscapes of India and the US guided at least some of the discussions between the leaders.

In my opinion, the two outcomes that stand out from this first meeting between Indian External Affairs Minister Sushma Swraj and Defence Minister Nirmala Sitharaman with their US counterparts – Michael Pompeo and James Mattis – under the 2+2 protocol is the direct mention of Pakistan – the two sides minced no words in calling for India’s troubled north-western neighbour to stop harbouring terrorists and to disallow such organisations and individuals to use “territory under its control” – a huge concession to India’s stance on Pakistan-occupued Kashmir (PoK) being illegally occupied by Pakistan – as a launch pad for terror operations against neighbours.

The other, even more important, outcome of this meeting was the signing of the Communications Compatibility and Security Agreement (COMCASA) that had been hanging fire for years.

This is particularly important for India as it gives New Delhi real time access to the US’ vast and global intelligence network. Additionally, it also provides India access to the intelligence gathered by US allies subject to India’s bilateral arrangement with that country permitting this.

Sweetener for the US

Expectedly, in the run-up to this meeting, some analysts and Opposition politicians who are still caught in a Cold War time-warp, have called this a sell-out that will embed India into the US-led security system as a junior partner and eliminate Russia as a weapons supplier. In particular, they allege that this is a plot to prevent India from buying the S-400 missile defence system that the two countries are close to finalising.

Nothing can be further from the truth. If anything, the signing of the COMCASA should be seen as a sweetener for the US to provide an exception to India from the highly intrusive Countering America’s Adversaries Through Sanctions Act that the Donald Trump administration has recently enacted as part of its plans to tighten the screws of Russia and wean other nations away from it.

Though the joint statement is silent on it, I will be very surprised if the waiver under CAATSA doesn’t come sooner than later.

The other big issue on the foreign policy front, the core of the discussions apart from defence, was Iran. Again, there is no official word on whether the US will give India a waiver on its oil trade with that country and whether it will allow Indian companies involved in the construction and operation of the Chabahar port, which India is building as a bridge to Central Asia and beyond, a waiver from sanctions it has imposed following its unilateral pullout from the N-deal it had signed.

But analysts and observers say the Indian side explained India’s challenges in reducing crude imports from Iran. For one, Iranian crude is cheaper than that available from other sources. Then, most Indian refineries are geared to refine that variety of crude that Iran produces.

On Chabahar, media reports say India impressed upon the two US secretaries the importance of opening a route to Central Asia that bypasses Pakistan. New Delhi is also believed to have told the visiting delegation that any roadblocks to the construction and operation of the Chabahar port would only cede critical strategic space to China.

Chances are that this waiver may also come through.

From these aspects, I must say that the apprehensions in some quarters that the repeated postponement of this dialogue in previous months indicated a downgrading of India’s importance in Trump’s worldview have been found to be misplaced.

It also reiterated the two countries stated position on ensuring a free and peaceful Indo-Pacific.

So, from a defence, foreign policy and strategic perspective, the talks were an unqualified success.

But, as I have written at the beginning of this piece, the dialogue omitted what is arguably the glue – apart from strategic convergence and people-to-people contacts – that binds the two countries together: commerce.

Speaking at an event organised by the Indo-US Business Council in Mumbai, India’s Commerce & Industry Minister, Suresh Prabhu, said the two countries should not be happy with the bilateral trade volume of $125 billion.

Prabhu said it is time for India and US to set a target of $500 billion within a stipulated time. “We have an excellent relationship, a vibrant relationship with US. But we can’t hide the fact that there are issues in the US-India relationship. The challenge is how we resolve our differences. I am confident we will.”

One of the key issues is on data. The recent Reserve Bank of India circular on forcing payments companies to store customer data in India has led to Apple putting on hold its plans to roll out its unified payments system in India. Apple has followed in the footsteps of Amazon and WhatsApp that have had to stall their plans for a full rollout of this service.

I know the RBI is an autonomous institution but India will have to be careful here, even walk on eggshells while implementing the central bank circular as it is a major outsourcing destination and if this issue becomes overly politicised between the two governments India could be a net loser.

Norms of course need to be established but on the issue of data we could end up with a very fragmented situation, which will negate the benefits of the internet and make their Indian operations very unwieldy for global companies.

The problem with the Trump administration does not like the multilateral approach to resolving issues. In fact, it has within a short span of less than two years unilaterally torn up more multilateral trade and strategic agreements than any previous administration. This makes it more problematic to deal with the US, especially on a global issue such as data.

May be it’s time to consider another 2+2 dialogue involving the finance and commerce ministers of the two countries to iron out the glitches and set the course for the target set by Prabhu.

Trump is very transactional, so the idea of making bilateral deals with India may appeal to him.

Another 2+2 dialogue could well be worth the effort. 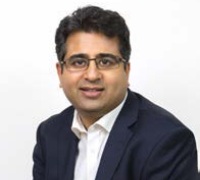