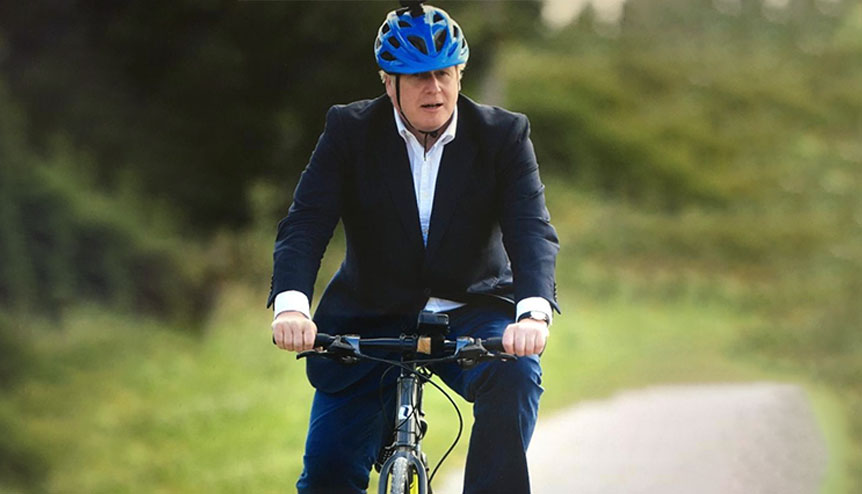 From UK PM Boris Johnson choosing a made-in-India bicycle to launch his multimillion-pound new health campaign to combat coronavirus to a new £8mn medicinal research collaboration, the broad spectrum of bilateral ties was once again in the limelight.

The 14th India-UK Joint Economic and Trade Committee (JETCO), held in a virtual setting recently, laid out some big ambitions for bilateral ties with a commitment to agreeing on an “Enhanced Trade Partnership” as part of a roadmap that could lead to a future free trade agreement (FTA). During the ministerial dialogue, it was agreed that the process of engagement will continue at a more regular and faster pace.

And, as some recent developments indicate, that pace seems to be very much on track, not least when UK Prime Minister Boris Johnson chose a designed in the UK and made in India bicycle to launch the UK’s new anti-obesity drive to combat the impact of coronavirus.

The Viking Pro bike used by him is part of India’s Hero Motors Company owned Insync brand, designed in Manchester and made in India by parent company Hero Cycles, which took over the brands Viking, Riddick and Ryedale and redesigned the range under the brand name Insync. The Insync range now consists of 75 bikes and is the first to be designed at Hero Cycles Global Design Centre (HGD) in Manchester.

And the symbolism of Johnson’s choice did not go unnoticed, as Indian Commerce & Industry and Railways Minister reflected on Twitter: “Delighted to note that a Made-in-India cycle helped kickstart a healthy UK campaign and was used by PM Boris Johnson. Indian products are without doubt the best recipe for nursing back the health of the World.”

Johnson, a keen cyclist who went on a weight loss regime following his Covid-19 hospitalisation earlier this year, was seen riding his Hero Viking Pro to Canalside Heritage Centre at Beeston in Nottingham, central England as he unveiled plans for thousands of miles of new protected bike lanes and bikes available on prescription as part of a new fitness strategy.

Pankaj M. Munjal, chairman and managing director of Hero Motors Company, which includes Hero Cycles, Insync, the Viking and Lectro brands, said: “We strongly back all the measures announced in the strategy, a move we hope will see many more thousands of people taking to the roads on two wheels. Providing safer cycle routes, funding towards e-bikes and a bike repairs scheme will encourage even more riders to return to cycling or take it up for the first time, building on the stand-out success the industry has seen during the pandemic.”

World leaders promote cycling as a daily chore. I have started to follow their advise so seriously that i test random samples in the plants myself. Hero aspires to build world class quality, of course no more imports over defined time period. Aatam Nirbhar ⁦@PMOIndia⁩ pic.twitter.com/pKCGIZdLmu

The pandemic has also enhanced India-UK cooperation across other areas, most recently with five new projects to tackle anti-microbial resistance (AMR), which could lead to important advances in the global fight against antibiotic-resistant bacteria and genes. The UK will contribute £4 million from the UK Research and Innovation (UKRI) Fund for International Collaboration, which India will match with its own resources – resulting in a total funding of £8 million towards these new set of projects.

Lord Tariq Ahmad, UK Minister of State for South Asia and the Commonwealth, unveiled the new partnership during a “virtual visit” to India last week.

He said: “The UK has already partnered with India’s Serum Institute to manufacture the vaccine for Covid-19, if clinical trials are successful, with plans to distribute to a billion people across the developing world.

“But there is more we can do together to tackle urgent global health issues in the world. Our thriving research and innovation partnerships will benefit people in the UK and India, and beyond.”

India is a major producer of antimicrobials in the pharmaceutical industry global supply chain, and the new research projects aim to develop a better understanding of how waste from antimicrobial manufacturing could be inadvertently fuelling AMR. The five projects backed by the new funding are planned for September, subject to clearances.

Sir Philip Barton, UK High Commissioner to India, said: “The UK is India’s second biggest research partner, with joint research expected to be worth GBP 400 million by next year. This huge investment enables us to work closely together on global health challenges such as the search for a Covid-19 vaccine.

“This announcement is another demonstration of our excellent research relationship and will strengthen the important fight against anti-microbial resistance.”