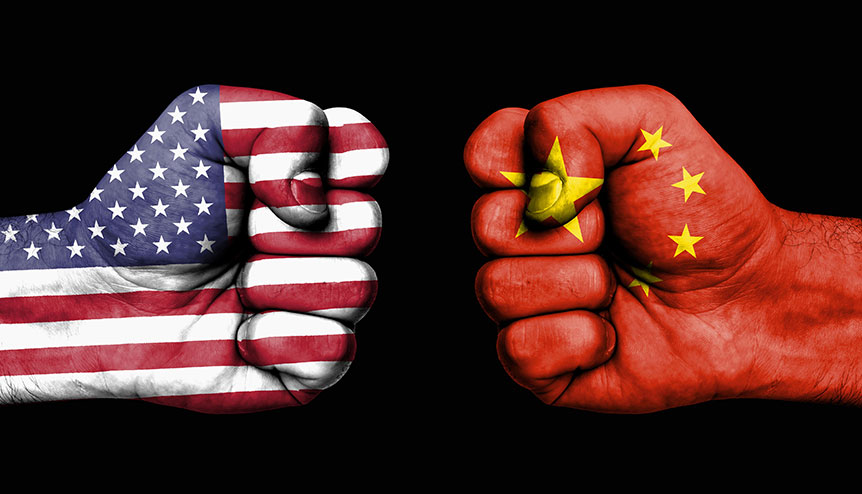 The recent back and forth of tariff hikes between the US and China are causing quite a stir in the global economy. However, in the long run, this tussle could result in several advantageous opportunities for India.

When the world’s two largest economies—US and China—that between them account for roughly 40 per cent of world’s overall economic output, go for a full-blown trade war with each other, the impact is felt in every nook and corner of this planet. At a time when the global economy itself is fragile, a fight between the two is the last thing that is needed.

Yet, that is the harsh reality. Ever since Donald Trump spooked global markets and romped home to become the President of the US in late 2016—he was sworn in in early 2017—the writing was on the wall. Trump, a highly divisive individual at all times, has been an opponent of free trade deals all his life and abhors the concept of globalisation like few others. Re-scripting the North American Free Trade Agreement and fixing China, a country which enjoys a significant trade surplus with the US, were cornerstones of his economic policy during the Presidential campaign trail.

After moving into the White House, Trump has shown he means business. Soon after taking over, he started negotiations on a new NAFTA deal with Canada and Mexico and after 12 months a new agreement was arrived at in September last year. With China, it started off initially on an optimistic note. Trump met Chinese premier Xi Jinping in April 2017 where the latter agreed to a 100-day plan for talks to increase US exports to China and reduce the trade deficit.

The thaw in the relations happened bang after the expiry of the 100-day period. In August, Trump asked his US Trade Representative to begin an investigation for possible tariff hikes on Chinese goods. It promptly started in January 2018, when Trump imposed a 30 per cent tariff on foreign solar panels and 20 per cent tariff on the first 1.2 million washing machines imported during the year. Both the moves primarily hurt Chinese interests.

On March 1, 2018, he imposed a tariff of 25 per cent of steel and 10 per cent on aluminium. This time, the impact was less on China and more on other countries including some allies like Canada and South Korea. His tweet the next day however made it clear, there were more tariff interventions in the offing.

“When a country (USA) is losing many billions of dollars on trade with virtually every country it does business with, trade wars are good, and easy to win. Example, when we are down $100 billion with a certain country and they get cute, don’t trade anymore-we win big. It’s easy!” he tweeted on 2 March 2018.

The US has a $100-billion trade deficit with its NAFTA partners, Mexico and Canada, but it pales in comparison to China. The US and China engage with each other economically like no two other countries in the world, but trade is heavily skewed in favour of the dragon. In 2018, the US had a trade deficit of $419.2 billion with China—it exported goods worth just $120 billion to China but imported merchandise worth $539.5 billion from the Asian giant. Barring 2016, the trade deficit between the two countries has only gone up in each of the last 10 years.

As with NAFTA, Trump wants to reset his ties with China so that the imbalance can be corrected. The two countries, however, are so comprehensively intertwined that any course correction will lead to pain on both sides. And also, to the world economy at large.

What followed was a series of tariff hikes from both sides—the quantum increasing in each round as the battle for one-upmanship intensified. In March 2018, the US again raised tariffs on Chinese goods worth $50-60 billion across 130 categories including aircraft parts, flat panel televisions, batteries and medical devices. China responded by raising tariffs on 128 products that it imports from the US. The two sides met over the next fortnight to diffuse the situation and China again offered to reduce its trade surplus and buy more goods from the US. There would be no breakthrough though. In July and August, the US imposed a 25 per cent tariff on goods worth $50 billion from China, something it had warned it would do in May itself. China retaliated with a similar tariff hike on the same quantum of US goods almost immediately. 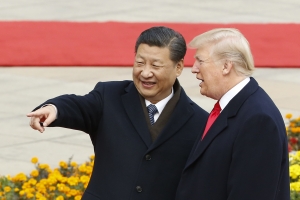 Those attempts seemed to have failed. On 5 May, the US went ahead with the planned hike in tariff from 10 per cent to 25 per cent that had been deferred in December. Trump also detailed plans to impose a 25 per cent tariff on virtually everything that China exports to the US if China did not back down and continued to retaliate. For now, it is in no mood to give in. Like in the past, China has also vowed to impose higher levies on $60 billion worth of US goods. It just could be the start of a full-blown trade war.

“I say openly to President Xi & all of my many friends in China that China will be hurt very badly if you don’t make a deal because companies will be forced to leave China for other countries. Too expensive to buy in China. You had a great deal, almost completed, & you backed out,” said Trump recently while imposing fresh tariffs on China. “There will be nobody left in China to do business with. Very bad for China, very good for USA! But China has taken so advantage of the US for so many years, that they are way ahead. Therefore, China should not retaliate-will only get worse!”

Should the two nations carry out their respective threats, Chinese and the US economic output would be reduced by 0.8 per cent and 0.3 per cent respectively and global trade would decline by 2 per cent. The impact will not be homogenous, and some nations will suffer more than others. Countries like Malaysia, Japan, Singapore and Mexico that are more dependent on trade would suffer more. There will be an impact on India as well but there are some positive spin-offs too.

The US is the world’s biggest steel importing country and every year more than 25 million tonnes of the commodity reaches US shores from various parts of the world. India does not export much steel to the US—0.7 million tonnes in 2017—and hence is not majorly impacted directly but increased tariff will impact at least 50 per cent of the 25 million tonnes that US imports which will become surplus capacity globally.

As the largest producer and exporter of steel in the world, China would be straddled with excess capacity that would need a new market. India’s has been a bright spot in the global steel industry for long—growing steadily year on year without a break, and the potential for future growth is also very high. It becomes an automatic choice.

“The countries which are currently exporting to the US (primarily from Europe and East Asia) will be forced to look at other major steel consuming markets like Africa, Middle East, India etc. to sell their surplus, even at lower prices, to recover marginal cost. If global steel prices decline, it will affect prices in India as well,” says Niladri Bhattacharjee, Partner, Strategy & Operations, Mining & Metals, KPMG in India. “India does have protection in the form of Anti-Dumping Duties, CVD, SD, Quality Control Orders, etc. but that is not as good a shield as the beneficial impact of rising steel prices worldwide. Price reversal is bound to affect realisations. As per HSBC Global Research report, a 1 per cent drop in steel prices could lead to 2-10 per cent contraction in steelmakers’ EBITDA estimates. This will hamper the recovery cycle of the steel industry in the country.”

“The bigger risk is industry-wide effects if other countries retaliate with their own tariffs, which then affects exports or results in a decline in prices. Any significant downturn in steel demand or prices is a risk to be watched for,” he adds. “Trump’s tariffs are here to stay and how other countries react to these tariffs will be a factor that will determine how prices behave.”

Any shrinkage in global trade volume on account of this trade war will, at least in the short term, have an adverse impact on India’s already fragile exports. India exported goods worth $331 billion in fiscal 2019 but higher imports of $507.4 billion increased the deficit for the year. Further, there is a threat that the US may impose some sanctions on India too considering it has a trade deficit with India as well. India enjoys a trade surplus of $24.1 billion with the US.

There is a significant upside to this for India. As per a UNCTAD report, India is likely to increase its exports by as much as $11 billion in the long term due to the fall out between the US and China. The increase would come in items that are currently being imported from China where US companies do not have the competitive edge to match India. Similarly, Indian exports would also gain in China for the goods that it today imports from the US. 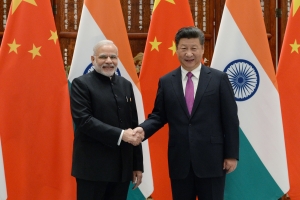 The report says chemicals and plastics will be the top sector benefiting from Chinese tariffs on the US, gaining about $1 billion, while on the US side it will be communications and office equipment with a gain for India of $2.44 billion. India’s exports of machinery are expected to go up by $2.4 billion because of US tariffs, and only $714 million because of China’s tariffs. Motor vehicles and transport equipment may benefit $442 billion from US tariffs and only $22 million from China’s. In various other areas, India’s exports are likely to go up by $1.9 billion from US tariffs and $222 million because of China’s.

Further, there could be increased investment and capital flow between India and the US and India and China as China and the US seek to disentangle themselves. Some of it is already visible. Chinese companies have in recent times made a beeline to invest in India especially in the area of telecommunications. India is one of the biggest markets for Chinese mobile brands like Xiaomi, Vivo, Oppo, Lenovo and Oneplus.

A case in point is Huawei, the Chinese firm that is the world’s largest telecommunication equipment supplier, which finds itself right in the middle of the trade war. Trump, on 16 May, signed an executive order banning American telecom companies from installing foreign-made equipment, a thinly veiled attack at Huawei. With the doors closing in the US, the Chinese firm may now look at India more earnestly. Already, it has plans to invest $100 million in India over three years starting 2020 that includes expanding its local production.

“It is getting difficult for Chinese companies to invest in US. We are most active in investing in India, and it will be good for this country,” says Lei Jun, Founder, Xiaomi. “Yes, investments will grow in India due to what is happening between US and China.”

Even if the US and China do strike a deal eventually and a full blown trade war is averted, Mahindra group chairman Anand Mahindra feels India would still be a beneficiary.

“Even if they settle, a Chinese firm with large exports to the US would be wise to hedge & invest in a subsidiary in India & transfer its scale-manufacturing skills,” he tweeted on 15 May. “Direct exports would simply become indirect. A wave of Chinese investment in India may be imminent.”

In a battle between two behemoths, India is in the best position to lap up the spoils.