India sends out a loud message: Follow the law 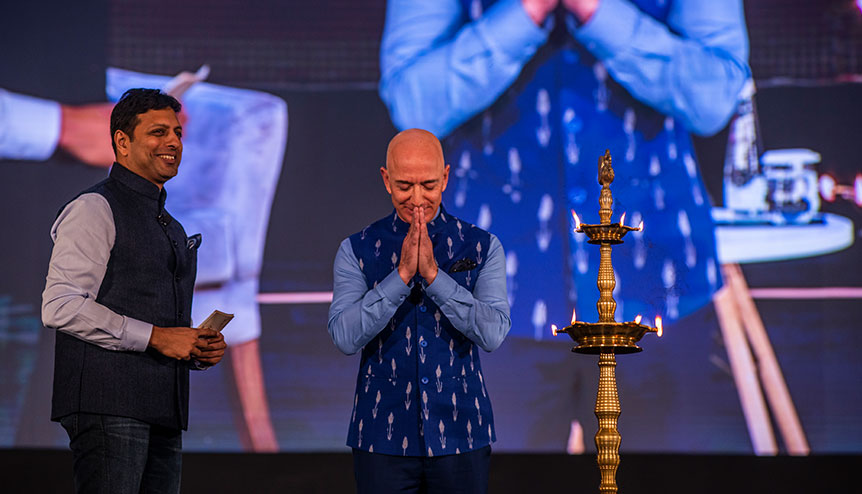 Indian Commerce Minister Piyush Goyal’s rebuke of Amazon chief Jeff Bezos, during his recent visit to India, needs to be seen in the context of the e-commerce giant’s alleged predatory and anti-competitive practices that threaten the livelihoods of millions in India’s largely unorganised retail sector.

In an unusual development earlier this month, India’s Commerce Minister Piyush Goyal had harsh words for Amazon CEO Jeff Bezos and his company.

Responding to Bezos’ offer to invest $1 billion in India (over and above the $5 billion he has already poured into India), Goyal said: “They [Amazon] may have put in a billion dollars but if they make a loss of a billion dollars every year, then they jolly well will have to finance that billion dollars. So, it is not as if they are doing a favour to India when they invest a billion dollars.”

He wondered how a company that operated an e-commerce marketplace model, where it only provided an IT platform for buyers and sellers, could incur such huge losses. “They are investing money over the last few years also in warehousing and certain other activities, which is welcome and good. But if they are bringing in money largely to finance losses and those losses (arise) in an e-commerce marketplace model…” He added, “[It] certainly raises questions, where the losses came from”.

Notably, neither Prime Minister Narendra Modi nor any senior minister in his council of ministers met Bezos during his recent visit.

If it was unprecedented for India’s trade minister to publicly tell off a large foreign investor who was offering to invest a billion dollars in the country, it wasn’t the only issue that made Bezos feel unwelcome in India.

His visit was marked by largescale protests by owners of small brick and mortar retail businesses who greeted him with placards saying, “JEFF BEZOS GO BACK!” The Confederation of All India Traders, a retail industry lobby group representing 70 million small retailers, carried out peaceful protests in about 300 cities and town across India.

Their grouse: Amazon’s alleged predatory pricing and other discriminatory business practices were unfairly driving them out of business.

The rebuff from the government and the traders’ protests come at a time when India’s anti-trust regulator, the Competition Commission of India (CCI), has decided to investigate Amazon (and Walmart-owned e-tailer Flipkart) for anti-competitive trade practices such as discounts to preferred sellers.

These practices, the regulator said, “lead to a foreclosure of non-preferred sellers from the online marketplace”. It added that the “preferred sellers are also alleged to be affiliated with… directly or indirectly with Amazon”, which leveraged its dominant position in the market to sell products below cost, leading to the creation of “high entry barriers and high entry costs for any new entrant to the market”.

Amazon has faced similar charges in the past as well, most notably in Europe. In 2018, the German anti-trust regulator said Amazon’s market dominance gave it the de facto power of a “gatekeeper” that has “the potential to hinder other sellers on the platform”.

Government’s message: Play by the rules

The Indian government is sending out a loud message not only to Amazon and Bezos but all foreign investors: Rules are sacrosanct and foreign investors who disrupt India’s business climate with alleged unfair trading practices should not expect any quarter.

Reiterating that e-commerce companies have to follow Indian rules in letter and spirit and not find loopholes to make a back-door entry into the multi-brand retail segment, the minister clarified: “My statement should be seen in context. Investments are welcome but they should be within the law.”

Under Indian law, foreign companies are not allowed in the multi-brand retail sector. Thus, e-commerce giants such as Amazon India and Flipkart (owned by Walmart) are barred from selling their own inventory. That is why these companies operate marketplaces in which they sell only third-party goods, a la E-Bay.

But small retailers allege that Amazon India (and Walmart) have entered the multi-brand retail segment through the backdoor as they own significant direct and indirect stakes in many of the sellers on their sites.

Then, rivals allege, Amazon India ties in third party sellers with agreements – on warehousing, deliveries, pricing and discounts – that leave them little or no room to compete except on Amazon’s terms.

India’s retail industry is expected to end the current year with sales of $1.1 trillion, according to India Brand Equity Foundation (IBEF), a trust established by the Ministry of Commerce and Industry, Government of India, to disseminate accurate information on the Indian economy, industry and business opportunities. Of this, the e-commerce sector is expected to clock revenues of only $60 billion.

As the above figures show, the Indian retail sector is dominated by millions of small mom-and-pop stores mainly in the unorganised sector that provide last-mile connectivity between domestic and foreign manufacturers and end-users. It also provides jobs and livelihoods to millions of people.

Thus, it is important for the government to ensure that deep-pocketed multinationals play by the rules and refrain from predatory practices, which can put the livelihoods of so many millions at stake.

A section of commentators has clutched on to Goyal’s statements and Prime Minister Narendra Modi not meeting Bezos during his recent visit as signs that India is turning inwards once again. Such a conclusion is not based on facts.

Since coming to power in 2014, the Narendra Modi government has walked the extra mile to attract foreign investments. It has, during this time, brought about a paradigm shift in the business environment in the country – where the law of the land is applied equally to everyone. New laws such as the Insolvency and Bankruptcy Code have broken the power of the old crony capitalist networks. This and various other measures taken by the government are showing up in the massive improvement in India’s ranking on the World Bank’s Ease of Doing Business Index. At the root of all these reforms is the primacy of the law of the land.

Goyal’s comments on Amazon, therefore, must be seen in that context.