India’s emergence as the world’s second-largest manufacturer of mobile phones is at once a milestone and yet another record to cheer about by the Narendra Modi government amid the global gloom of the coronavirus pandemic.

Related stories: India is wooing investors with agility, incentives and political will

“From just two factories, we now have 200 [mobile phone] manufacturing units in India. The country has emerged as the second-largest manufacturer of mobile phones in the world and the production of mobile phones has gone up to approximately 33 crore units in 2019-20,” Indian Telecom Minister Ravi Shankar Prasad said earlier this week at the launch of the Electronics Manufacturing Schemes in New Delhi. 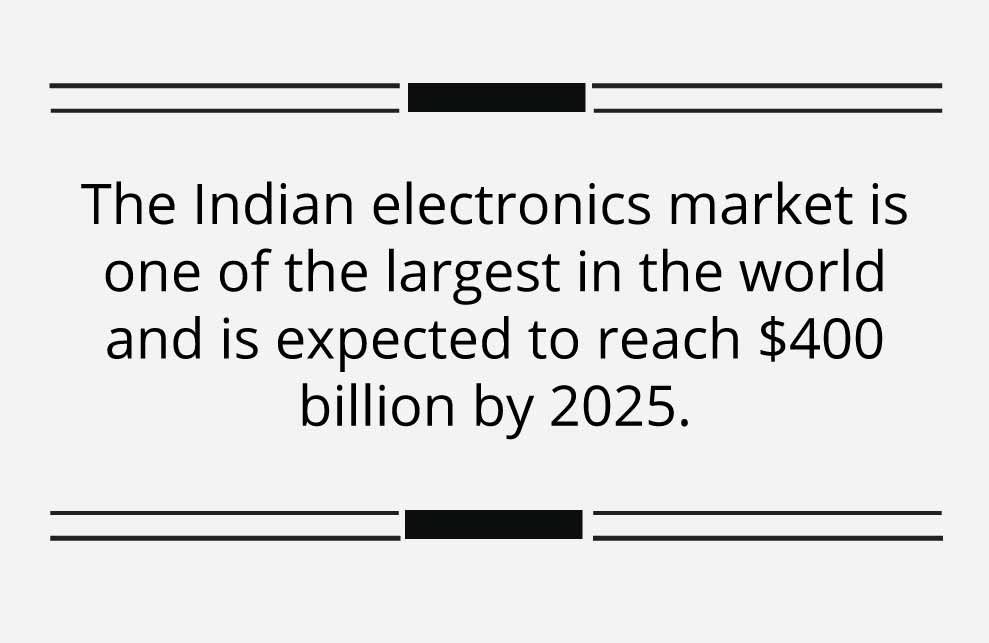 According to the minister, India’s electronic manufacturing was worth $25.14 billion in 2014, and today it’s worth $60.48 billion. “India’s global share in electronics has risen from 1.3 per cent in 2012 to 3 per cent in 2018. Electronic production has surpassed exports,” he said.

The seeds of this achievement were set in motion with the government’s Make in India initiative, but last year the sector got a further boost with the announcement of the National Policy on Electronics. The NPE (2019) replaces NPE (2012) and aims to position India as a global hub for Electronics Systems Design and Manufacturing (ESDM) by driving capabilities for developing core components such as chipsets.

With the focus of NPE 2019 being on the development of a component manufacturing eco-system, fiscal incentives for the ESDM sector, promoting research and development and key sub sectors such as fabless chip design, medical devices and automotive manufacturing under the aegis of the Ministry of Electronics, Information and Technology, the strategy has indeed paid handsome dividends, the confirmation of which came from the minister himself.

“The National Policy on Electronics 2019 aims to position India as a global hub for Electronics System Design and Manufacturing by encouraging the country to develop core components and enabling the industry to compete globally,” Prasad said. “There is a higher leverage given to hardware manufacturing in India in the past few years, which has emerged as an important pillar of the Make In India and Digital India initiatives,” he said, adding that the government had identified three schemes for the sector that would bring immediate cheer to the industry and its investors: production linked incentive, component manufacturing scheme and cluster scheme.

How does India’s status as the second largest manufacturer of mobile phones add to its lure as an electronics market? 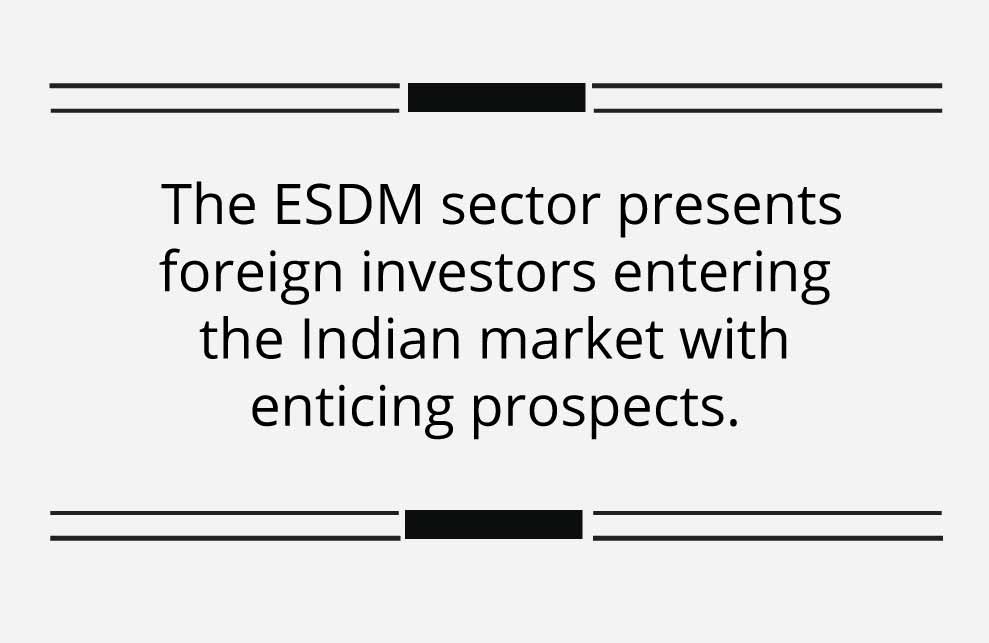 What are the key drivers of India’s ESDM sector?

The Indian ESDM sector is driven by such macro-economic factors as growing middle-class population and rising disposable income, along with declining electronics prices and adoption of high-end technology devices – which have led to an significant rise in consumption of electronic devices.

The introduction of technology transitions and disruptions such as the rollout of 5G networks and the IoT have only worked to stimulate accelerated adoption of electronics products.

Initiatives such as Digital India and Smart City projects have raised the demand for the IoT in the market – which in due course have had a domino effect on what an average Indian with a reasonably fast data connection can do with her or his mobile phone. The digital banking sector has evolved with e-wallets, while small aperture terminal (VSAT)-enabled mobile ATMs have raised the game for the telecom industry in general.

So how does this link back to self-reliant India?

The rapid changes in the telecom manufacturing industry has made it the backbone of India’s rise as a leading electronic manufacturing hub in the coming years. “Global and local companies will work together to help India grow to achieve this goal,” said Prasad.

“PM Narendra Modi has given a clarion call for Aatma Nirbhar Bharat (self-reliant India). In view of that, the government is working towards to build up a robust manufacturing ecosystem in India,” explained Prasad. But this India, he clarified, is not an India of isolation or an inward-looking India. “It is an India which develops an ecosystem as a robust asset to the global economy”.

The National Policy of Electronics 2012 built the initial enterprise for the sector – and NPE (2019) has added clear direction to that foundation to propel the growth of India’s ESDM industry, successfully consolidating the foundations for a competitive Indian value chain.

“The Indian ESDM industry companies need to take even greater advantage of emerging technological tools to accelerate experimentation, facilitate innovation, boost agility and power organisations’ journey in the era of digital disruption,” says PwC in a review of the NPE 2019.

What are the key challenges ahead for the ESDM sector?

New technologies are penetrating the market within a fraction of the time it took older technologies to do so, with disruptors capitalising on existing infrastructure and leaping ahead in the market share. Many electronics companies have already taken advantage of the rapid changes in the market and technology by enhancing their capabilities, building more sophisticated approaches to capital markets, developing deeper consumer insights and refining pricing strategies.

That last component is critical for the Indian market – since the electronics value chain remains under intense pricing pressure as customers push to lower end-market prices and manufacturers aim to increase market penetration even as material, labour and other operating costs continue to rise.

Apart from its ginormous scope of the industry, strong domestic consumer demand for mobile phones and other ESDM products continue to rise due to India’s rising disposable incomes and digitalisation.

While Covid-19 might bring a temporary drop in demand, the push for self-reliance and an increasingly deep apathy towards cheaper Chinese products will also spur the need for developing indigenous electronics production capacities in India.

With demand far outstripping supply, the government is intent on setting up more local manufacturing and assembling units through a combination of measures such as tax breaks, industry- incentives, further ease in FDI rules and raising import duties. The ESDM sector thus presents foreign investors entering the Indian market with enticing prospects, and the government has therefore prioritised the sector under its Make in India programme.