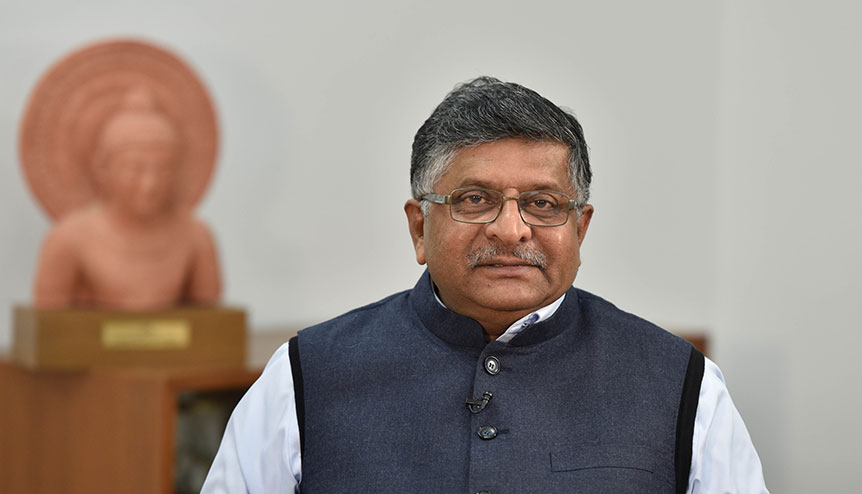 In this exclusive interview with ‘India Global Business’, Ravi Shankar Prasad, India’s Minister for Communications, Electronics & Information Technology and Law & Justice, discusses a wide array of topics, ranging from strides in the country’s electronics industry to the Digital India movement, as well as creating a vibrant ecosystem for start-ups and emerging technologies.

Congratulations on being recognised as one of the most influential leaders of the world in the field of digital governance. How do you see this recognition?

Thank you very much. I see this recognition as a global acknowledgement of the success of Digital India, which is a visionary initiative of Prime Minister Narendra Modi to transform India by using the power of digital technology. In the last five years, India has witnessed transformation in every aspect of life where digital technologies have led to inclusive growth and empowerment of citizens. Today, India is known in the world as a country with 1.16 billion phone users, 1.24 billion people with a biometric-based digital identity, Aadhaar, over 600 million internet users who are using the Internet at the lowest tariffs in the world and the second largest start-up ecosystem in the world. These and several other achievements of Digital India are now being acknowledged globally. I feel the acknowledgement by the Apolitical is actually a recognition for the visionary leadership of our Prime Minister and tech savvy citizens of India.

India has made significant strides in electronics manufacturing in the last five years. What is your message to global investors in the electronics industry?

Indeed, in the last five years, India has achieved tremendous growth in electronics manufacturing. In 2014, the value of electronics produced in India was $29 billion which increased to $70 billion in 2018. There were only two mobile phone manufacturing units in India in 2014. Today, there are 268 mobile phone, components and accessories units in India. India has now become the second largest mobile phone producer in the world. It feels great when I read behind an iPhone, “Designed by Apple in California. Assembled in India”.

India offers a huge domestic market as well as a very competitive export product manufacturing base for the electronics industry. The talent pool of professionals, strong software industry, low cost of labour, friendly government policies and now a corporate tax rate as low as 15 per cent makes India a great destination for global electronics manufacturers. I would urge the global electronics industry to invest in India and I assure them of full support from the government.

What is your take on critics who claim mobile phones that are being produced in India are merely assembled and have low domestic value addition?

When we started encouraging mobile phone manufacturing in 2014, there were only two manufacturing units in India. The electronics industry needs a fully developed ecosystem of various component manufacturers, service providers, design solution providers etc. We started by inviting major mobile phone manufacturers to set up their units in India and allowing them to import components. But at the same time, we developed a Phased Manufacturing Plan with the industry where we incentivised gradual domestic value addition. This has gradually allowed the component manufacturers and other service providers to start their work from India. You will notice that each year the domestic value addition has been increasing and we are working to enhance it further. This approach has created nearly 500,000 new jobs in the electronics manufacturing sector which is only increasing day by day.

Despite great success in electronics manufacturing in recent times, exports of electronics are still less than $10 billion. Is there a roadmap to change this?

Yes. Our efforts are geared towards encouraging exports of electronics from India in a big way. When we say Make In India, it means manufacturing for Indian markets as well as for the export markets. Export promotion is an essential component of Make in India and our policies are geared towards that. More efforts are being made to develop India’s electronics manufacturing export oriented. Certainly, we will see a fast rise in electronics exports from India in the near future.

There is a feeling that the Government of India is focussing mostly on the mobile phone basket and not enough on other consumer electronics goods. Your comment on this.

India has cut corporate taxes but bottlenecks remain. How long will it take for India to become competitive vis-à-vis economies like China?

The Modi government has taken a very bold decision by reducing the corporate tax rates to 15 per cent from 30 per cent. This, coupled with measures to improve the ease of doing business in India, has really encouraged the investors’ sentiments in India. That is why India received $65 billion as foreign direct investments in FY 2018-19, which is the highest ever in a financial year. Even in the first quarter of FY 2019-20, the FDI received in India is 28 per cent higher than the same quarter of the previous year. We are working towards removing all other disabilities to make India a competitive and favourable destination for global investors. India’s ranking in the World Bank’s Ease of Doing Business Index improved from 142nd in 2014 to 63rd in 2019. There are improvements in every aspect of doing business including land and labour laws. Whatever more needs to be done will be done by our government.

We have start-ups like Flipkart, Oyo and PayTM that have replicated the success of companies in the West. When will we see an Indian Google, Facebook, Twitter or Tesla emerge?

It is our collective desire as well as effort to see that an Indian Google, Facebook, Twitter or Tesla emerges. In the last five years, Prime Minister Modi has given a lot of emphasis on innovation and entrepreneurship in India and that is why, in a short span of five years, India has become the second largest start-up ecosystem in the world. There are 24,000 registered start-ups in India. Nearly 8,000 of them are deep tech start-ups. 24 of these start-ups have become unicorns. Our government brought out a dedicated Start-up Policy with several incentives for start-ups. In 2019, we also brought out the National Policy on Software Products to develop the software product potential of India. According to a recent trend, India is fast becoming a preferred destination for tech start-ups for research and development works, which clearly implies that India is an attractive destination not merely because of low cost of labour but also because of a highly qualified talent pool. Hopefully, with these sincere efforts from the government and the rising entrepreneurial appetite of innovators in India, we will get to see a world-class internet giant from India.

You mentioned that Digital India is bringing about inclusion and empowerment. What steps have been taken to achieve this goal?

It is Prime Minister Modi’s vision to transform the lives of ordinary citizens by using the power of technology. Earlier, digital technologies were confined only to the educated and urban sections of society. Digital India has taken the benefits of technology to the poorer sections and improved their lives by ensuring access to entitlements and information in an easy, affordable and efficient manner. We created a tech-based platform of Direct Benefit Transfers to send financial entitlements of the low-income group directly into their bank accounts. This led to savings of $19.8 billion – an amount that was earlier going into the hands of fake beneficiaries or middlemen. Access to the banking system was a distant dream for this demographic until 2014. In the last five years, India opened more than 370 million bank accounts for low-income individuals using their digital identity Aadhaar and created a global example in financial inclusion. Building on this, India has created homegrown fintech products which these people can use to carry out their banking transactions using biometric-based micro ATMs in their villages, without needing to visit a bank branch. More than 350,000 Common Service Centres – digital service delivery kiosks –that are offering banking, eGovernance, skilling, digital literacy, utility bill payment services to common citizens have been set up in small towns and rural areas. India has also undertaken the world’s largest digital literacy program to make 60 million rural adults digitally literate. Several such measures undertaken by our government has indeed made inclusion and empowerment using technology a reality.

Could you share some of the achievements in the digital payment sector?

India is one of the fastest growing digital payment ecosystems now. In November 2016, a total of 918 million digital payment transactions worth $1.57 trillion were recorded, which increased to 3.32 billion transactions worth $4.8 trillion in July 2019. The Unified Payment Interface (UPI) platform, which is a unique Indian innovation, has allowed the proliferation of easy and simple mobile-based digital payments. Aadhaar Enabled Payment System (AEPS) is another Indian fintech innovation that uses the Aadhaar biometric of a user to authenticate digital payment transactions from their Aadhaar linked bank account, enabling even an illiterate person to make digital payments. RuPay debit and credit cards have been given to most of the Jan Dhan bank accounts opened for underprivileged people. All this has created a very vibrant digital payment ecosystem in India, which is growing very fast and is leading to the creation of a clean, transparent and robust economy.

What is your big vision for a digital future?

India missed out on the industrial revolution because of colonial occupation. India also missed out on private sector led growth in the second half of the 20th century due to the license-permit-quota regime. India will not miss the digital revolution but rather it will be a leader in this. The Indian government has already set up many centres of excellence in emerging technologies like Artificial Intelligence etc. We are working closely with industry, academia and innovators to develop a vibrant ecosystem in emerging technologies. The Government has also prepared a roadmap to develop India as a $1-trillion digital economy by 2024 as part of the larger effort to make India a $5-trillion economy. India’s digital future is very bright, optimistic and full of opportunities.