India is already looking to the opportunities of Brexit 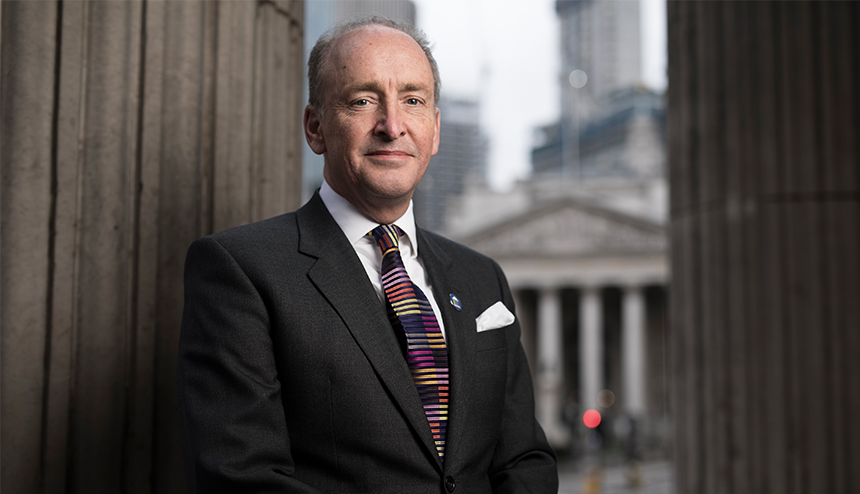 Charles Bowman, the former Lord Mayor of London in charge of nurturing lucrative investments for the City, delves into his recent FinTech delegation to India, overcoming Brexit concerns to ensure London’s enduring attraction as a financial hub for Indian companies and opening up areas such as payments, regtech, insuretech and blockchain for India-UK tie-ups.

What are some of the highlights from your recent fintech delegation to India?

My visit to India is one that will live long in my memories of my time as Lord Mayor of London. Everywhere I went I was received at the highest levels, and in the most welcoming fashion – a real reflection of the strength of the current trajectory of UK-India relations.

The UK has been the top G20 investor in India over the last 10 years, and bilateral trade in 2017 came in at just over £18 billion, up over 15 per cent on the previous year.

Yet financial services accounted for only around £350 million of this, a figure up 7 per cent on 2016, but one that accounts for just 0.25 per cent of the total trade picture. Clearly there is room to grow our relationship in this area, and over the course of a week in India I visited industry and government leaders to discuss exactly how we can do this.

In total I visited three cities. In Mumbai, India’s financial centre, we celebrated the success of the City Corporation’s representative office, which is this year celebrating a decade in market. I also met with the SBI Chairman, Rajnish Kumar, and his team, who welcomed my party and me to an evening reception to celebrate our near century long relationship.

Down in India’s Silicon Valley Bengaluru, I was taken to several incubators and accelerators, where I was shown an astonishing array of innovative products and services being developed in India. There was a real buzz about the place, and it was fascinating to be shown a glimpse of the future of Indian technology and finance.

Meanwhile in Delhi, my last stop, I met with several government figures, including the Minister of Finance Arun Jaitley, the Minister of Commerce and Industry Suresh Prabhu and the CEO of Niti Aayog, Amitabh Kant. In each of these meetings I reaffirmed the City’s commitment to the Indian market, and to building the relationship between our two countries in financial services.

Does Brexit seem to worry Indian companies looking to collaborate with, or expand to, the UK?

As Lord Mayor of London, I have spent approximately 100 days overseas during my year in office visiting some 27 different countries. Brexit has come up in conversations on a regular basis over the course of these trips, and in India things were no different.

But what is blindingly obvious to me following my visit is that Indian companies care more about the future of the UK-India relationship, rather  than the current negotiations with our European partners. During my meetings it was clear that business and government leaders are already looking to the opportunities of Brexit and the potential for increased trade between our two great countries.

This was also shown in the UK back in April, when Prime Ministers Modi and May recognised the great potential for cooperation by launching the India-UK Tech partnership. At the time, PM Modi stressed that the City of London is of “great importance to India”, and will remain so. I wholeheartedly agree and look forward to hearing how we can take our relationship to the next level.

What are some of the key sectors you would highlight within the India-UK fintech collaboration?

I led a delegation of 11 firms to India, mostly fintechs, to pitch to investors, regulators and potential partners over the course of a week. The response they received was phenomenal, and showed just how much interest there is in our country’s leading expertise in this area. London’s expertise  perfectly matches India’s fast-growing fintech market, currently worth $33 billion and forecast to reach $73 billion by 2020 KPMG.

The group was made up of UK companies in the fields of payments, regtech, insuretech and blockchain – all areas where the UK and India have much to gain from working together. Let me take insurance as an example, as during my visit I launched a new report the City of London Corporation has produced with PwC India on Insuretech.

Insurance penetration in India is 3.41 per cent – half the world average of 6.13 per cent – and there is much expertise the UK can share to increase this. After all, London is home to the biggest insurance market in Europe and fourth biggest market in the world, and is well placed to support the Indian government’s initiatives in this area, providing digital platforms that can connect micro-insurers, insurers, policyholders, and intermediaries, and increase insurance take up.

What are the India-UK case studies that are delivering results within this sector?

Two insurance firms accompanied me on this visit – Wrisk, and Skyline Partners – the latter of which secured funding during my visit and announced plans to launch its inaugural weather insurance product to offer protection to the Indian farmers by next year. This is a real win for both countries, and a development that should lead to further collaboration in this area.

Let’s also not forget about Lloyd’s of London, which as you know has been in India since 2017. With the country’s general insurance market growing at 12-15 per cent, the firm is already looking to increase its business from the country, and the number of syndicates under its umbrella in India.

Elsewhere in payments, Worldpay, who were also on my visit, have been active in the Indian market for a number of years, and have an office in Indore. They have much to offer India, which is expected to see total transactions on retail digital payment platforms explode by 400 per cent to INR 1 trillion by 2023.

In fact, the country’s fast-growing innovative fintech industry, which I’ve seen first-hand at start-up accelerators and incubators, is already worth $33 billion, and is forecast to grow to over $70 billion by 2020.

The UK and India are already working closely together in fintech through the UK-India Tech Partnership, with the new FinTech Rocketships helping to boost entrepreneurship and two-way trade and investment links. There’s also the upcoming Future Tech Festival in Delhi to look forward to, which my visit laid the perfect groundwork for.

Do you see London holding on to its position as a Masala Bond hub beyond Brexit?

Our strong position in this area is thanks to London’s unrivalled global investor base and unparalleled pools of deep liquidity, which has led to the capital being home to 70 per cent of the total global Masala bond market. In fact, confidence was again shown in London recently when IFC, the World Bank’s lending arm, launched the first $100 million tranche of its $1 billion masala US Europe bond programme on the London Stock Exchange.

Are concerns around visas, especially for the IT sector, casting a shadow over closer ties?

I know there are concerns in some corners of the Indian community about this, but it’s important to understand the wider picture.

The number of UK visas granted to Indian nationals continues to experience strong growth. In fact, India continues to receive more UK work visas than the rest of the world combined,  with over 60,000 work visas issued last year. In total, more than 550,000 Indians were  granted UK visas in the year, a 10 per cent increase on the previous year, and with an 89% acceptance rate.

At the recent Conservative Party conference, the Home Secretary, Sajid Javid, announced plans for a new approach to immigration that will mean workers from India are treated in the same way as those from the rest of the world, including the European Union. As these plans go forward the City Corporation will of course engage with the government to ensure this system is fit for purpose. After all, as a leading international financial centre we know the importance of access to talent.