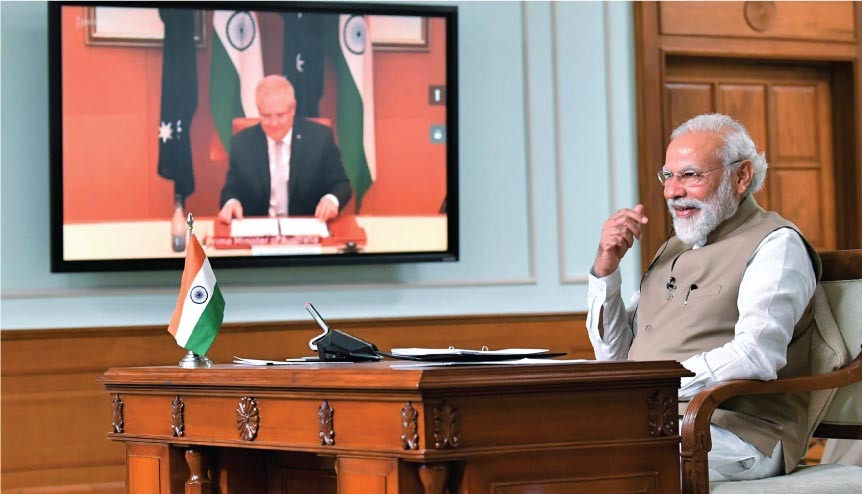 With anti-China sentiment at an all-time high, there is a renewed push to reinstating the Quad, the grouping of US, Japan, India and Australia. Its fate depends largely on India.

India’s Prime Minister Narendra Modi and his Australian counterpart Scott Morrison’s first ever bilateral virtual summit on 4 June happened at a time when India and China find themselves at loggerheads once again. A standoff between the armies of the two most populous nations in the world in Ladakh’s Galwan province has stretched into its second month and the generally frosty relations between the two nations are at a new low.

The Dragon and the Koala 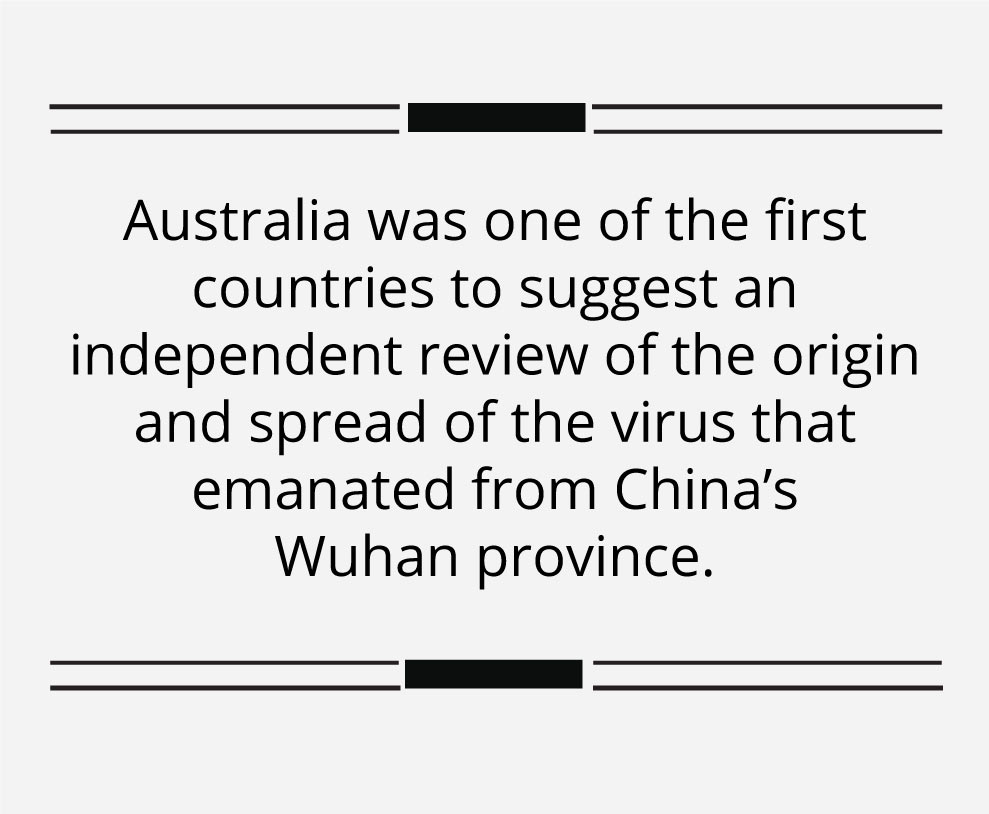 In relative terms, Australia has far better terms with China. The dragon is easily its largest trading partner and has been a major investor in many sectors like mining, agriculture, real estate and infrastructure. The largest tourists and foreign students in Australia are also Chinese. With no historical or territorial conflict to strain relations, the two countries have mutually benefited each other for over two decades now.

The coronavirus pandemic has, however, seen a rapid souring of relations. In mid-April, Australia was one of the first countries to suggest an independent review of the origin and spread of the virus that emanated from China’s Wuhan province. That suggestion soon turned into a demand as more countries joined in forcing China into a corner in multilateral forums. Relations have quickly gone southward since with China threatening to boycott products like beef and wine from Australia while asking its citizens to not visit the island continent.

A renewed vigour to an old partnership

Discussions between Modi and Morrison did not refer to China directly even once but there is a lot that can be read between the lines. The two countries elevated their strategic partnership that they embarked upon in 2009 to a comprehensive strategic partnership making Australia only the fifth nation that India has a CSP with. A joint statement on a shared vision for maritime cooperation in the Indo-Pacific will have some relevance to China. Besides these seven other agreements were signed, including a landmark defence pact, MLSA, and MoUs on critical minerals, education, water, and critical technology cooperation.

The most critical development was off-record-India agreeing to include Australia in the trilateral Malabar naval exercises that also includes the US and Japan. Australia has been trying to become a part of it for quite sometime but the rejections in the past have often been at the behest of India. The country’s relatively cordial relations with China made it an outlier to the other parties. 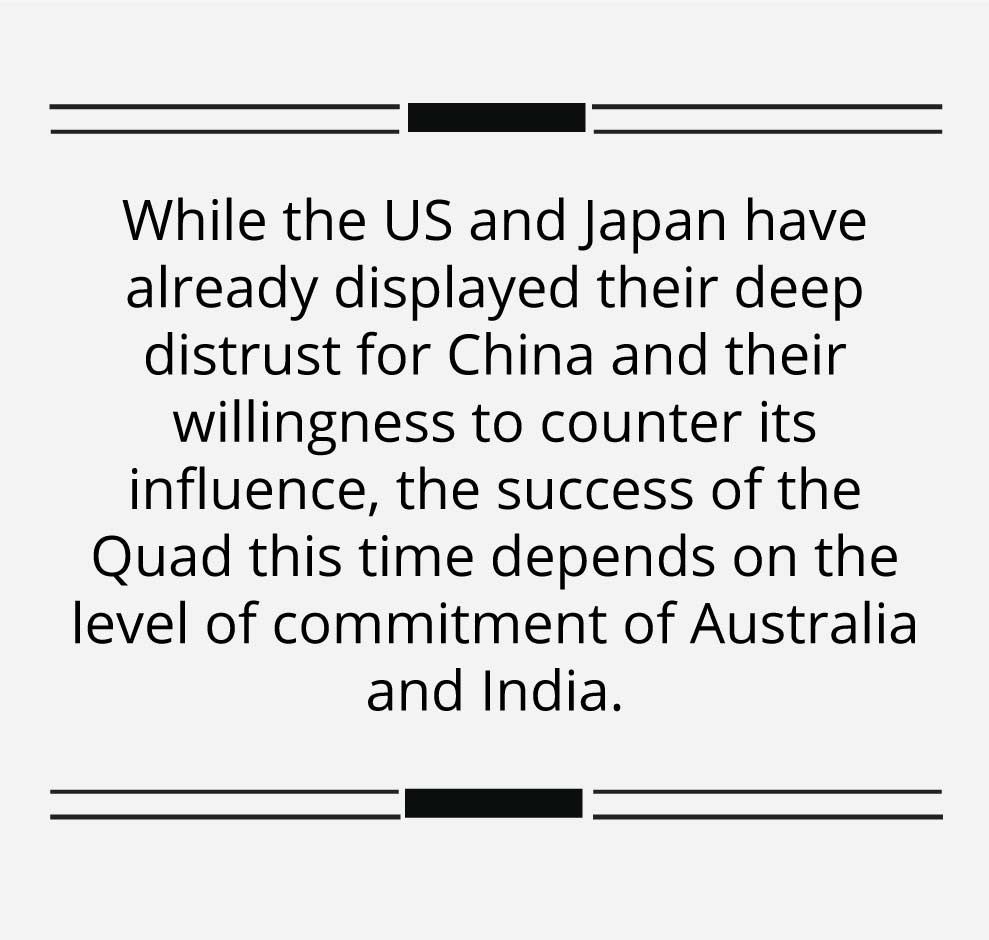 It has once again put the focus on the Quad – the grouping of the four nations, that first came into existence in 2007. The four countries ganging up together to check the rise of China in the larger Asia pacific-region was something that Beijing was always wary of. So much so that it pulled it diplomatic weight to dissuade Australia from getting into it which meant the Quad remained dormant all this while. And Australia in turn, stayed out of Malabar.

The pandemic has changed the dynamics of global diplomacy. The US under Donald Trump is clearly leading the charge against China and while his attempt at bringing Russia on board and expanding G7 into a G10 or G11 may not fructify, it will further underscore the Quad’s emergence as the most constructive opposition to the rise of China.

While the US and Japan have already displayed their deep distrust for China and their willingness to counter its influence, the success of the Quad this time depends on the level of commitment of Australia and India.

“There are concerns about China’s reaction should the Quad assume a concerted effort to containing it and doubts whether Australia will stay committed given the fact that they have close ties with Beijing,” says Harsh V Pant, Director, studies and head of strategic studies programme at Observer Research Foundation. “Within Australia there is considerable anxiety over the consequences of the Quad on Sino-Australian relations. If the four-member grouping can prevent itself from collapsing as it did in 2007, because of tactical considerations India, Japan and Australia can move towards cooperation that is more robust.”

Building defences against the Dragon

As a matter of policy, India has been averse to joining any kind of formal alliance targeted against a particular group of nations. It is also most vulnerable to any kind of backlash from China. 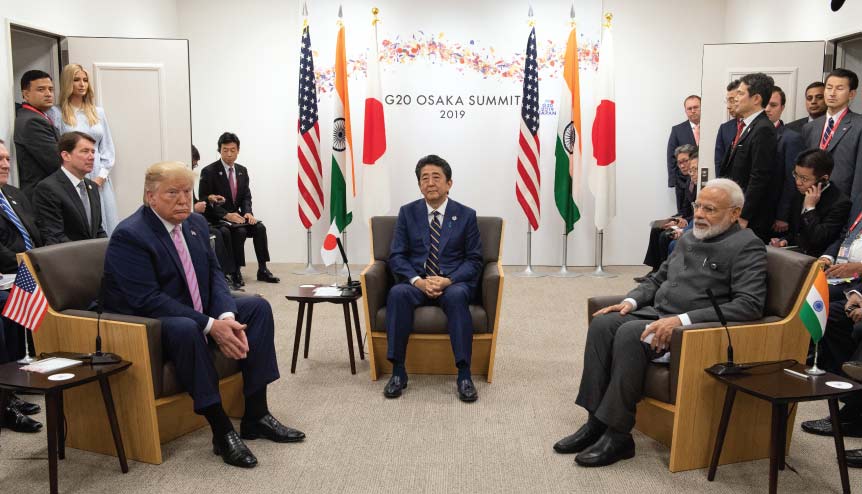 “India is the outlier among the four because of its greater vulnerability to Chinese retaliation and lesser capacity to absorb any punishment. The Quad can be meaningful if we push in areas that bear Indian limitations and interests in mind,” says Dr Lavina Lee, senior lecturer in Sydney’s Macquarie University. “The Quad could also create an Indo-Pacific critical infrastructure fund as a viable alternative to China’s Belt and Road Initiative (BRI) for small states that are vulnerable to debt-trap diplomacy as a result of their geo-strategic value to China. To keep India committed, that fund should include economies around the Bay of Bengal in India’s backyard.”

China’s perennial hostile reaction to the concept of the Quad indicates its nervousness to the potential this grouping has. It has leveraged its relations with Australia in the past to stonewall the partnership. The new flashpoint in Ladakh may be seen as its latest attempt at intimidating India out of the arrangement.

Isolated from all sides, the dragon may have bitten a bit too much to swallow this time.