With a proposed $7 billion tranche of investments, the India-UAE Food Corridor is the springboard for massive growth in the agri sector that will help create more than 200,000 jobs in India.

For a country accustomed to importing nearly 90 per cent of its food requirements, building a strategy for not only self-sufficiency in food products but also an emergency stockpile for large-scale calamities would seem like a tall order. 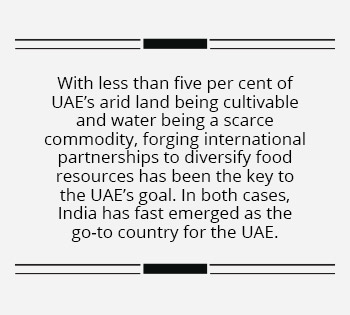 But that is precisely what the United Arab Emirates would like to achieve through its National Strategy for Food Security 2051 – a long-term strategy to enable the fast-growing population of the Arab economic powerhouse access to healthy, safe, nutritious and sufficient food at reasonable prices in all circumstances, including unprecedented crisis. That latter prospect has loomed large on the minds of policy-makers in the backdrop of the coronavirus pandemic – speeding up efforts to quickly boost food security.
But achieving that goal is not easy. 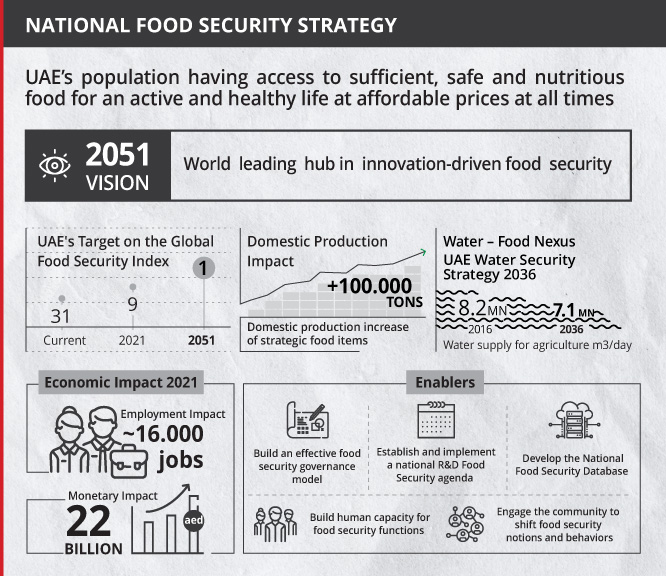 With less than five per cent of UAE’s arid land being cultivable and water being a scarce commodity, forging international partnerships to diversify food resources has been the key to the UAE’s goal, along with ramping up sustainable technology-based local produce.

In both cases, India has fast emerged as the go-to country for the UAE in its ambitious quest for food security.

30% of food in India goes to waste due to lack of infrastructure
"What the $7B UAE-India food corridor means to businesses in the region"
The story of a South-South partnership to develop #transport & logistics infrastructure to enhance food securityhttps://t.co/g1yU8CjYd3 pic.twitter.com/QaQulFY3PG

While India grows enough food for its 1.3 billion people, nearly 30 per cent of that goes to waste due to lack of proper infrastructure such as storage, transportation and technology – and India also aims to be a $5 trillion economy by 2024. 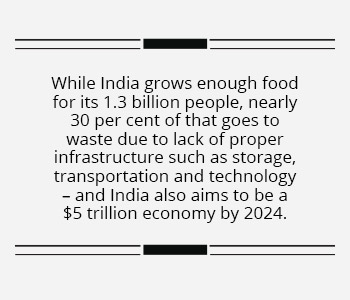 India and the UAE have thus discovered enormous convergence in bilateral needs to be able to set up the UAE-India Food Corridor – a unique bilateral vehicle in which UAE-based companies have already pledged to invest up to $7 billion as part of the two governments’ efforts to boost ties in the agri sector. 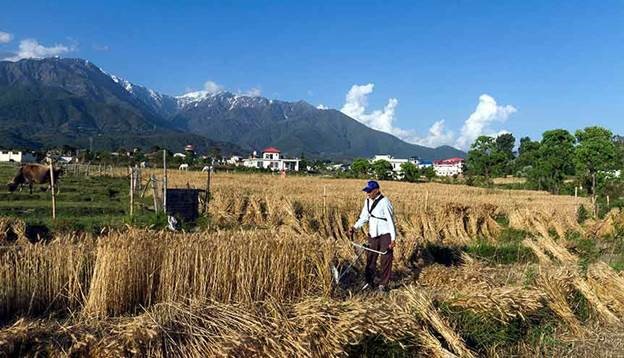 A massive potential has been highlighted in the food sector between India-UAE with as much as 200,000 jobs set to be created in India.

Industry experts speaking at the recent India-UAE Food Dialogue highlighted the massive potential of the corridor and the long-term strategy, which will help create more than 200,000 jobs in India.

“Entities in the UAE have expressed their interest to invest up to $5 billion in mega food parks, logistics and warehouse hubs, fruits and vegetable hubs in various Indian cities, which would create 200,000 jobs across India,” Piyush Goyal, Minister of Commerce and Industry, said last year during a visit to UAE. The remaining $2 billion would be geared towards contract farming, sourcing of agro commodities and related infrastructure, Goyal said.

Modi’s reforms, future growth sets off mother of all bull runs in India

The 30 per cent of Indian produce that gets wasted each year can be curbed through investment in food processing, while assuring better rates for UAE-based buyers and Indian farmers, he said. 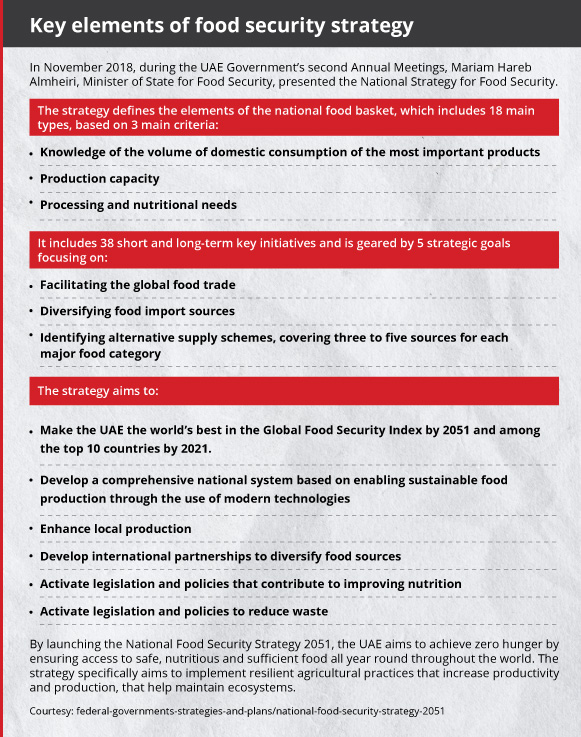 Evidence of the growing synergy between India and the UAE in this regard came last week at the Food Dialogue – a virtual event co-hosted by the Dubai Chamber of Commerce and Industry’s Mumbai office and the Confederation of Indian Industry (CII) on the sidelines of India International Food & Agri Week.

It was attended by 310 participants from India, the UAE and other markets, including businessmen, industry stakeholders and policymakers.

According to Omar Khan, Director of International Offices at Dubai Chamber, the India-UAE Food Dialogue offered valuable insights on UAE-India trade ties, which have evolved and strengthened after the two countries announced a comprehensive strategic partnership to pave the way for increased cooperation across several industries and fields.

Boosting non-oil trade beyond $60B 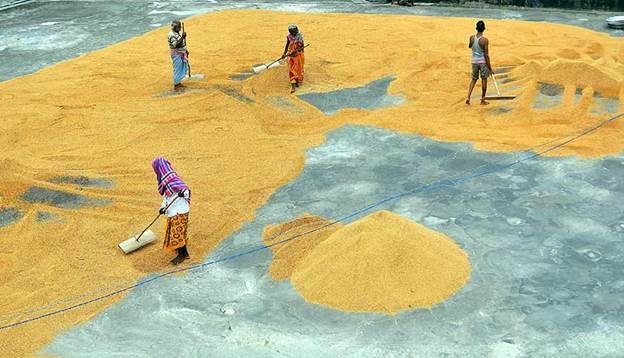 Given the changing trade dynamics and disruptions to global supply chains as a result of the COVID-19 pandemic, it is crucial that the UAE and India collaborate to enhance food security.

Given the changing trade dynamics and disruptions to global supply chains as a result of the COVID-19 pandemic, Khan noted that it is crucial that the UAE and India collaborate to enhance food security. The UAE-India Food Corridor would be a key pillar that would take UAE-India relations to the next level and significantly boost bilateral non-oil trade well beyond the $60 billion accounted for in 2019. As a preferred trade hub for Indian businesses, Dubai can unlock this potential as it offers several competitive advances, such as its world-class logistics and transport infrastructure, as well as a strategic geographic position enabling Indian food exporters to expand their reach across GCC markets, Khan said. 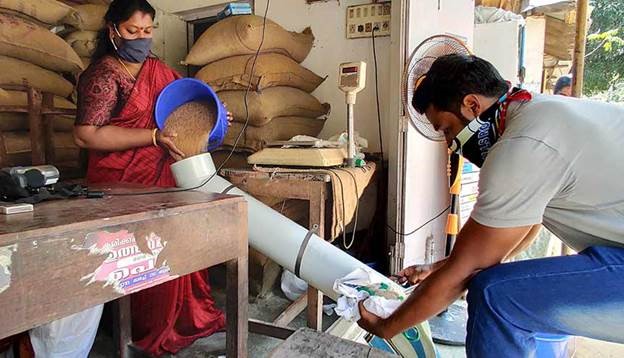 India’s new farm bills have empowered the farmer by giving them direct access to the market and this is one of the biggest initiatives to boost food trade.

Speaking at the Dialogue, Piruz Khambatta, Chairman of the CII National Committee on Special Abilities and CII Task Force on Ease of Doing Business & Chairman & Managing Director, Rasna International, said that the new Farm Bills introduced to empower the farmers in India by giving them direct access to the market, is one of the biggest initiatives that aim to boost India’s food trade, alongside the Atma-Nirbhar or self-reliant India initiative that provides benefits, subsidies and low-interest loans for the food sector. 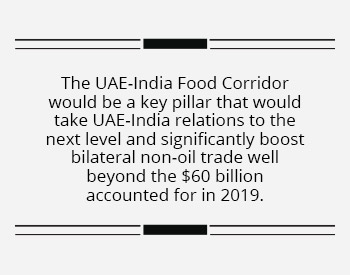 Khambatta noted that logistics costs remain a key challenge for traders of fresh fruits and vegetables within India, however, added that planned infrastructure enhancements are expected to reduce the time and costs associated with food transportation.

With sustained effort and the combined commitment to tackle logistical challenges and infrastructure enhancements, the India-UAE Food Corridor is therefore poised to usher in an era of peace, security and prosperity for stakeholders both in India and the UAE.