Skip to content
India and Russia tango in Vladivostok, but…

India and Russia tango in Vladivostok, but… 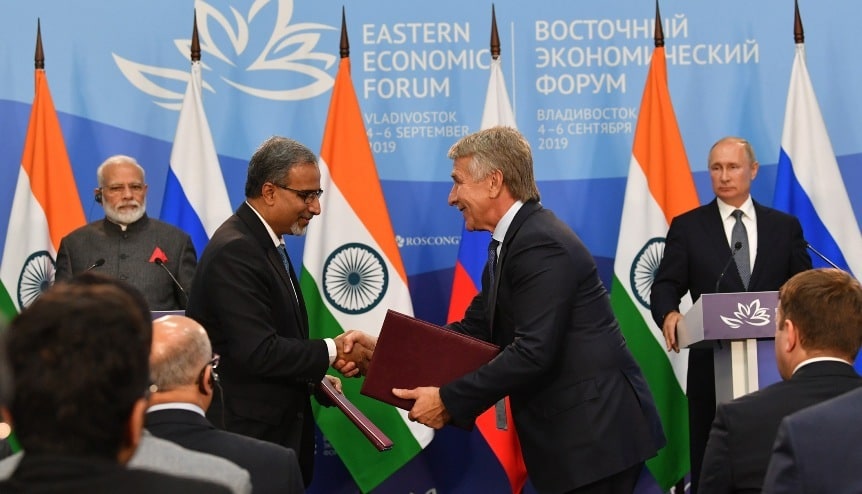 India’s reaffirmation of its friendship with Russia and the opening of new business opportunities will make some in the West uneasy, but the imperative of containing the shadow of the big dragon in the room should bring everyone around, writes India Inc. Founder and CEO, Manoj Ladwa.

I don’t think it’s ever happened before. When Indian Prime Minister Narendra Modi announced a $1-billion line of credit for the development of the Russian Far East, it probably marked the first time India was extending such assistance to a country which, until a few decades ago, was doing the same for India.

But there’s a reason for this that lies beyond economics. Moscow needed a more than a subtle signal to tell China that Russia can turn to others if the need arises. And India is that credible, rising power. China has also been aggressively pushing its military presence in its own areas bordering the Russian Far East region.

There are, of course, more mundane reasons for this renewed show of friendship.

Russia is India’s oldest strategic ally. Ask anyone on either side and you will get a standard reply: bilateral ties remain very warm and the two countries remain each other’s all-weather friend.

If you dig a little deeper, though, you will discover some signs of wariness. India has been cagey about Moscow cosying up to Beijing and the rising warmth in relationship with Pakistan while Russia is suspicious of New Delhi’s tango with Washington. So there are a lot of diplomatic chess moves going on.

Despite this, Russia and India remain extremely important to each other as more than 70 per cent of Indian military platforms are of Russian origin and India is still the largest importer of Russian arms in the world.

So, it wasn’t surprising that Russian President Vladimir Putin invited Modi to be the chief guest at Eastern Economic Forum, a summit aimed at bringing investments and development to the Russian Far East, stretching to the Pacific Ocean. The region borders with China, Mongolia and North Korea and a maritime boundary with Japan.

India’s interest in the region is both strategic and economic. It is rich in oil, natural gas, timber, gold and diamond among other resources that India is interested in.

In fact, ONGC Videsh, the foreign investment arm of India’s national oil explorer, has a $6-billion investment in the Sakhalin oil fields in the region. Then, the area is home to the MiG and Sukhoi aircraft factories. These fighters form the backbone of the Indian Air Force.

India  realised the geo-strategic significance of the region long ago and opened a consulate at Vladivostok, the capital of the Russian Far East, in 1992 but for some inexplicable reason, further development of ties with this region had to wait till Modi’s first term as Prime Minister.

Last year, India and Russia agreed to a sea link between Vladivostok and Chennai that will cut down the transport time from 40 days at present to 24 days and emerge as a potential rival to the Chinese Maritime Silk Route, which is part of its ambitious Belt and Road Initiative spanning the globe.

“We are starting a new era of cooperation in the Indo-Pacific region,” Indian Prime Minister Modi said shortly before being hugged by Putin in a very public and very strategic display of affection.

Even as he pushes India’s strategic interests in this region, Modi will have to carefully balance it with New Delhi’s growing strategic engagement with an unpredictable Trump led administration, which has blown hot and blown cold on its own, and other countries’, relationships with Russia.

The increased engagement, the line of credit and India’s purchase of the SS 400 Triumph anti-missile shield from Russia in the face of opposition from Washington – will cause irritation in influential quarters of the US administration.

But with Donald Trump batting for the re-inclusion of Russia in the G-8, India’s tango and renewed interest in the region may in fact be viewed as timely and useful.

If nothing else, the imperative of containing the shadow of the big dragon in the room should bring everyone around.