How India has become a nucleus for global sports business

How India has become a nucleus for global sports business 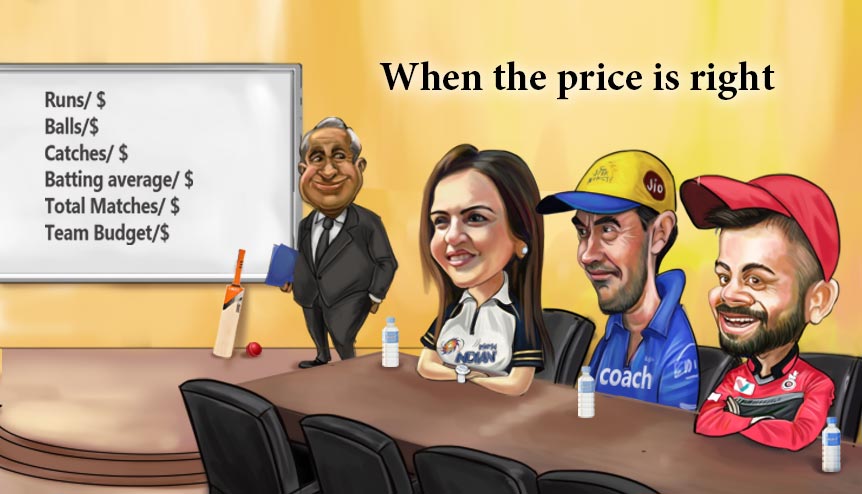 From IPL and ISL to Pro Kabaddi League, Premier Badminton League and Pro Wrestling League, the country is laying the foundations for a solid commercial innings for its sport industry and this in turn is benefiting the professional sporting fraternity. 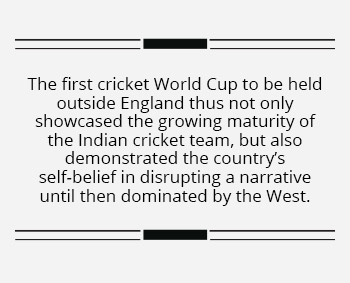 When India captain Kapil Dev lifted the World Cup trophy at Lords in 1983, it was a moment that changed the landscape of sport in the country, as well as inspired future generations of cricket legends such as Sachin Tendulkar, Virat Kohli and Ravichardran Ashwin.

But that brilliant achievement also spawned one of the most disruptive moments in the history of Indian sport – leading to the successful bid for the 1987 Reliance cricket World Cup for the first time in the subcontinent.

Despite the success of 1983, the run-up to hosting the 1987 cup in India and Pakistan was a tough and tenuous one.

Have you read? India’s links with the Arab world strengthens with the IPL 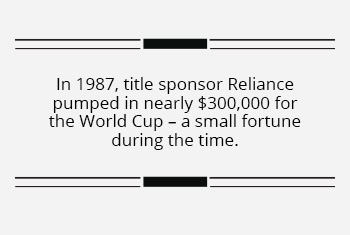 First up was the utter skepticism of the then cricket administrators, historically used to hosting it in England. Even as Indian cricket administrators bid for the staging rights of the 1987 World Cup, there was palpable consternation among the gentry of cricket whether the infrastructure-impoverished Indian subcontinent was fit enough to host an event of such magnitude. Purists scoffed at the prospect and the mandarins of International Cricket Council did their best to scuttle the bid – leading to that famous quip by India’s Inderjit Singh Bindra, that while “Britannia was accustomed to ruling the waves, it had also gotten into waiving the rules.” 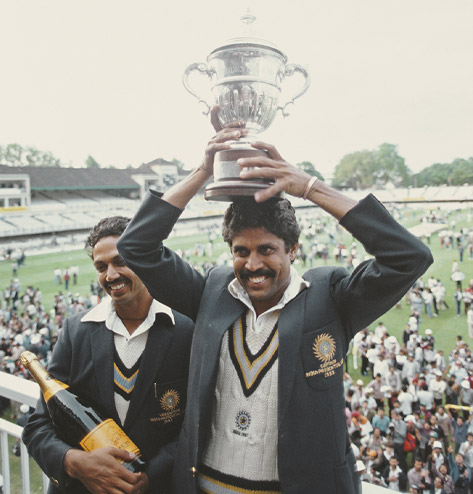 Making history! Indian captain Kapil Dev with the World Cup trophy in 1983. The Indian cricket board’s doggedness to seal the contract to host the ‘87 World Cup ultimately worked out in India’s favour and this changed the perspective of sport business in India.

Recalling the days of 1987, this is what Former West Indian cricketing legend Viv Richards had to say: “The Reliance Cup was a wonderful experience… the organisation was excellent. The support from the spectators was overwhelming and as performers, the cricketers should have had very few complaints, it at all. I think the Reliance Cup effectively quashed the belief that a tournament of this nature could be stage-managed in one country only.”

The first cricket World Cup to be held outside England thus not only showcased the growing maturity of the Indian cricket team, but also demonstrated the country’s self-belief in disrupting a narrative until then dominated by the West. In purely sporting parameters, the Reliance Cup of 1987 was therefore a more pivotal event than winning the 1983 cup.

Back in 1987, apart from the nationalistic fervor ignited by the 1983 victory, one of the key reasons for the cricket World Cup’s roaring success lay off the field. The Reliance Cup drew more viewership for the event than ever and was a massive win in terms of cricketing revenue and media coverage – it brought India under limelight of the global sport industry, justifying the money, sponsorship and glamour that followed. 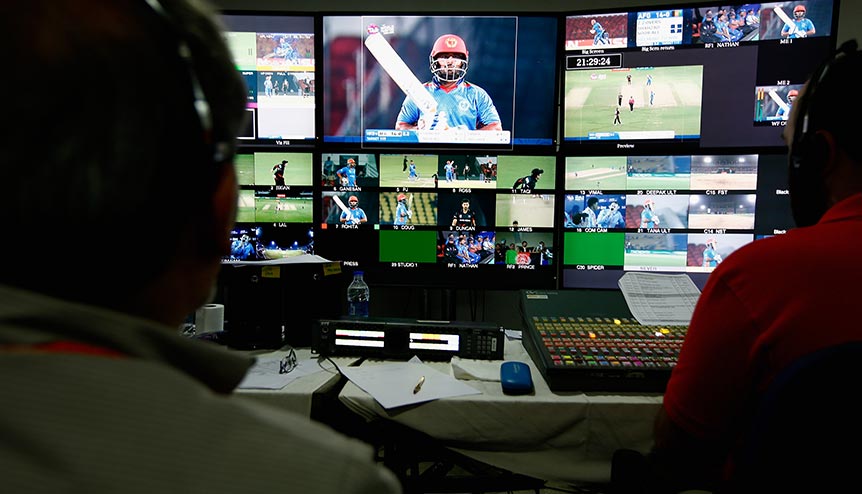 The 1987 Reliance World Cup became a vibrant and memorable landmark in Indian history. Today the sport of cricket draws huge viewership, sponsorships, revenue and media coverage bringing India under the limelight of the global sports industry.

In 1987, title sponsor Reliance pumped in nearly $300,000 for the World Cup – a small fortune during the time. More than 30 years later, India’s sport industry has come a full circle as Reliance under Mukesh Ambani looks at ways to grow the Indian Super League – the country’s top-flight football league that boasts the patronage of Asia’s richest man and the cream of Bollywood. The aim of the league, when it was launched in 2014, was to attract global investment and football legends from around the world, much like its cricket counterpart – the Indian Premier League. 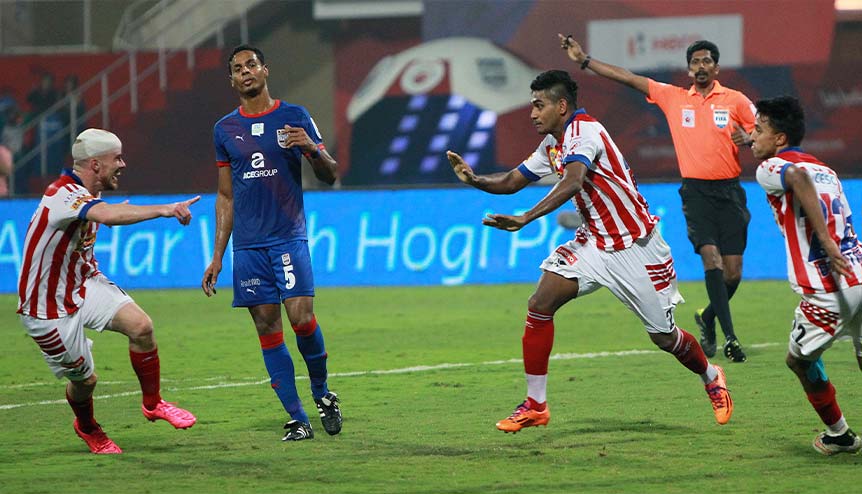 The Hero Indian Super League (ISL) saw a big push from the country’s corporate mandarins. The ISL has now redefined the financial future of football in the country.

With the massive grassroots popularity of the tournament, ISL has come to redefine the financial future of football in a country where cricket is a religion. With significant investments from Ambani’s Reliance Industries and other corporate bigwigs, ISL is helping shape India’s emergence as a world force in the game, recalling former FIFA president Sepp Blatter’s description of Indian being a “sleeping giant”. With this trajectory of growth, Indian football could – thanks to its purely commercial lure – face its 1987 moment very soon: the ultimate dream of hosting the football World Cup.

“While sports is an organised business in developed economies, this has been a Government-led initiative in India where corporate sector’s presence have often been through corporate social responsibility channels,” said Jaideep Ghosh, partner, KPMG India. “The exception has been the commercial sporting formats leagues, especially in cricket, where corporate sector has been very active in recent years. It is critically important to build a dynamic sporting culture in India and the need for the government and the private sector to collaborate to strengthen the sports industry. Inadequate public resources for sports and low prominence of non-cricket sports impede our performance in the global sporting arena,” he said.

The evolution of Indian sports 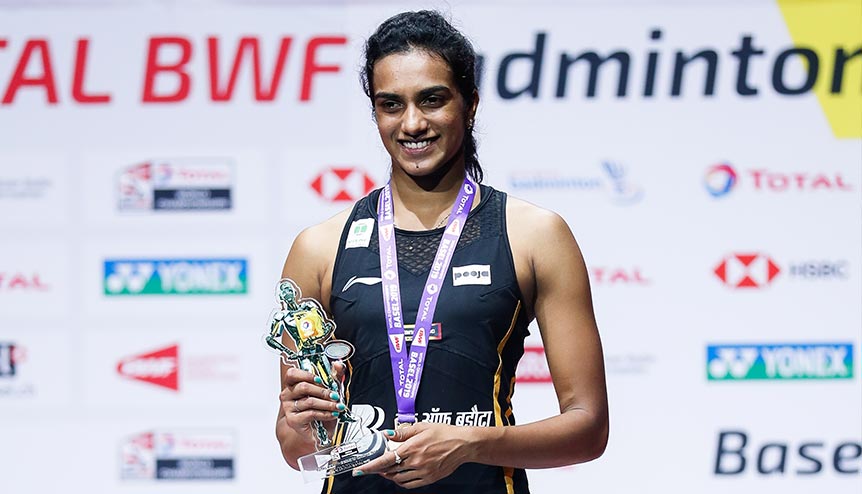 Pusarla V. Sindhu of India poses with her medal after the Total BWF World Championships 2019. Indian sports is seeing an evolution across disciplines.

The visible signs of that dynamic culture of sport taking shape across India are everywhere – whether it’s the Pro Kabaddi League, the Premier Badminton League, the Pro Wrestling League, Pro Volleyball League or Ultimate Table Tennis (UTT). From cricket, India’s die-hard fans and TV viewers seem to have dived into a new sporting heaven that brings them an entire gamut of every game – from tennis, football, badminton and kabaddi to volleyball, chess and even kho-kho.

“The vastness of India’s sports sector and association with several other industries such as education, real estate, infrastructure, tourism, manufacturing and retail, makes it extremely attractive,” said the KPMG in a report on the sector. “India’s Draft National Sports Development Bill, 2013, recognises 66 kinds of sport. Even if a few of the recognised sports are fully developed and monetised, sport as a sector can contribute significantly to the country,” it said.

With nearly 25 per cent of the Indian population being under the age of 30, a vigorous sporting culture in the country has encouraged the consumption of community sports as well as big ticket sport leagues.

As the global sport industry grows to cross $600 billion and contributing to about 5% to the GDPs of various countries, India’s sport sector is ready to wrestle a major bite out of that lucrative commercial pie – and the events of 1983 and 1987 will only cheer on the commercial captains of the industry.

On Thursday: The final instalment on how India has used international sporting events as an instrument of its soft power diplomacy.