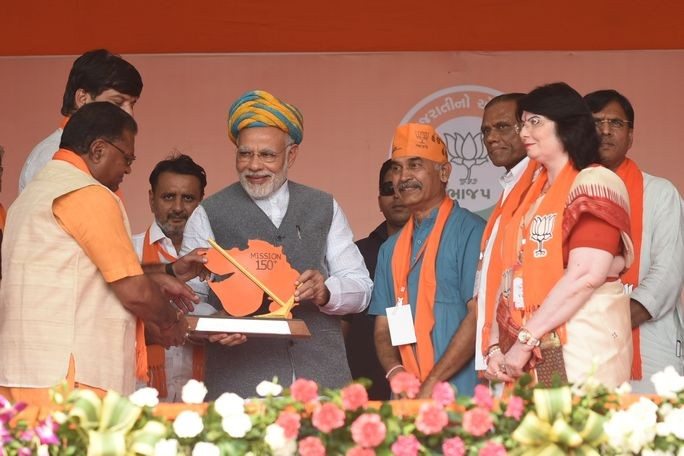 The BJP’s recent state election wins should encourage the government as it proves that good economics is being rewarded by voters.

After a month-long, fractious and often ill-tempered campaign during which some pundits forecast doom for the BJP, the ruling party in Gujarat emerged victorious with 99 seats in a House of 182 – winning a sixth straight term in office.

The election was important. A jolt in Gujarat would have undermined Indian Prime Minister Narendra Modi’s reforms agenda to make deep and fundamental changes in governance and the economy that are expected to set the tone for the coming decades.

Gujarat is the home state of Prime Minister Narendra Modi and party President Amit Shah and the party was expected to win. But this time, the dice was loaded against it.

The demonetisation exercise, which had sucked out 86 per cent of the currency in circulation a little over a year ago, had caused some short-term pain, especially in the unorganised sector.

Then, the rollout of the Goods and Services Tax (GST), arguably the biggest single reform measure ever undertaken in Independent India, was still a work in progress. The teething troubles associated with its rollout had hurt the trading community, which had traditionally backed the BJP.

There was also some farm distress. Since 2014, when Modi came to power in New Delhi, India has faced two years of drought and one year of sub-normal Monsoon. Gujarat was among the worst affected states. Then, global commodity prices were down and this affected the state’s cotton farmers – an important constituency.

To cap all these problems, the BJP faced headwinds from agitations by three powerful local castes, each having sets of sometimes mutually conflicting demands. It was impossible, constitutionally and politically, to accept them.

But the Congress party had gone ahead and promised them everything they wanted despite knowing fully well such decisions would be struck down by the courts. The party stitched up an alliance with three young firebrand leaders and gained a large number of additional votes in the process.

The election, thus, could not have come at a worse time for the BJP.

The general consensus is that it was Modi’s personal connect with a vast swathe of voters that saved the day for the BJP.

Now, let us come to some of the myths that the elections debunked. The BJP’s critics have often labelled Gujarat as the laboratory of Hindutva, which they define as an ultra-nationalist form of Hinduism. Nothing could be further from the truth.

As the cover story in our sister publication ‘India Investment Journal’, titled ‘Gujarat: Laboratory of Development’ in the January 2017 edition, pointed out and as any first-time visitor to Gujarat will see, the state’s road network is easily the best in the country, the citizens get 24×7 electricity, industry is busy and the state remains relatively prosperous.

Then, in Surat, the de facto capital of Gujarat’s mercantile heartland, the BJP swept to victory in 11 out of 12 seats, proving conclusively that voters weren’t misled by false propaganda on GST.

But jobs, the farm crisis and the caste agitation are very real issues. The Prime Minister has already promised to double farm incomes by 2022. The NITI Aayog, the government’s official think tank, I understand has done some work in this regard and the results are expected to start showing within the next few quarters.

The youth and women are two constituencies that had voted very enthusiastically for the Prime Minister in 2014 and in subsequent state elections. There is evidence that a section of millennials who want better educational opportunities and jobs were swayed by the Opposition campaign and also that a large section of female voters stayed away this time. These increasingly swing voters ultimately hold the key to political success for any party.

In the northern hill state of Himachal Pradesh, which went to polls alongside Gujarat, the BJP romped home, winning almost a two-third majority, reiterating the BJP’s position as the dominant political force in the country. The BJP now rules 19 of India’s 29 states, five of them in alliance with other parties. The last time any political formation held sway over this many states was 1983, when the Congress was still the pre-eminent political party in India. That is now a distance past.

Modi has said he has interpreted these results as a mandate for further reforms, which is good news. Good economics is at last being rewarded by voters as good politics.