Skip to content
Digital India has had tremendous positive impact 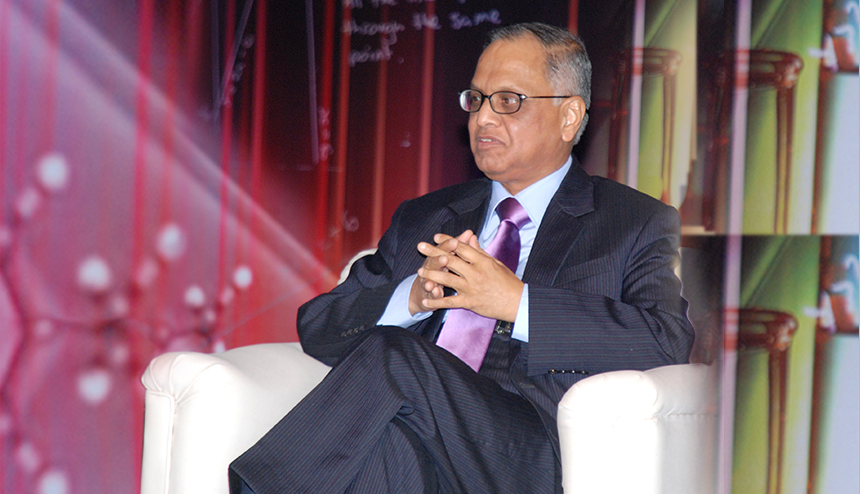 Narayana Murthy is the legendary Co-Founder of Indian software giant Infosys. In this interview, he offers ‘India Global Business’ some insights into the scope of the UK-India Tech Partnership in the lead up to the Future Tech Festival in New Delhi, what Brexit means for Indian IT companies and the true impact of the government’s Digital India initiative on the ground.

What is the significance of collaborations such as the UK-India Tech Partnership?

The UK-India Tech Partnership aims to bring UK and Indian entities in businesses, venture funding companies and universities to use the power of innovation and entrepreneurship to create jobs in the UK and in India.

The summits held so far have brought together such entities from the two countries to showcase their strengths and discuss the possibilities of synergy in adding value to large system integration projects, as well as to leverage the power of new technologies.

The UK is a leader in advanced science and technical education, in wind and other forms of renewable energy, in robotics, artificial intelligence (AI), machine learning, IoT [Internet of Things] and tech applications, including surgery.

Indian companies have excelled in completing large software projects on time, within budget and with very high quality. Therefore, I believe there is much synergy in this partnership to add value to both the UK and India, and help create jobs in these two countries.

How do you see the UK-India economic relationship progressing?

The UK and India have had a long history. Therefore, the need of the day is to create a synergistic partnership between the companies of our two countries.

The UK is a leader in invention and innovation, thanks to its culture of original thinking. At the same time, there is a new sense of confidence and focus on IT in India.

Indian companies have become globally acclaimed for project management expertise of large software projects. They have been able to complete these projects on time, within budget, and with high quality.

Future trade will be balanced between the UK and India, where both the countries benefit. It will be a two-way, balanced relationship where we buy from the UK as much as we export to the UK. Both countries should be able to create jobs for its citizens thanks to the expertise of each of our two countries. That is the kind of healthy relationship we can build, where both countries see great value in doing business with each other.

Such a partnership will become stronger as long as both parties strive to ensure that each side derives benefit from the association.

Do you see Brexit as an opportunity or a challenge for India’s IT sector within this partnership?

The UK-India trade is somewhere around $16-17 billion (annually), and I believe it grew by 15 per cent after the Brexit vote.

And, the UK and India have had a very useful relationship in IT. After all, let’s remember that the UK is the land of Newton, Maxwell and Alan Turing and has been a global leader in original thinking and creativity. This is what I believe will continue to make the UK attractive to most countries in the world, including India, Brexit or no Brexit.

Therefore, I believe that the UK will indeed continue to be a great opportunity for the Indian IT sector because it will continue to retain its global leadership in original thinking, innovation, invention and creativity.

A large number of Indian IT companies have benefited from building the IT infrastructure for the UK private sector, banks, government agencies like NHS [National Health Service] and even for city systems like the London Underground.

I believe they will continue to do so post-Brexit and Indian companies, being pretty good at enhancing the functionality and bringing about the required changes in the information systems, will be the best placed in adapting the UK systems to a post-Brexit environment.

I also believe that the UK is likely to participate in the upgrade of several cities in India to become Smart Cities and help Indians in leading digital applications into medicine, surgery and advanced education in the country.

This is obviously a clear opportunity for IT companies in the UK and for Indian companies because they  can work together to adapt to a post-Brexit scenario. And, we in India can benefit from the extraordinary capabilities of the UK companies in advanced technology to upgrade our cities and systems.

How has India’s IT revolution shaped up over recent times? What has been the impact of Digital India on the ground?

Digital India has had tremendous positive impact on the country. Financial inclusion has been accelerating. Direct benefit transfers have eliminated the middle man and, therefore, reduced corruption. Universal payment systems have become very popular and brought the power of online commerce to every home.

Several small towns have benefited from the jobs created by business processing and outsourcing opportunities. Education, medicine and governance applications are also fast picking up. The federal government has invested heavily in this digitalisation of income tax, GST [Goods and Services Tax] and other large-scale systems that benefit the whole country.

I would say India has started seeing the benefits of digitalisation and the Digital India initiative.

Is the full potential of technology being tapped for India’s economic growth agenda? What are some of the areas you feel technology can make more of an impact on?

The journey of leveraging the potential of digitalisation has started. The current central government is committed to it in a big way.

Some of the areas of focus in the future would be Smart Cities, public distribution systems, public governance systems, providing clean air, good quality education, nutrition and health, improving the efficiency of power and water systems, reducing the impact of climate change and in better forecasting the Monsoon.

These are some of the big ticket areas that will receive focus after the next election.