Can Trudeau give momentum to ties with India?

Can Trudeau give momentum to ties with India? 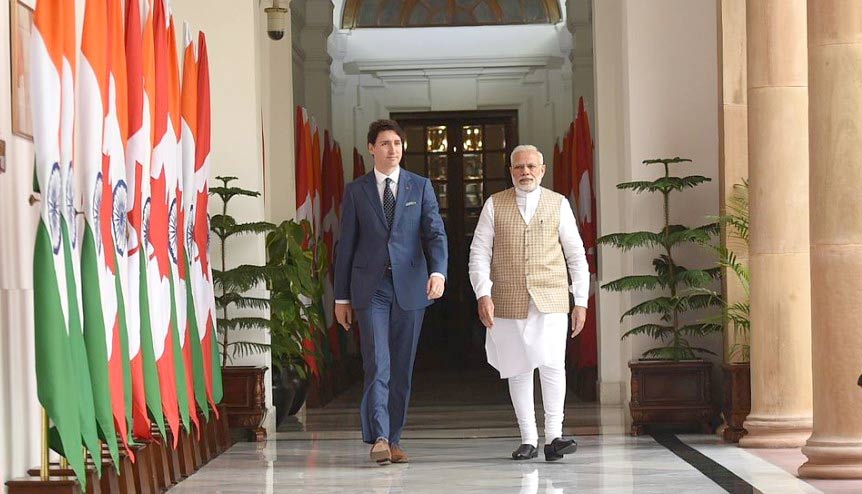 Closer trade ties and regular dialogues on a range of issues such as security, foreign policy, trade and investment, finance and energy are likely to lead to deeper bilateral ties but both sides will have to carefully handle potential areas of discord.

Of all the western democracies, India has one of the most ambivalent relationships with Canada. Despite the obvious areas of convergence on trade, investment, security and a shared geo-strategic worldview, the India-Canada relationship has yet to achieve anywhere close to its full potential.

Trudeau’s party retained power in the recently concluded general elections in Canada but this time, falling short of an outright majority.

During Trudeau’s visit to India last year, Indian Prime Minister Narendra Modi and he signaled their mutual determination to strengthen their economic and diplomatic partnership.

Canada is home to about 1.5 million people of Indian origin – that’s around 5 per cent of the country’s population. This provides a very strong people-to-people base on which to build the bilateral partnership. The two countries hold regular ministerial dialogues on foreign policy, trade, investment, finance and energy. In addition, officials of both countries meet regularly to discuss issues such as counter-terrorism, security, agriculture, education, science and technology.

Canada has provided support for India’s energy security through exports of conventional and nuclear energy machinery. It also provides India technological and financial support in areas such as technology for clean and renewable energy, urban and transportation infrastructure and education and skills training in a variety of areas.

Trade ties between the two countries, however, remain lackluster. Despite being the sixth and tenth largest economies in the world with a combined GDP of $4.5 trillion, bilateral trade between India and Canada is a paltry $9 billion.

That’s a minuscule 0.2 per cent of all goods and services produced in both countries. Compare that with Canada’s trade volume of almost $2 billion a day with the US and India’s $89-billion annual trade with the US and the difference is clear.

Both sides have made sporadic attempts in the past to push bilateral trade and investment to a higher growth trajectory but a mismatch of expectations and the domestic political compulsions of Trudeau’s administration have proved to be roadblocks. A trade deal between the two countries has been in the works for a decade but is nowhere near being concluded.

“I don’t think finalisation of the trade agreement will take place soon as negotiations are going on at a slow pace, but both sides are keen,” Canada’s Gujarati-origin Ambassador to India, Nadir Patel told the Press Trust of India in an interview recently.

A major sticking point is the insistence of the Canadian side on “progressive trade” – with strong emphasis on enforcing Canadian standards on environment, gender, human rights, labour rights and other such issues that India considers important for its own domestic agenda, but wholly extraneous to the bilateral economic dialogue.

Patel, however, exuded confidence that the volume of bilateral trade will triple over the next five years.

Magnet for Indians and Indian students

Then, the 1.5 million strong community of people of Indian origin in Canada, who contribute significantly to that country’s economic, cultural and academic life, is another component of closer ties between the two nations.

The lingering influence of Khalistani (Sikh seperatist) sympathisers on Trudeau’s government remains an area of concern. If Jagmeet Singh, leader of Canada’s third party, the New Democratic Party who has openly declared his support for Sikh separatists in Canada and Khalistan several times, does prop up Trudeau’s government it could skew the pitch for Indo-Canadian ties. Apart from his open support for the Khalistani cause, Singh has also been sharply critical of the Modi government’s removal of a controversial provision that treated India’s only majority muslim state differently from the rest of India.

Opportunity to reset the relationship

Modi has shown several times that he can steer difficult bilateral relationships towards areas of convergence to mutual bilateral benefit, the latest instance being with China. On his part, Trudeau has displayed maturity by declaring Canada’s unequivocal support for a strong and united India.

India’s downplaying of the irritants that beset bilateral ties offers Trudeau an opportunity to reset ties with New Delhi. Thus far, he has not allowed his domestic political compulsions to cloud his foreign policy – even though he has done little in practice to address India’s concerns.

Experts say this contradiction between his domestic and foreign agenda is likely to continue, but add that this may not become a major determinant of Ottawa’s behaviour towards India.

Given this and the determination of both countries to boost their trade and economic ties, coupled with a growing and vibrant diaspora community, the bilateral relationship between the countries should (hopefully) acquire some much needed momentum.