Skip to content
Building bonds with the CLMV region

Building bonds with the CLMV region

India’s bilateral trade with Cambodia, Laos, Myanmar and Vietnam has grown exponentially from $460 million in 2000 to almost $12 billion in 2014.

Till recently, they were considered the poor cousins of ASEAN’s more prosperous members, but the four countries – Cambodia, Laos, Myanmar and Vietnam – known by the acronym CLMV have emerged as the new cynosure of investors’ eyes –both for their economic potential as well as for their strategic value.

Recognising these advantages, Prime Minister Narendra Modi has reached out to this hitherto neglected sub-group within ASEAN. On a recent visit to Hanoi, Modi promised a $500-million line of credit for buying defence equipment from India. This follows a $100-million line of defence credit to Vietnam that it will use to buy patrol-cum-interceptor boats from Larsen & Toubro. New Delhi has not yet taken a decision on selling Brahmos missiles to Hanoi.

Then, the Indian government has also approved a Rs 500-crore project development fund to facilitate and increase the entry and presence of Indian companies in these countries, which have preferential access pacts with China, European Union and the US and so, can act as gateways for India Inc into these markets.

Among other things, this fund will help Indian companies secure inputs, raw materials and intermediate goods for the manufacturing of finished goods for domestic as well as international markets.

Bilateral trade with the CLMV nations has grown exponentially from $460 million in 2000 to almost $12 billion in 2014. They are all former centrally planned socialist economies that are transitioning to the market. They remain primarily agrarian economies with large gaps in their infrastructure and logistics chains as well as social infrastructure that offer massive opportunities for Indian (and foreign) companies. The advantages these countries offer are an abundant supply of raw materials and a low cost labour force.

As part of its outreach to the four CLMV countries, India is planning to extend the proposed trilateral highway connecting India’s north east to Thailand via Myanmar to these countries by 2018-19.

Of the CLMV countries, only Myanmar shares a border with India. Indian companies have invested about $225 million in Myanmar since it began opening up to foreign investment a few years ago.

But this is minuscule compared to the $3 billion invested by China. So, as in Africa, India is playing catch up with its northern neighbour. But Myanmar itself is keen on reducing its dependence on China and diversifying the sources of foreign investment.

This is a window of opportunity that India can leverage to increase its investments in Myanmar. The Tata Group, India’s largest conglomerate, recently inaugurated a new office in Myanmar. Group companies such as TCS, Tata Motors, Tata International and Tata Power have established a presence in this market and have plans to increase their presence across South East Asia, including in Vietnam.

Cambodia is attractive to India Inc because it is a low-wage country with quota-free access to major markets. The country offers great opportunities for the manufacture of bicycles, two-wheelers, industrial clothing, textiles, garments, and footwear.

Lao PDR’s economy has great potential in the mineral, hydropower and social sectors. Though small and featuring in the United Nation’s list of Least Developed Countries, its economy grew at 8.2 per cent in 2013. 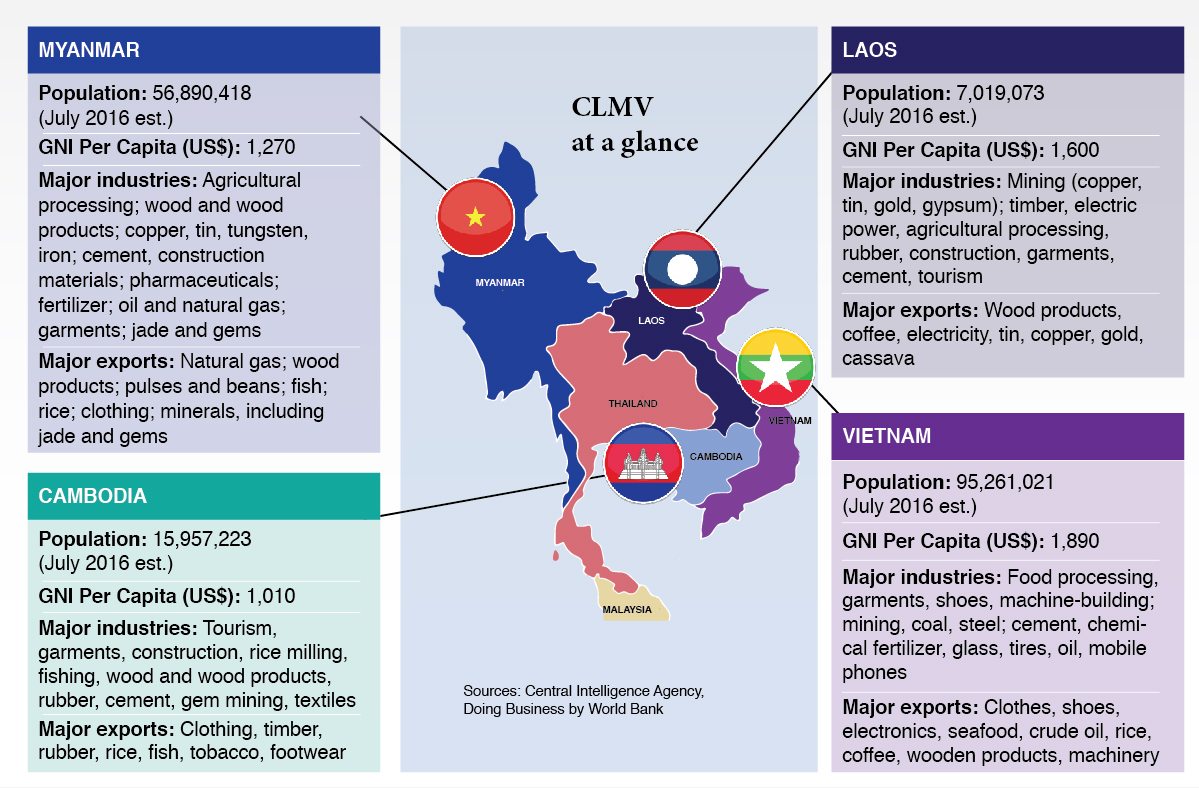