Skip to content
Bimstec: A viable alternative to SAARC

Bimstec: A viable alternative to SAARC

The cancellation of the 2016 SAARC summit in Islamabad, Pakistan, marks a major turning point in the geopolitical configurations in South Asia.

Bimstec wasn’t a term many people outside of government circles in Bangladesh, India, Myanmar, Sri Lanka, Thailand, Nepal and Bhutan were familiar till recently. Then, India, Bangladesh, Afghanistan, Bhutan and Sri Lanka decided to pull out of the SAARC Summit in Islamabad citing Pakistan’s continuing support for and export of terrorist groups as part of its state policy.

Following this, India decided to raise the profile of Bimstec, a regional grouping of countries around the Bay of Bengal which pointedly excludes Pakistan, to overcome Islamabad’s policy of blocking all regional cooperation efforts by hosting a summit of these nations alongside the BRICS summit in Goa.

Islamabad had blocked a regional connectivity project at the last SAARC Summit in Kathmandu. If these countries find regional cooperation not progressing as desired under SAARC, they will look at other blocs such as the Bay of Bengal Initiative for Multi-Sectoral Technical and Economic Cooperation to ensure such collaboration, he added.
SAARC, the original grouping of South Asian nations, has been caught up in Indo-Pakistani rivalry, with Islamabad intent on turning it into a moribund body that has not been able to fulfil its mandate. Given this background, members as well as experts and analysts have, for many years, questioned the future of SAARC and its efficacy in addressing the issues faced by member states who are among the poorest in the world.

Bimstec has been around since 1997 but has held just three summits over the last 19 years. Despite this less than stellar record, India is now taking the initiative to bring this regional bloc to life. New Delhi is pushing for a regional trade pact under Bimstec based on “complementarities’ among the seven-nation grouping.

That, however, may take some time. Though these countries did sign a framework agreement to establish a free trade area in 2004, it is yet to be operationalised. The difficulties in arriving at a trade pact that is fair to all the countries is there for all to see. India and Thailand are far ahead of the rest in almost all indicators of economic strength and there is genuine and well founded fear in the weaker states that a free trade area will wipe out their local industries and create social unrest.

But many analysts are hopeful that Bimstec is an idea whose time has come. With SAARC in a deep coma, at least for the foreseeable future, they are optimistic that the leaders of Bimstec will be able to thrash out the issues that are holding up full operationalisation of the pact. 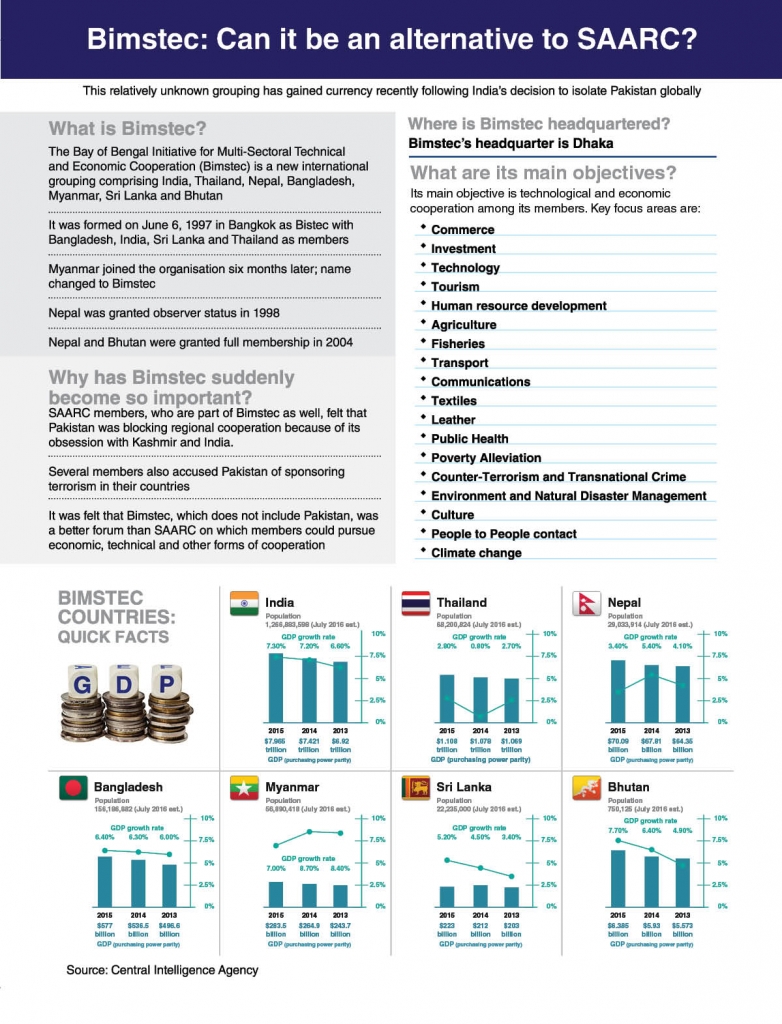