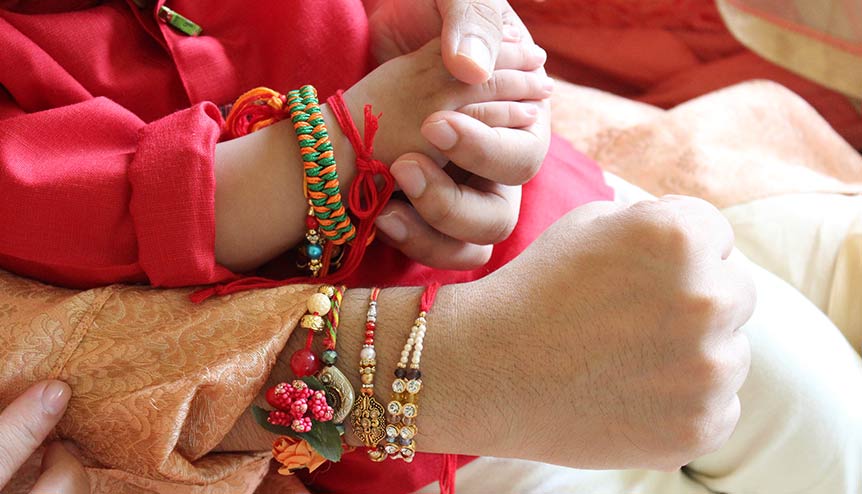 ‘iGlobal’ writer Vidhu Sharma was recently in conversation with Vibhuti Patel, Editor-in-Chief of an upcoming anthology on British Hindu feminism and womanhood ‘Beyond the Bindi’.

The conversation took place with a live audience on Instagram to mark Raksha Bandhan on August 3 – its meaning, its relevance and its evolution. Here Vidhu reflects on some of the highlights from the discussion.

Questions were sent in by the public, querying the history of the tradition behind Raksha Bandhan and its significance today.

“Are rakhis exclusive to sisters and brothers?”

“Why is there a narrative of this celebration being oppressive towards women?”

“What is your take on tying rakhis to receive money or gifts? Why is this expected?”

“Does Raksha Bandhan mean anything in the modern information age?”

We exchanged stories about Raksha Bandhan; of Lord Bali and Goddess Lakshmi, Yama and Yamuna, and Draupadi and Krishna.

Although the tradition is popularly celebrated between brothers and sisters around the world, it is believed that the first Rakhi to have been tied over 3,000 years ago was between a husband and wife.

Vibhuti shared a long-standing family tradition whereby her paternal aunt sends a Rakhi to her mother as well as her father every year. Carrying the torch on, Vibhuti now sends a Rakhi to her brother’s partner every August as a symbol of protection and equal treatment.

Many youngsters in the West are giving into the concerning notion that Raksha Bandhan is a patriarchal festival propagating that women are weak, oppressed and must rely on men for protection. On the contrary, Vibhuti and I discussed how we were brought up to understand the day to be a celebration of female strength. ‘Shakti’ (energy/strength) is inherently feminine in the Hindu tradition, and is believed to be responsible for the creation, maintenance and destruction of the entire universe.

In the ‘Mahabharata’, Kunti tied a mauli (thread) on Abhimanyu’s right hand as a shield of defence. It was not until a mouse had nibbled through the thread that opposing warriors were able to defeat Abhimanyu on the battlefield. 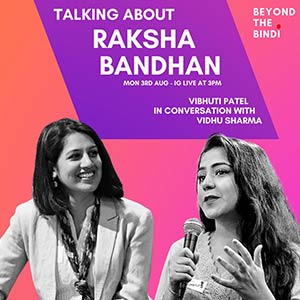 Much like many festivals around the world, gifts have become a big part of the festival of Raksha Bandhan. Every year, sisters tease brothers with never ending wish-lists and brothers complain about the dread of becoming bankrupt.

Vibhuti and I discussed whether or not we thought this notion of gift giving was ever part of the spirit and sentiment of the festival. We agreed that while there may have been a tradition to offer a token of appreciation in exchange for a sister’s vow of protection, it does not seem sustainable or in alignment with Hindu philosophy to advocate for such superfluous materialism.

Just as one might return a neighbour’s plate to them bearing fruits and sweets, so as not to arrive empty-handed, a sister’s act of providing ‘raksha’ (protection) is to be met with her brother’s acknowledgment and appreciation.

By day, Vibhuti leads the Bioscience Impact Team at the University of Cambridge.

Looking beyond the symbolism of the festival, we also discussed the scientific meaning behind Raksha Bandhan, which falls on the last full-moon day of the Hindu lunar month of Sravana.

According to the Ayurvedic ‘Tridosha Theory’, our bodies constitute of 72,000 nerves, which all pass through the wrist, and three dosha (faults) – vaat (wind), pitt (bile) and kaptha (phlegm). When these are unstable, it can cause discomfort in the body. When a small weight is placed on the wrist, it is understood that the nerve centres around this area can be immediately activated, thus when a mauli (thread) is tied around the wrist, it can help improve the blood circulation and rebalance the tridosha (three faults).

‘Beyond the Bindi’ is a discussion platform for ideas surrounding British Hindu feminism and womanhood. This week’s conversation about Raksha Bandhan was the start of a series of live conversations engaging members of the public with perspectives of womanhood that are believed to have not previously been sought.

*Info: ‘Beyond the Bindi’ is published with Tattva Press next International Women’s Day – March 8, 2021. Catch up on the Raksha Bandhan conversation here.

About the Author: Vidhu Sharma