The trade and investment relationship between India and Australia has strengthened over the past few years. Bilateral trade of goods and services has grown from $15.4 billion in 2014 to $23.3 billion in 2018.

India is a notable exporter of goods. Its total exports of goods to the world were $322.5 billion in 2018. Key commodities exported by India include petroleum products, gems and jewellery, pharmaceutical products, rice, prawns and shrimps, meat and passenger vehicles. Cost-effective manufacturing, presence of large oil refineries, highly competitive pharmaceutical and automotive industries and high quality of produce has contributed to India’s significant presence in the export market. 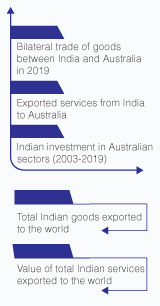 India’s exports of services to Australia have witnessed a high growth of 12 per cent to reach $5.5 billion in 2018 from $1.1 billion in 2014. However, there is still large room for growth as India accounts for only 2.7 per cent of Australia’s total service imports. In a few sectors such as business services and travel services, India’s export strength is well aligned with Australia’s import needs. In addition, India is a globally renowned Information Technology service provider. However, this sector has a low share of merely 10 per cent in Australia’s software service imports. There is, thus, substantial potential for India to increase the provision of services to Australia.

In addition to trade, Australia’s abundance of natural resources has made it an ideal destination for investment from India’s perspective. India invested $9.9 billion in Australia from 2003 to 2019 in sectors such as renewable energy, coal, oil & gas, software services, financial services and mining. A few notable investments announced include investment by Sterling and Wilson to construct a 500 MW solar plant ($459 million), Adani Enterprises to develop a solar energy farm in Whyalla ($141 million) and opening of innovation hubs by Infosys ($114 million).

Australia has also shown an active interest in investing in India. India’s growing population and increasing urbanisation are expected to create additional demands in sectors such as agribusiness, mining, infrastructure, manufacturing, education and technology. One of Australia’s largest investments in the recent past includes a $1-billion investment by Australian Super, Australia’s largest superannuation fund to the National Investment and Infrastructure Fund (NIIF), an infra-centric wealth fund set up by the Government of India.

India can thus explore investment opportunities in the Australian market to manage its domestic resource requirements or to establish Australia as a base to export products/services to the world. India can also be promoted as an attractive destination for investment to Australia, and Australia can play an active role in India’s nation-building plans.

About the Author: Anil Wadhwa