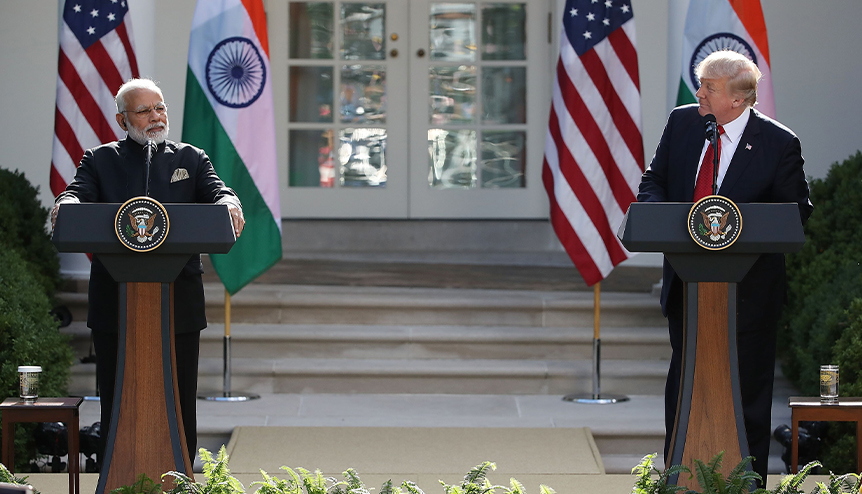 In pursuit of its America First policy, the Donald Trump administration is turning the trade screws on India.

Just when it looked like India and the US had buried their historical differences and overcome decades of mutual distrust, their bilateral trade relationship, arguably the bedrock on which the rest of the geo-strategic edifice rests, is developing large cracks.

First came the much tighter norms for issuing H1B visas, the main entry pass used by Indian IT companies to relocate IT professionals to the US, and the ban on work permits for the spouses of such visa holders. Then, following prolonged complaints by the US President against alleged high Indian import tariffs on US goods – most notably Harley Davidson motorbikes, of which only a few hundred are imported into India – Washington decided to deny some Indian goods duty-free access to the US market under the Generalised System of Preferences (GSP), which mandates developed nations to offer this concession to developing ones.

Now, the US wants to strip India (and China) of the developing world status on the grounds that it is the world’s fastest (and second fastest) growing economy.

This sniping comes on the back of Trump’s long-held grudge at India’s trade surplus with the US and its allegedly loose intellectual property rights (IPR) regime that enables its generics drug industry roll out cut-price versions of off-patent drugs originally developed by US drug majors.

Now, consider these: The US has just agreed to supply India with six Westinghouse AP-1000 nuclear reactors for a power station being planned in the south Indian state of Andhra Pradesh.

This will involve very sensitive technology that countries which possess it transfer only to their most trusted allies.

Then, a few days after India became only the fourth country in the world to declare its anti-satellite weapons capacity, the Pentagon defended New Delhi’s right to develop the capacity to defend itself against attacks from space.

This reaction, coming from the US Defence Department, showed the distance the two countries had travelled since the days when such a test would have been greeted with unbridled hostility and opprobrium.

The US is also likely to waive sanctions on India for acquiring the Russian S-400 Triumf missile system.

In a difficult place

The convergence of strategic interests, most notably on global terrorism, the rise of China and the importance of maintaining peace and stability in the Indo-Pacific Region sits uneasily with the series of ever-increasing spats on issues of bilateral trade.

The leaderships of the two countries have worked hard over the last couple of decades to overcome the baggage of the previous decades when India and the US invariably found each other in opposite corners on almost every issue of mutual interest.

While the quite unnecessary muscle flexing on trade by the Trump administration is not yet threatening to undo the gains of the last 20 years, it is reverting Indo-US ties to a zero-sum game that serves neither side well, especially given the almost total alignment of the world views of the two countries on the most important foreign policy and strategic issues facing them.

To put the record straight, none of the US threats as yet have translated into punitive actions that can hurt India. The US administration has to notify the end of GSP benefits within 60 days of announcing it.

In a strong sign of the broad bipartisan support that India enjoys in Capitol Hill, two Senators from the Republican Party and Democratic Party have written to the US Trade Representative Robert Lighthizer to defer the end of GSP benefits till the end of India’s ongoing general elections in the light of the importance of India to the US.

India in wait and watch mode

India, on its part, has refrained from any knee-jerk reactions to the US’s ham fisted attempts to make India toe its line. Though it has lined up its own list of imports from the US on which it will impose retaliatory tariffs in case the US does go ahead and carries out its threat, it has deferred their notification no less than six times to give negotiations a chance.

But Trump’s go-for-broke approach may be blocking possible avenues for a negotiated settlement of the trade dispute.

In a strategy that harks back to earlier times of unequal trade treaties, the US has reportedly sought tariff concessions worth as much as $3.2 billion on its IT and medical devices exports to India in return for restoring GSP benefits of between $190 million and $240 million.

Then, Trump’s complaints on the balance of trade between the two countries also seems unjustified when one considers that India’s surplus has been falling consistently over the years – from $24.4 billion in 2016 to $22.3 billion in 2017 to $21.3 billion last year. In fact, India is the only major trade partner with which the US’s trade deficit has shrunk this consistently.

Many analysts are, therefore, of the opinion that Trump’s real targets are elsewhere – from India’s new rules for e-commerce firms and data localisation, which have affected US firms like Amazon, Walmart and Visa and recent Indian caps on the prices of medical devices that have hit large US corporations.

Then, the Indian Air Force (IAF) is still on the lookout for more than 100 combat aircraft to replace its ageing fleet of Russian-made MiGs. Two US planes, Lockheed Martin’s F-16 and Boeing’s F-18 are in the fray along with fighters from Western Europe and Russia.

The recent hard ball on trade, these analysts feel, could be a ploy to skew India’s options in favour of the American planes. It may be mentioned that this IAF order will be the largest single order for fighter jets in decades and will mean a real bonanza for whichever company or consortium that bags it.

Pushing India hard may be counterproductive

The US President’s advisors will do well to caution him that Indian Prime Minister Narendra Modi, too, is very adept at looking people in the eye and bargaining hard. A game of chicken, then, is likely to be mutually detrimental and could set back what many people all over the world have described as potentially, the defining relationship of the 21st century.

Washington should understand that the recent measures announced by New Delhi on e-commerce and data localisation are driven by its imperative of ensuring a level playing field and creating jobs for the millions of youth who are entering the work force every year and to ensure the security of information of Indian nationals. And the issue of price caps on medical devices is critically linked to Modi’s promise of delivering affordable healthcare to India’s poor.

Time to return to the negotiating table

India’s elections will be over by May 19 and the results will be known four days later. All opinion polls suggest that Modi will return to power.

Keeping this continuity in mind, both sides can redouble efforts to find a mutually acceptable solution to the outstanding trade issues that are threatening to derail what is otherwise blossoming into a very positive relationship for both sides.