A year of wholesale clean-ups 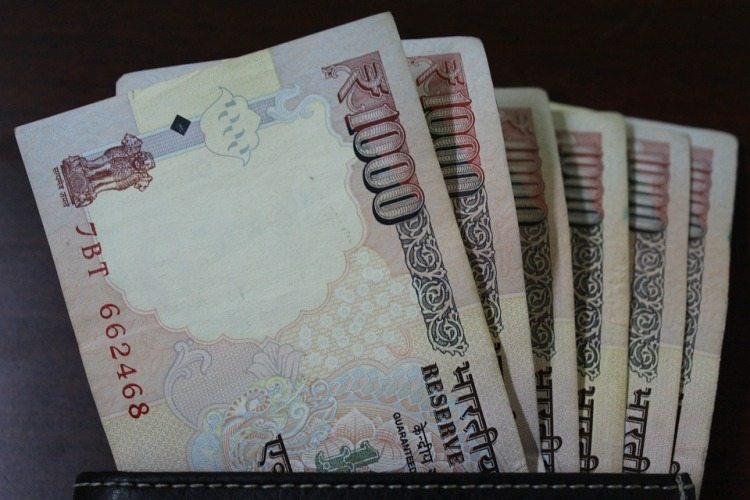 As 2017 draws to a close, we look at a number of steps taken by the Narendra Modi government to clean up processes and lay out a roadmap for faster growth.

It is never a wise thing to look back upon, and label a year when there’s still half a month to go for the New Year. Having got that caveat aside, it would be fair to call 2017 the year of clean-ups – when the Narendra Modi government decided to clean up the choke points that were hindering the economy from moving into a higher, more robust growth trajectory in the years to come.

For the purpose of this year-end report, India Incorporated looks back at the following five major clean-up acts undertaken by the government:

Individually, each of them constitutes a significant reform initiative. Taken together, they signal a determination to re-engineer and re-imagine the basic structure of the economy.

The process has not been entirely smooth – nothing as ambitious as these programmes can be painless – but the good news is that the economy has started showing signs of responding positively. Note the second quarter growth rate of 6.3 per cent – the first rebound after five straight quarters of slowdown.

At the stroke of the midnight hour on the intervening night of June 30 and July 1, while the world slept, much of India was wide awake, watching President Pranab Mukherjee and Prime Minister Narendra Modi formally launch the much awaited Goods and Service Tax (GST). 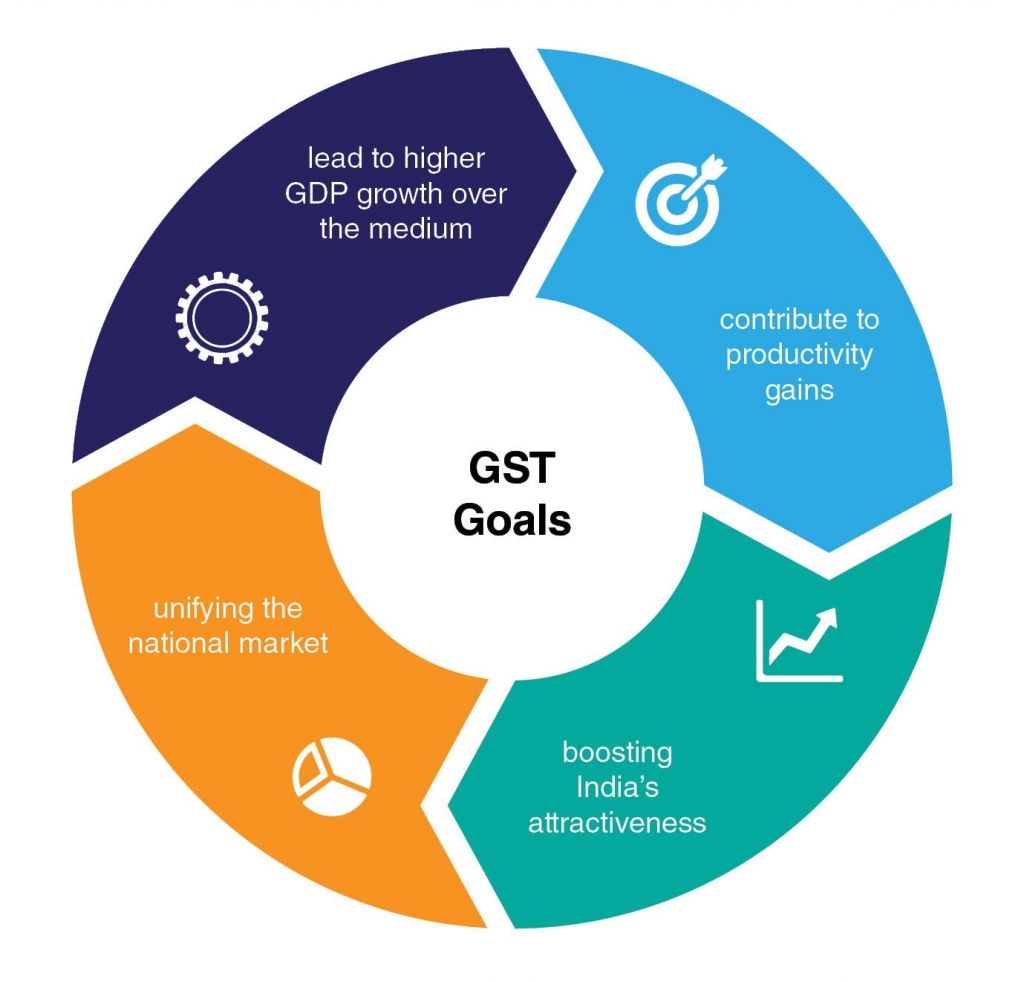 At the stroke of the midnight hour, India was transformed – from 29 discrete markets each with its own labyrinthine tax laws to one common market. A long held dream – of one nation, one tax – shared by every political party and many experts became a reality on the intervening night of June 30 and July 1 this year when as many as 17 taxes and 23 central and state cesses were merged into a single national levy called the Goods and Services Tax. At one go, India was transformed – from 29 discrete markets each with a plethora of local taxes and levies into one common market.

Sure, the rollout process hasn’t been entirely without glitches. Many companies and several traders’ bodies are still trying to figure out the full impact of the new tax on their fortunes and some businesses have been adversely impacted. But this was to be expected. The government has proved itself as being alive to the problems being faced by the business community and has already taken several measures to mitigate and resolve the issues involved with the rollout of GST.

For example, it recently cut the rates of about 212 items in the various tax slabs, including 180 items in the highest 28 per cent bracket. Other measures are also on the anvil to sort out the remaining issues.

Finance Minister Arun Jaitley has been holding regular meetings with his counterparts in the states to sort out the teething troubles faced by this new tax and Finance Ministry mandarin Hasmukh Adhia has said he expects all outstanding issues related to GST to be resolved over the next few quarters.

Despite the initial problems, the assumptions behind the launch of GST still hold.

US ratings agency Moody’s Investors Service said the new tax regime will be positive for the country’s credit profile as it will increase the government’s revenues through improved tax compliance.

“It will support higher government revenue generation through improved tax compliance and administration. Both will be positive for India’s credit profile, which is constrained by a relatively low revenue base,” a statement released by Moody’s said.

Moody’s expects GST to contribute to productivity gains and lead to higher GDP growth over the medium term by improving the ease of doing business, unifying the national market and boosting India’s attractiveness as a foreign investment destination. This is largely in line with the expectations of experts and analysts who have forecast a 1.5-2.0 percentage point rise in GDP growth rates over the next two-three years as a result of GST.

A CRISIL Research report estimates that “the rollout of GST will bring down the logistics costs of companies engaged in the production of non-bulk goods by as much as 20 per cent. Savings will accrue as a result of gradual phasing out of the central sales tax, consolidation of warehouse space, faster transit of goods since local taxes will be subsumed into the GST and as state level check posts will be dismantled.”

The combined effect of these measures as well as the resultant improvement in the ease of doing business will take GDP growth higher. Billionaire investor Rakesh Jhunjhunwala has predicted, in an interview to a leading financial daily, India’s GDP growth will touch double digits by 2019-20.

Technically, demonetisation took place in 2016, but its effects were felt most strongly in 2017. And now that the pain of going cashless is behind us, the gains are slowly beginning to show. 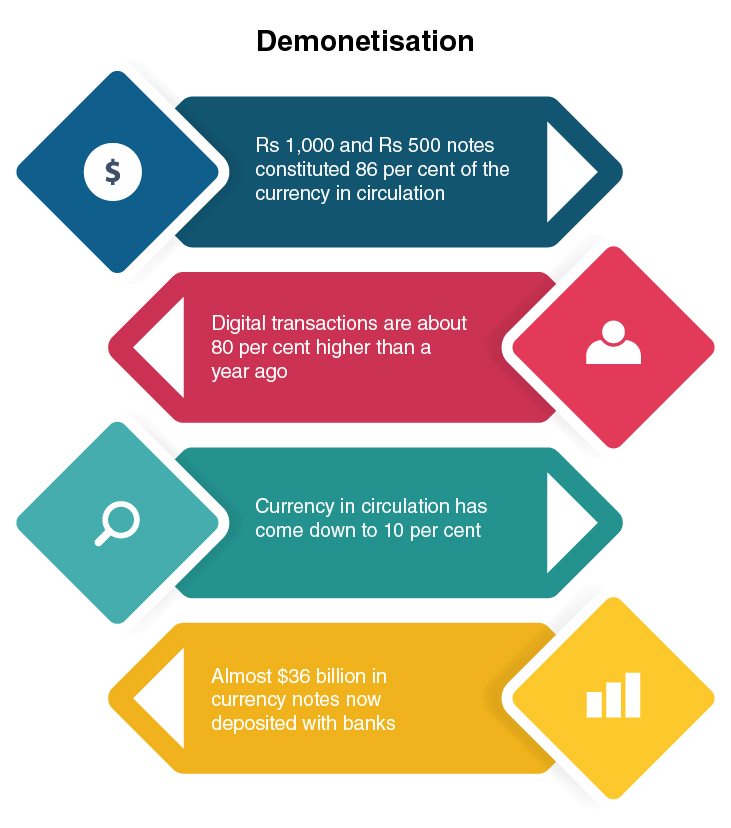 The Prime Minister’s shock announcement on November 8, 2016 that his government was withdrawing all Rs 1,000 and Rs 500 notes, constituting 86 per cent of the currency in circulation in India, as legal tender was met with shock and consternation in some business and political circles. There were long queues at banks as people lined up to withdraw money up to the permissible limit while the Reserve Bank of India (RBI) set about replenishing the country’s currency stocks with replacement notes.

A year later, the net effect of demonetisation is becoming visible. Unaccounted or black money, which has been the bane of the Indian economy, has been partially controlled. This is evident from the fact that currency in circulation, which was at a high of 12-13 per cent a year ago, compared to 4-5 per cent in developed economies, is down to about 10 per cent, a drop of more than 2 percentage points, according to figures released by RBI.

Result: as much as $36 billion in currency notes that were earlier in circulation, is now deposited with banks.

The results are tangible: real estate prices, which were earlier propped up with unaccounted cash flows, have corrected by 10-20 per cent in most major cities, resulting in a direct benefit to the ordinary Indian, who now finds housing more affordable than before.

The government had brought in an Insolvency and Bankruptcy Code to ease the process for creditors to recover their dues from borrowers. Under this new law, a defaulting corporate borrower would have to resolve its outstanding loans within 180 days – extendable to 270 days in exceptional but clearly defined circumstances – by way of bringing in a new promoter and fresh capital or face winding up and the sale of assets.

This issue was important as many of India’s largest companies had taken hefty loans from banks and then defaulted in repayments, resulting in a major bad loan crisis in the Indian banking system that has choked credit supply in the Indian economy.  Till the enactment of this new code, India’s antiquated banking system had been going around in circles trying to recover loans from delinquent corporate borrowers.

The extent of the problem: as much as 10 per cent of all outstanding loans.

As a first step, banks have seized 12 top companies that account for almost a quarter of all outstanding bad loans and have set in process measures to sell them to new promoters.

But a loophole remained: the law as it was worded did not disallow existing promoters from buying back their companies – after forcing lenders to take large haircuts.

This was a moral hazard that no democratic government could afford. Hence, the law has been amended to plug this loophole and bar promoters who have been tagged as wilful defaulters – defined as those who have not repaid loans despite having the capacity to do so – and those who have siphoned money out of their companies.

This is expected to bring Indian insolvency resolution laws at par with the best in the world and improve India’s rank in the World Bank’s Ease of Doing Business Index.

To tackle the problem of bad loans in the banking sector, which has severely hampered its ability to lend funds for fresh investments, the government has announced a $35 billion programme to recapitalise public sector banks.

The goal: stimulate the flow of credit to spur private investment.

Of the promised amount, about 65 per cent will be financed through the sale of recapitalisation bonds while the remaining $12 billion will come via budgetary allocations and market operations.

Indian banks have a stressed asset portfolio of about $150 billion, of which more than 75 per cent have already turned delinquent.

Further details of the scheme have not yet been announced.

The issue of recapitalisation of bonds will not affect the government’s fiscal deficit target. According to Arvind Subramanian, Chief Economic Adviser to the Finance Ministry, International Monetary Fund (IMF) treats such recaps as “below the line”, meaning it is not part of the fiscal deficit.

“But under our own accounting practices, it is above the line and part of the deficit. The reason it is below the line is because when you recapitalise, you don’t directly add to the demand for goods and services, which is what the deficit measures. So in that sense it is not going to be inflationary, et cetera et cetera,” he said.

According to RBI figures, the banking sector’s credit growth stood at 7 per cent year-on-year. This is expected to improve following the initiation of this new programme.

In December, the government announced several measures to revive foreign trade and ease disruptions caused by the implementation of the Goods and Services Tax (GST).

The goal is multi-fold: increase exports, provide a boost to employment generation in sectors such as leather and leather products, garments, gems and jewellery, handicrafts and agriculture that are highly labour intensive and kick-start GDP growth with a ground-up approach.

The government has raised incentives under the Merchandise Exports from India Scheme by 2 per cent to exports from labour and MSME dominated sectors such as gems and jewellery, leather and leather products, carpets and agriculture. It had earlier done the same for ready-made garment exports.

The services sector, which makes up 60 per cent of the Indian economy and accounts for a large volume of exports has also been given a similar 2 per cent increase in incentives.

The ministry also launched a new initiative to use trade analytics to identify new markets for its products and new products for existing markets.

India’s Foreign Trade Policy (FTP) had proposed a hefty rise in the country’s merchandise and services exports to $900 billion by 2019-20. But sluggish global conditions, a bad loan crisis plaguing domestic banks and, over the last few months, teething troubles faced by GST, have combined to slow down export growth.

The new incentives announced for boosting exports from labour intensive and services sectors under the revised FTP will cost the government an additional $1.3 billion.

While the incentives are expected to provide an immediate palliative to exporters, the government has addressed longer term structural issues faced by exporters by creating an enabling eco-system to shore up their competitiveness and productivity by streamlining the supply chain by ironing out the glitches in the implantation of the GST and also by improving the ease of doing business within the country.

It will do so by setting up a single point of contact at the Directorate General of Foreign Trade for exporters and importers.

The revised policy also increases the validity period of duty-free credit scrips to 24 months from 18 months to enhance their utility under the GST regime and also removes GST on these scrips.

The review aims to promote exports by simplifying processes, boosting support to high-employment sectors and leveraging the benefits of GST, apart from helping double farmers’ income, India’s Commerce Minister Prabhu said and assured exporters that the policy will be constantly reviewed.

“We do not need to wait two-three years to make changes,” he said.