Skip to content
A step forward in India-Japan relations 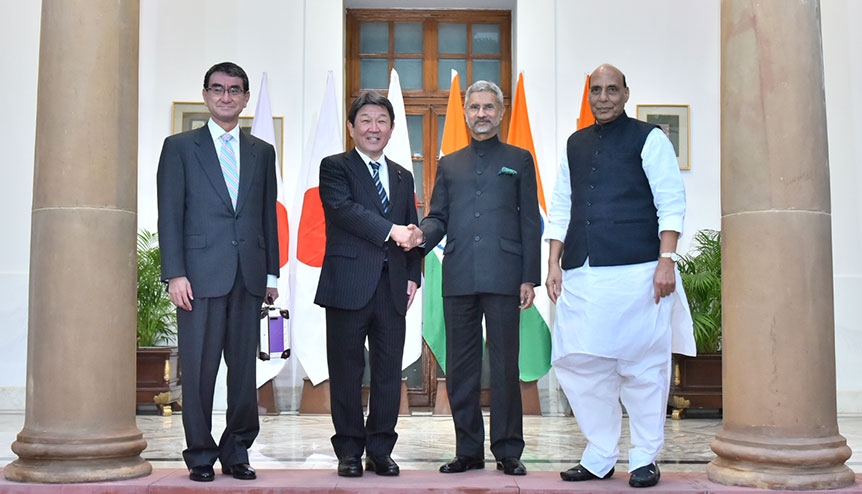 The recent 2+2 dialogue between India and Japan aimed to push their relationship beyond bilateral trade and open up pathways for cooperation in defence and strategy.

India and Japan concluded their first ever 2+2 dialogue late last month, yet another indication of the increasingly close ties between the two nations. The only other country India has held a 2+2 ministerial dialogue, which is seen as an upgrade from any meeting at a secretarial level, is the US.

The dialogue was led by Defence Minister Rajnath Singh and Foreign Minister S. Jaishankar from the Indian side and the counterparts from Japan were Toshimitsu Motegi for foreign affairs and Taro Kono for defence. It provided an opportunity for the two sides to review the status and exchange further views on strengthening defence and security cooperation between the two countries. The key element was to give a stronger spine to the existing India-Japan Special Strategic and Global Partnership. Views were also exchanged on the situation in the Indo-Pacific region and respective efforts under India’s ‘Act East Policy’ and Japan’s ‘Free and Open Indo-Pacific Vision’ for achieving a better future for the people of the two countries and the region.

That India must have a 2+2 with the US is rather obvious. Both are large democracies with the US is the largest economy in the world. It is also the second-largest trading partner with India, behind only China, and relations between the two countries have been on an upswing for much of the last decade.

With Japan, it is less obvious even though the two nations share healthy historical bilateral ties. India was one of the few countries to not participate in the 1951 San Francisco Peace Conference presided over ironically by the US and would negotiate a separate peace treaty with the island nation in the aftermath of World War II. This diplomatic show of honour has been duly repaid by Japan by generous loan and aid – India has been one of the biggest beneficiaries of Japanese development aid for several decades and billions of yen have translated into projects of critical importance for India including the Delhi Metro and the upcoming $90-billion New Delhi Mumbai Industrial Corridor.

Yet, the two nations have a bilateral trade of just over $15 billion (2017-18), which puts Japan well outside the top 10 countries that conduct most business with India. The main reason then for the proximity between the two nations at a diplomatic level is the singular world view they share, particularly on free and fair usage of the ocean and the threat of a common enemy in China. 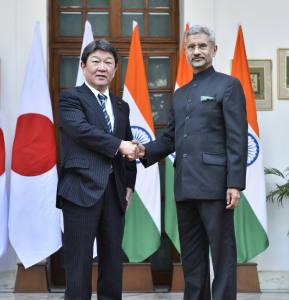 “More broadly, the dialogue has been driven by the mutual desire to frame an Asia that is not dominated by a single country and to see the emergence of a multipolar Indo-Pacific that is free, open, and inclusive,” writes Dr Rajeshwari Pillai Rajagopalan, distinguished fellow and head of Nuclear and Space Policy Initiative at Observer Research Foundation. “India and Japan have both approached the emerging Asian strategic framework with that goal in mind and both want an inclusive approach in the region. Both see China’s approach in the region as being exclusivist. There is a clear clash between these two visions of the region.”

In the last few decades, both countries have moved much closer in defence collaboration. All three military branches – land, air and naval, are engaged in joint exercises, including the Dharma Guardian land exercise, the Shinyuu Maitri aerial exercise, and the Japan-India Maritime Exercise. Additionally, the annual trilateral Malabar exercise, which also includes the United States, gives a vision where the three big nations can combine militarily to counter the Chinese threat in the region. A joint working group to collaborate on the production of unmanned ground vehicles has also been set up.

There is scope to expand it further and the dialogue concentrated itself on these areas. The sale of Japan’s ShinMaywa US-2 amphibious aircraft for the Indian Navy that has been stuck for many years is one such topic. India had reservations on the price of the aircrafts but with Japan agreeing to manufacture 30 per cent of it in India, something that will boost India’s defence manufacturing industry, a breakthrough is likely.

The ministers met in the run up to the annual summit meeting between Indian prime minister Narendra Modi and Japanese Premier Shinzo Abe later this month.

Discussions were held to finalise the military logistics agreement called the acquisition and cross-servicing agreement (ACSA) so it can be signed during Abe’s visit. This agreement expands the strategic reach and influence of both the militaries with Japan gaining access to Indian facilities in the Andaman and Nicobar Islands while India gains access to Japan’s naval facility in Djibouti.

With the next 2+2 meeting scheduled to be held in Tokyo, it may become a regular fixture in the calendar of diplomatic meetings between the two nations. More engagement only means better progress. Should the four ministers also develop the camaraderie displayed by their two bosses, it would be an added bonus.