Skip to content
A Statue of Unity for a modern India

A Statue of Unity for a modern India 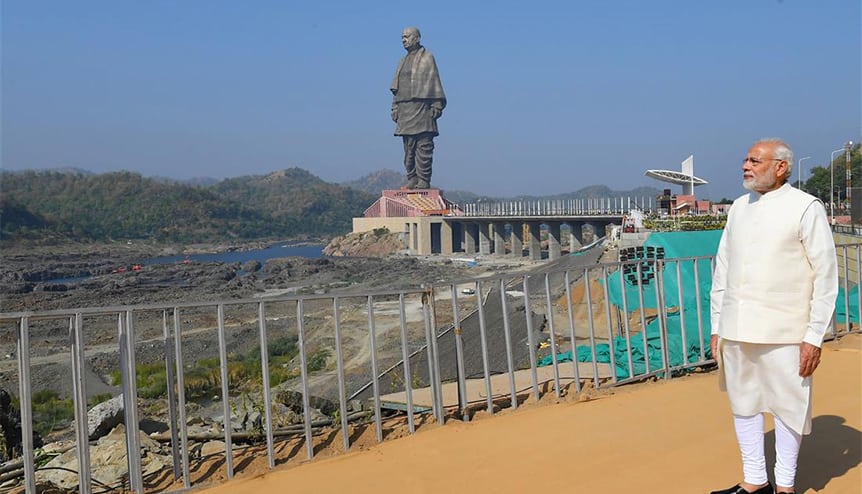 It is time the world got to learn a little more about the contribution of Sardar Patel in setting India on the path of today’s economic growth trajectory, writes India Inc. Founder & CEO Manoj Ladwa.

India is the toast of global investors. A 1.3 billion-strong nation with a $2.5 trillion economy growing at more than 7 per annum, the fastest growth rate among major economies, is drawing foreign investments by the bucketful.

It could have been a very different – and markedly less rosy story – but for the efforts of one man.

The Narendra Modi government has erected the world’s tallest statue located on an island on the Narmada River in Gujarat. It has cost an estimated Rs 3,000 crore ($410 million). This seems to have raised the hackles of a section of political and social activists in India, who allege that this sum could have been better utilised on providing food and other amenities to the poor.

That’s a fallacious argument, if there ever was one.

The statue, apart from being a fitting tribute to the real creator of unified India, is also a sign of India’s growing self-confidence. The height of the statue has attracted worldwide attention and focused the arclights more pointedly at the India story, of which a vast majority of Indians are justifiably proud.

The real issue is that turning the spotlight on Patel and highlighting his achievements is making a section of the old establishment nervous. Their carefully choreographed tale of one family’s contribution to the development of India, to the exclusion of all others, is slowly being exposed.

To honour Patel is not to belittle the roles played by other stalwarts of the freedom movement and the early years of Indian nation building.

It is an undeniable fact that in the 70 years since Independence, Patel’s leading role in unifying India, his vision of One India, One Nation, One Peoples has been all but forgotten. The generation that was around in 1947 and the generation that take pride in the India of today are only now finding out about his greatness.

The Statue of Unity, unveiled by Indian Prime Minister Narendra Modi on October 31, Patel’s birth anniversary, is a long delayed tribute to the real unifier of India.

Let us keep in mind that had India not been one nation today but a collection of several small principalities, each with its own rulers, laws and practices, the magical story of transformation currently underway would not have been unfolding before our eyes.

There are reports that more than 125,000 people have visited the statue over the last fortnight. So, its unveiling is also attracting tourist footfalls and generating a vibrant local economy, business opportunities and employment. This is yet another benefit that is accruing to the people of the region.

The Modi government’s unveiling of the Statue of Unity in the memory of Sardar Patel only honours one of the brightest stars of that pantheon of greats. It is time the world also learnt that the country which is leading the global growth momentum at present would not have existed in its current form but for this great son of India.