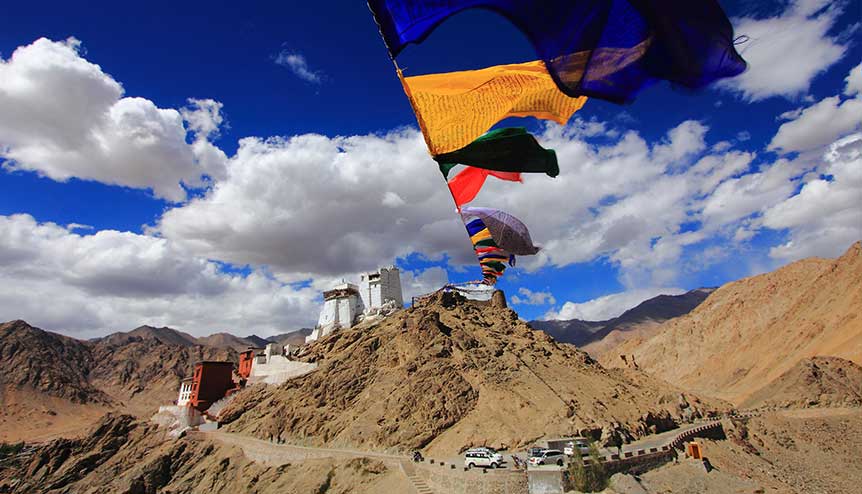 With the build-up of Chinese defence assets along the Tibetan plateau, the larger power game between the two largest economies of the world is in full play – and India has a massive stake in maintaining strategic equilibrium.

The renewed focus on the Himalayas in recent weeks goes on to show how the region has become the new theatre for geopolitical supremacy – it is today what central Asia was to the US and USSR a few decades back. With India swiftly moving to reassess its strategic interest in the area and to enforce new reprisals to contain Chinese ambitions, it has also become a centre of global attention.

In the first part of this two part series, we looked at the strategic importance of this region in detail. In this column, we analyse how this region is influencing regional and multilateral grouping.

Related stories: The Himalayas emerge as the new theatre for geopolitical supremacy

One of the fallouts of the recent India-China stand-off is likely to be visible in the reorganisation of regional groupings, say diplomats and analysts.

One of the demonstrated priorities of US President Donald Trump has been to strengthen US security arrangements through partnership and alliance with nearly all nations bordering China – including the QUAD – to establish an “Arc of Democracy” that covers a wide swathe of nations from central Asia, Mongolia and the Korean peninsula to strategic alliances with almost all nations in East and Southeast Asia.

One corollary of this that feeds into India’s foreign policy objectives is an increased Indian investment in Afghanistan, along with a more pro-active role as a regional partner whether in Myanmar, Bangladesh or the Himalayas. Under a reinvigorated foreign policy propagated by Modi, India has been able to achieve exactly that, even while delicately rebuffing US suggestions to mediate between New Delhi and Pakistan or China on bilateral issues.

From QUAD to D10: Groupings against China

President Trump’s great personal equation with Prime Minister Modi – he never fails to call him a really good friend – has also helped reimagine the possibilities of global diplomacy vis-à-vis the region. Trump postponed the G7 summit scheduled in June and plans to invite Australia, India, Russia and South Korea. Amid the growing bonhomie, Britain has proposed a grouping that comprises G7 plus Australia, India and South Korea – making it 10 nations of democracy or the D10. The underlying idea is simple: to effectively combat China’s rogue designs and to break the monopoly on 5G. 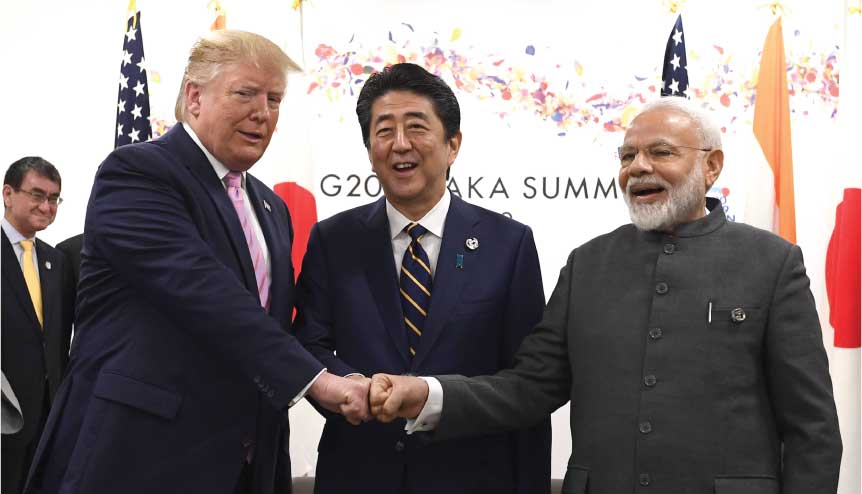 Modi’s diplomatic outreach and popularity with countries like the US, Japan and Australia has helped reimagine the possibilities of global diplomacy vis-à-vis the region.

With such hectic rearrangements in place between India, world powers and China, it won’t be an exaggeration to view the localised “Cold War” in the Himalayas as a new version of the Great Game played between the British and Russian empires over Afghanistan and Central Asia. Right from 1950, when Mao Zedong asserted Chinese control over Tibet by force of arms in a bid to end Tibetan Buddhism, to the so-called “Seventeen Point Agreement” of 1951 by which Tibet ceded to Chinese sovereignty, to the 1959 crisis and India’s decision to grant asylum to the Dalai Lama, the Himalayas has always been the volatile flashpoint of geopolitics in the sub-continent.

But cut 2020, and the game seems to have changed considerably. The premise of post-Doklam mutual understanding and the so-called Spirit of Wuhan between India and China have quickly evaporated thanks to Chinese actions and aggressions. The trust deficit mounts by the day – and, with a new-found belligerence, China seems to revel in its irresponsibility: whether in Hong Kong, Galwan Valley, the South China Sea or in transparently cooperating with the WHO on the probe into origins of the virus and its handling.

When Prime Minister Modi and Chinese President Xi Jinping met on the sidelines of a BRICS summit in July 2018 – their third meeting in just four months at the time – China had suggested a “2+1” summit with Nepal. The rationale for this mechanism was so that “China and India can jointly conduct a dialogue with a third regional country,” ostensibly setting the stage for a peaceful and diplomatic resolution to the Himalayan Cold War. 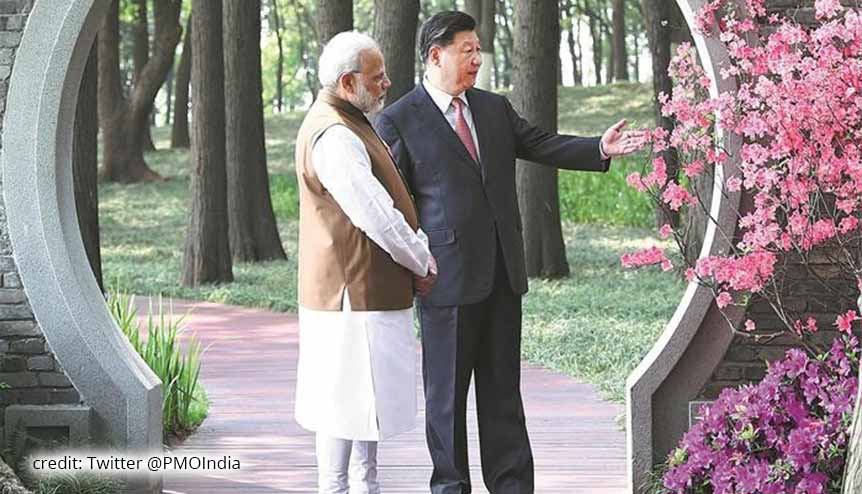 The so-called Spirit of Wuhan between India and China has quickly evaporated thanks to Chinese actions and aggressions.

With the Galwan Valley incidents, not only has the scope of such mechanism vanished, but the optics of India’s distrust and disappointment with China is hard to miss. Prime Minister Modi, who had embraced Chinese social media platform Weibo in 2015 and had amassed 244,000 followers, quit the platform immediately after the stand-off in Galwan. “After the government move of banning 59 Chinese Apps, PM Narendra Modi exits from Chinese social media platform WEIBO also. Strong message at the border, on economic front & at personal level too,” BJP general secretary BL Santhosh said while announcing the move.

Room for development in Ladakh 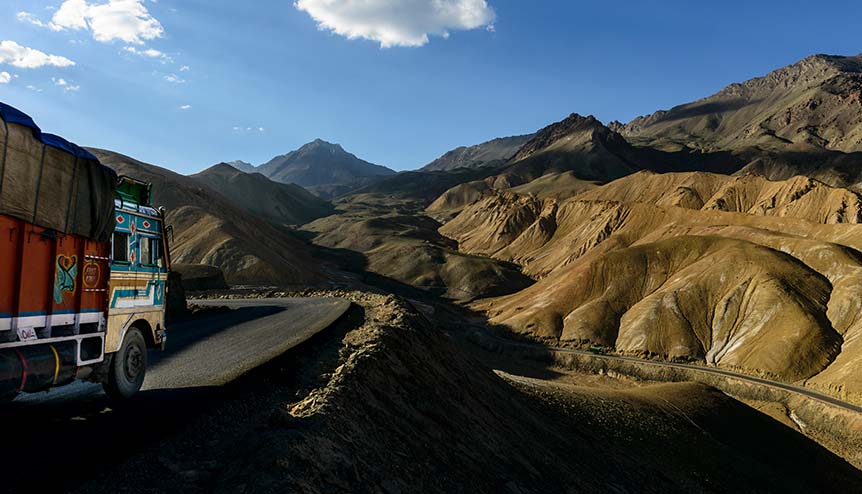 A truck driving on Srinagar-Leh-Highway. The recent infrastructure projects by the Indian government will also provide a massive fillip to its position in the Himalayas.

Some of the recent policies adopted by the Indian government will also provide a massive fillip to its position in the Himalayas. With the revocation of Article 370, New Delhi has been able to successfully rework its governance priorities in Ladakh – the region had traditionally remained neglected for a long time due to Article 370 and 35A. It’s also the rapid development of Indian infrastructure in this long-neglected area that drew China’s desperate ire in recent months.

“The way forward must have several components,” said Stobdan. “First, the Ladakh administration should distribute the entire stretch of vacant land in eastern Ladakh (from Chumur to Karakoram) among the population of the Leh district for agriculture, horticulture and other economic activities. Two, the government must expedite infrastructure airport/road network expansion in eastern Ladakh. The Indian Air Force must reactivate the Fukche/Loma airport for both civilian and military use. Attempts should be made to reopen and refurbish the old Chuchul airport base,” he advised. 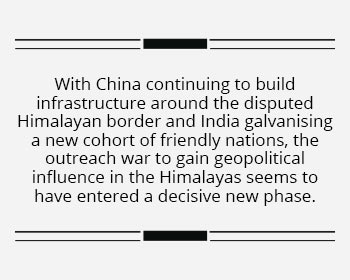 With China continuing to build infrastructure around the disputed Himalayan border and India galvanising a new cohort of friendly nations, the outreach war to gain geopolitical influence in the Himalayas seems to have entered a decisive new phase.

Throughout the 19th century, Great Britain was obsessed by the fear that another European power – France, Russia or someone else – would take advantage of the political decay of Islamic Asia, and this deep-rooted fear formed the fulcrum of the Great Game of that century. The Great Game found a new life with the 1979 advent of the Soviet–Afghan War. The months ahead will give us a clear indication how the Great Game of the 21st century will play out – and India is already firmly at the controls of what the French fondly call Le Grand Jeu.