A new page for India-Brazil ties

A new page for India-Brazil ties 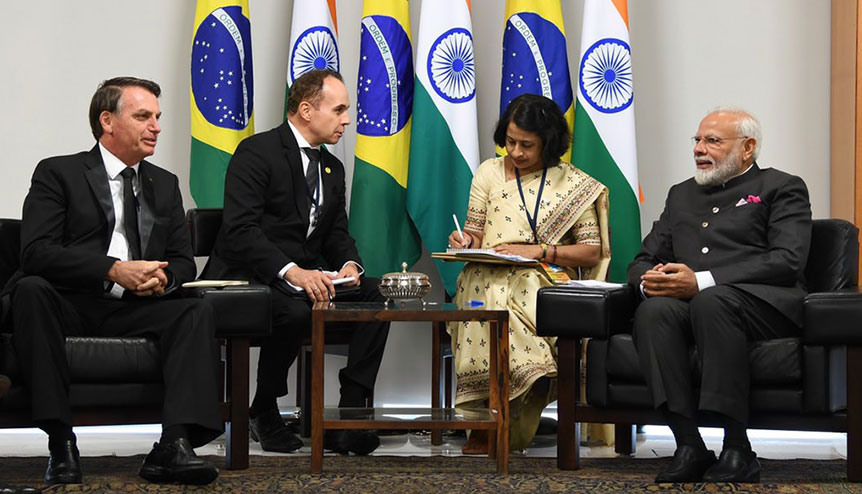 Brazilian PM Jair Bolsonaro’s visit to India as the chief guest at the annual Republic Day Parade could open up new avenues for strengthening the relationship between the two countries.

The only time Brazil, the largest country in Latin America, captures the imagination of India, the world’s second-most populous nation, is during the one month of World Cup Football every four years. India has never played in a World Cup, the most widely viewed and followed sporting event in the world, but almost invariably supports Brazil at the tournament which the Latin American nation has won the most number of times. It is almost as if football diminishes a distance of nearly 15,000 km between two of the world’s most promising economies.

It may appear a bit untimely then that the Brazilian President Jair Bolsonaro’s visit to India later this year as the chief guest at the annual Republic Day Parade would see the two nations embrace each other for a non-sporting cause. Bolsonaro is the third Brazilian President to be the chief guest at the event – heads of state of only four more nations have been accorded this honour more than three times. But unlike his predecessors, his visit holds more potential for furthering ties between the two countries.

The geographic positioning of the two nations notwithstanding, several factors are aligned in ways that bolster cooperation between the two. Both are on the same page on a range of international issues like global warming, UN reform, and trade negotiations at World Trade Organization (WTO) and also share common ideals and values like democracy, multiculturalism, diversity, international peace, and sustainable development. In the past, the two countries have also bonded well and supported each other on multilateral forums. They are part of the G4 along with Germany and Japan and have supported each other’s bid for a permanent seat in the UN Security Council.

They have also soldiered together against developed economies at the WTO on agricultural trade negotiations. It is a topic that connects the two countries intrinsically. Over the last decade, the BRICS forum has emerged as one of the most important groups of developing nations seeking to counter the dominance of a similar group of developed economies like the EU or the NAFTA. Even in today’s age of hyper protectionism that seeks to undermine the effects of globalisation, BRICS remains unshakeable.

There is still tremendous scope for enhancing the partnership further beyond the realm of global diplomacy. Economic bilateral ties are largely seen as that of a buyer-seller relationship. In fiscal 2019, bilateral trade was valued at about $8.2 billion with India exporting $3.8 billion worth of goods and importing goods valued at $4.4 billion giving the Brazil a slight edge. Petroleum products, mainly crude oil, cane sugar, copper ore, soya oil and gold make up most of what India imports from Brazil while diesel, organic chemicals and pharmaceutical products, man-made filaments, nuclear reactors, boilers, machinery and mechanical appliances, textile products are what it exports.

Brazil’s advantages in areas like energy, agriculture, defence, and space are things that India can benefit from. Brazil invests in urban transport, information technology, footwear, infrastructure, energy, and healthcare materials in India, while India invests in oil, renewable energy, mining, engineering, automotive services, information technology, and pharmaceuticals in Brazil. Even then, the trend on bilateral investments so far is not encouraging. FDI from Brazil into India was just $100 million in 2016 while India invested just about $4 million in Brazil.

A start has already been made. In the last week of 2019, the Indian cabinet approved the signing of an MoU on bioenergy cooperation. Brazil is currently the world’s second-largest producer and consumer of biofuels, which accounted for 18 per cent of its energy mix. India also has a strong focus in the area of biofuels and has set a target to achieve 20 per cent blending of ethanol in petrol and 5 per cent blending of biodiesel in diesel by 2030.

The MoU addresses a whole range of issues with regards to biofuels including the exchange of information on agricultural practices and policies regarding biomass for bioenergy, comprising sugarcane, corn, rice, oil-crops, and lignocellulosic crops. Further, it will also look into policies for reducing greenhouse gas emission levels based on the use of biofuels, using cycle analysis and the issuance of emissions reduction certificates traded in an organised market; trade aspects and the promotion of a joint position to address market access and sustainability of biofuels, including advanced biofuels; engine and fuel modifications and adjustments that may be necessary for different percentages of biofuels blended with fossil fuels.

Bolsonaro’s will only accelerate the process of bridging the gap between the two nations. With an aligned world view and the absence of any contentious issue, what also helps is that the two countries are led by nationalistic leaders who enjoy confidence back home and share common perspectives on the most pressing issues of the new decade. Beyond Brazil, Bolsonaro’s Republic Day visit promises to open up new vistas for India into Latin America at large.