A new great game has begun in Asia

A new great game has begun in Asia 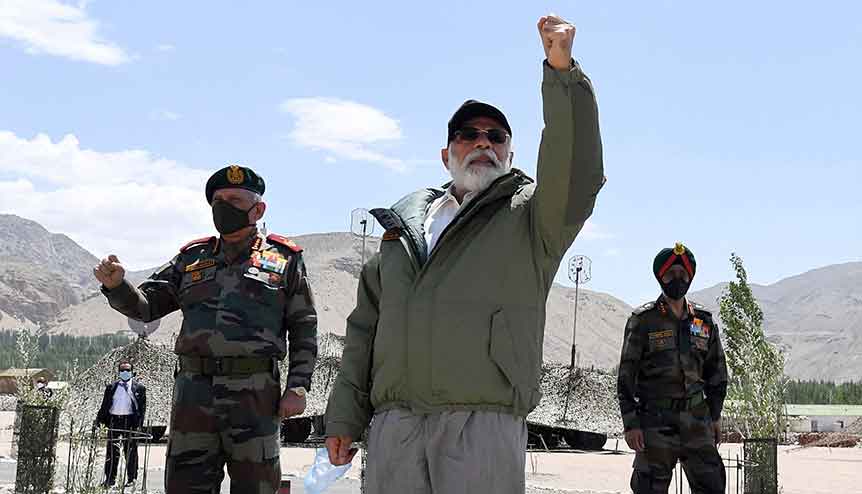 Modi’s visit to Ladakh and his address to the Indian troops stationed there was a clear signal to China that India will not step back from the confrontation. With India not backing down, Beijing runs a serious risk of losing face before the world unless it finds a way of de-escalating the crisis.

By making an announced visit to Ladakh and addressing Indian troops there, the Indian Prime Minister has indicated that India will not step back from the confrontation with China at Galwan Valley and elsewhere. Without mentioning China by name, he pointedly said the age of expansionism was over and that “history is witness that such forces have been wiped out or have been forced to turn around”.

Related stories: Away from the border, India targets China in the economic battlefield

In the Asian cultural context, “face” is very important and “losing face” is the equivalent to defeat. By unilaterally escalating the border dispute with India, Chinese President Xi Jinping was signalling to the world that China had arrived on the world stage as the new hegemon and expected every other Asian country to acknowledge its supremacy. If China cannot come out of the Galwan Valley skirmish as the decisive victor, it will lose face before the rest of Asia. Even an honourable draw will be interpreted in Asian capitals as China’s inability to enforce its will on India and, hence, be seen as a defeat.

Modi has cleverly turned a challenge into an opportunity by creating a Catch-22 dilemma for Beijing. At such high altitudes, China cannot bring its conventional military superiority to bear against the battle-hardened Indian army which is proficient at fighting at such heights and in sub-zero temperatures thanks to its experience in Siachen, the world’s highest battlefield. Yet, to quietly withdraw will be admitting to the world that the People’s Liberation Army (PLA) cannot win such a war.

The Indian Prime Minister told his troops: “Stories of your valour are echoing in every house. Mother India’s enemies have seen your fire and fury. ” But his real audience was thousands of miles away in Beijing. By actually visiting the frontlines and addressing Indian soldiers, he was throwing down the gauntlet at the Chinese.

Opening a new front in Bhutan

Perhaps blind sighted by this stiff show of resistance, China has opened another front by claiming portions of Bhutan as its own. Its strategy clearly is to open another front against India and “punish” smaller states for siding with India. This is in keeping with its policy of incremental expansionism. And its warning to “third parties” to keep out of this dispute is a stratagem to see how far India will be willing to go in this high-stakes game of international poker.

By opening another front, this time in Bhutan, Beijing is trying to keep India distracted and its military planners guessing. But as the 73-day Doklam stand-off in 2017 showed, Modi is not the type of leader who can be browbeaten or forced to retreat. Nor will he abandon a friendly country to please China.

Onus on China to de-escalate

With the world steadily turning against China in the wake of the Covid-19 pandemic and its brazen expansionism, the onus is on Beijing to find a face-saving way of de-escalating the crisis it has created with the disputed border with India.

Clearly, what we are seeing is the beginning of another iteration of the 19th century Great Game being played out this time between the two largest countries in Asia.